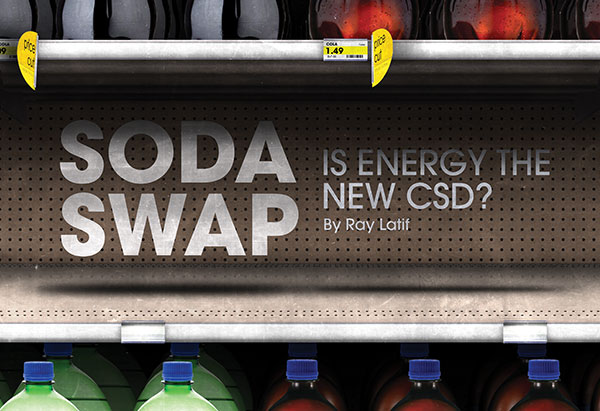 It’s well-known that consumers are consistently and, in ever greater numbers, shunning carbonated soft drinks. Negative consumer perception of the products, based on their often high calorie counts and use of artificial sweeteners, have led to plummeting sales, with net volume down 3.2 percent in 2013. CSDs still represent the largest of beverage categories, however, their presence in coveted cooler doors and long grocery aisles is slowly, but surely, dwindling.

While the energy drink category has been one of the biggest beneficiaries of reduced shelf space for CSDs, there is significantly more room to grow. That notion is buoyed by sustained consumer demand for energy products, growth of which is driven by an overall shift toward functionality.

“One of the biggest trends we have seen in the CPG industry over the past decade is… consumers are looking for beverages that do something for them,” said John Showalter, Director of Business Insights, Red Bull North America. “Energy drinks provide the functionality of an energy boost, and not only that, consumers are willing to pay a premium for it.”

Although energy drinks represent just 2 percent of the overall domestic beverage market (as reported in a May, 2014 article in Forbes), from a retail perspective, store operators are increasingly aware of thriving demand in the category and remain drawn by the allure of selling a beverage that, at $2-3 per unit, offers a significantly higher profit margin as compared to CSDs.

According to a recent Wells Fargo Securities survey of retailers representing 15,000 U.S. convenience store locations across the U.S., energy drinks are sold at a nearly 40 percent margin, while CSDs sit at 30 percent. The gap has motivated C-store operators to expand their energy drink sets, which currently comprise about 20 percent of space on retailers’ shelves. Survey respondents believe that number could quickly rise by 50 percent to over 30 percent of total shelf space. 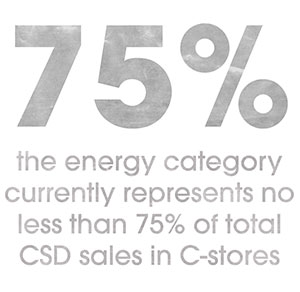 Based on Nielsen Scantrack sales data provided by Red Bull, the energy category currently represents no less than 75 percent of total CSD sales in C-stores within the 52 week period ending on May 17, 2014. In all channels combined, energy totals 30 percent of all CSD sales. Moreover, as dollar sales for energy drinks grew nearly 6 percent to $6.67 billion in measured channels in 2013 (according to IRI, a Chicago-based market research firm), Red Bull saw energy drinks reach 50 percent of CSD volume in all channels combined within mature markets for the category.

While Showalter does not necessarily think energy drinks are taking share from CSDs, he believes energy will continue to outgrow total beverage as consumers, particularly those in emergent demographic sets, look “for more options and variety in their beverage consumption.”

“First of all, energy drinks over-index among Hispanic consumers and millennials,” Showalter said. “These are the two consumer groups that are forecasted to grow the most in terms of population and spending power. Second of all, the consumer trend toward functionality is here to stay.  As energy drinks become even more mainstream and reach more consumption occasions, the category will continue to grow.  Finally, product, in-store, and marketing innovation will deliver category growth.”

Jerry Reda, the chief operating officer of Big Geyser, one of the largest independent non-alcoholic beverage distributors in the U.S., echoed that sentiment, especially for growth of the category within metro New York. In 2013, Big Geyser took over distribution of Monster Energy in the region from the Coca-Cola Co. and Anheuser-Busch. Reda said that the brand has since become the fastest growing in the company’s portfolio.

After visiting the West Coast to gain a better understanding of the market for the energy drinks, Reda believes that Big Geyser can increase its energy business by “five-fold over the next three to four years.” Impressed by the amount of space that West Coast retailers in drug, convenience and grocery channels had dedicated for energy drinks, Reda views New York as “very, very under-spaced” for the category, and, despite growing retailer interest for energy drinks, is at the forefront of a push to dramatically ramp up shelf space for the category.

Describing Red Bull as “a category management organization,” Showalter is similarly looking for ways to increase room for energy drinks, albeit within the context of how retailers can optimize total beverage space. Showalter recommends that retailers take what he described as “a blended approach” taking into consideration dollar volume, unit volume, profit and future growth. 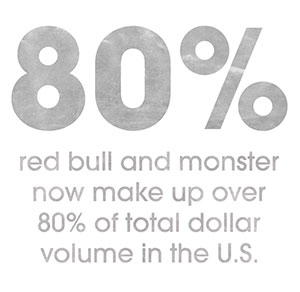 “What we find is that, generally, the energy drink category is under spaced in terms of these metrics,” he said. “As the energy category continues to consolidate into the top two brands (in fact, Red Bull and Monster now make up over 80 percent of total dollar volume in the U.S.), we fully expect that the shelf space should reflect consumer preferences. Top performing brands and SKUs should take precedence over secondary and tertiary brands that add little value to the energy drink set.”

The big three soda companies, Coca-Cola, PepsiCo and Dr Pepper Snapple, despite each placing greater resources and emphasis on growth of their company-owned energy products, have been unable to make a significant dent in the category dominance of Red Bull and Monster. In recent weeks, however, Coke has achieved far greater returns on sales of its energy drinks, which include NOS, than Pepsi and Dr Pepper. Recent Nielsen data published by Wells Fargo Securities show year-over-year sales of Coke’s energy drinks up 24.2 percent in dollar sales growth and in 14 percent volume growth for the four-week period ending on April 12, 2014.

But the big question is, will they serve the same purpose for consumers, refreshment, that CSD’s have for so many years? The answer may provide a clue to how these categories ultimately coexist.

Reda noted that flavor innovation for energy drinks has improved so dramatically that consumers are replacing sodas with energy products for a range of consumption occasions, including general refreshment and even as a meal pairing.

Reda offered an account of a Monster sampling event at Penn Station in which consumers not only expressed satisfaction at the functionality of the brand’s products, but praised the taste and refreshment of the energy drinks as well.

“I can’t tell you how many people say to me [Monster Ultra] tastes like a cross between a Sprite and a Fresca,” Reda said. “They can’t believe how refreshing it is and how there’s zero calories and zero carbs in it. It doesn’t taste like a diet drink. That innovation is allowing us to grab new drinkers.”

With flavor profiles approaching that of traditional CSDs, energy drinks have opened the door to a range of new consumption opportunities, particularly those in which individuals have sought an energy boost via caffeine from colas and coffee. Kantar Worldwide, a consumer insights group, notes that “the consumption occasion between lunch and dinner is growing in importance for energy drink consumers – where consumers are seeking a quick (yet tasty) boost.” Kantar stated that “the majority of these occasions take place at work or in commute.”

Red Bull, Monster and Rockstar have leaned on innovation to take advantage of these consumption occasions as well as increased consumer demand for reduced calorie products and functionality. Two years ago, Red Bull launched Total Zero, while Monster debuted its protein-infused Muscle Monster in 2013; both product lines have been huge drivers of new sales for the companies. Yet while Monster sells nearly three dozen varieties, Red Bull carries just six products in its portfolio.

Showalter explained that the company’s approach to product development certainly differs in terms of frequency of new releases, but that it is “always based on consumer insights and delivering on unmet needs,” as a way to expand its reach and grow the overall segment.

“Once we launch a new product, we fully support it with in-store messaging, advertising campaigns and nation-wide sampling,” Showalter said. “While we can’t say what our future plans are for product innovation, you can bet that it will be rooted in consumer need and bring new users into the energy category.”