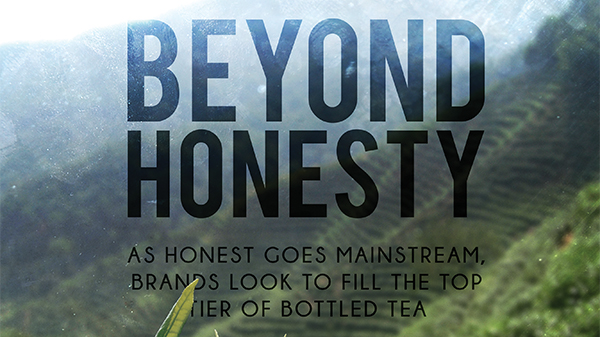 Whole leaf, real-brewed bottled tea was hardly in vogue when Seth Goldman and Barry Nalebuff showed up on the scene with Honest Tea in 1998, but 18 years later their company is crushing it. Fueled by consumers’ migration towards healthier refreshment options and “just a tad” bit of help from The Coca-Cola Company’s distribution network, Honest stands today as the top-selling organic bottled tea brand in the United States, having found success well beyond natural and organic grocers, even moving on a final frontier: the convenience channel. In April the company announced arguably its most mainstream move since its acquisition by Coke in 2011: Honest’s entry into Wendy’s nationwide.

“It’s another breakthrough,” Goldman says with excitement of his brand’s placement at the fast-food chain. “And we did it without dumbing it down. It’s still organic. It’s still fair trade. We didn’t take any shortcuts.”

It’s largely true that Honest’s success has come without compromising the contents of its bottles. But with the brand’s increase in plastic packaging, line extensions of the canned and carbonated varieties, and frankly its mere presence at a Wendy’s, it’s not a stretch to say that Honest’s crossover success has seen the brand’s positioning shift away from that of an upscale premium product. Pricing is the most common indicator of the phenomenon. The brand, playing by conventional grocery rules, is no stranger to the buck-a-bottle promotion.

Which is fine, by the way, but Honest’s ability to bring a high-quality organic product to the masses at a value price begs the question of how much consumers care about the next level: an upper echelon of premium teas, outside of just the general organic, non-GMO and fair trade trends that are being seen across all food and beverage categories. Can ready-to-drink tea enjoy a full-on “third wave” like coffee currently is, and if so, what’s it going to take to get there?

By third wave, we mean higher production value, higher cost, cutting edge quality to set it apart from the store hierarchy. The ever-premiumizing Harmless Harvest company took a stab at that third wave with a cold-brewed, “raw” Namacha line in a couple of brand iterations, but finally gave up on it earlier this year. Does that mean closing the book on high ring, high end tea items? 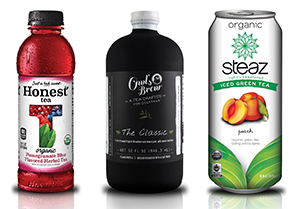 Folks aren’t done yet. At this point, going organic, non-GMO, and fair trade is more dotting the i’s and crossing the t’s than it is offering innovation, however, so establishing a significant point of differentiation is critical for brands aiming to establish themselves as top tier products worth a premium price tag. Chicago-based Inko’s, for one, sees opportunity in the premium tea space. It anted up recently, checking off organic certification and non-GMO from its to-do list earlier this year. Prior to its acquisition by Wholesome Tea last year, Inko’s had gone down market with at least some of its offerings – a canned energy drink line, a 64 oz. family size plastic bottle. Now, it’s the prestige of its rare and highly prized white tea that Inko’s Chief Marketing Officer Andy Horrow says will position the brand to win in Gen 3 of tea.

“That’s what we hang our hats on,” says Horrow. “That our white tea is the least processed tea, that it’s the richest in antioxidants, and its subtle taste too.”

Other people are going for it too. Less subtle tea varietals like shincha, oolong and the currently white-hot matcha also seem to gaining traction, positioned as a specialty product with their ceremonial feels accompanying their functional health benefits. But for all its excitement amongst tastemakers, matcha is still a product that strays pretty far from what the average American palate may be ready for. Production-based Japanese tea giant Ito En has looked to capitalize on that buzz while accounting for that, introducing their new Matcha LOVE blended with green tea and flavors like vanilla and ginger to offer a matcha experience in a delivery system tailored to North Americans – plus no whisk required.

“These under-the-cover trends are now emerging and people are looking where to latch onto,” says Adam Hertel, Vice President of Grocery & Natural Sales at Ito En North America. “So we’re helping to drive these trends and educate the U.S. market and lean on the fact that we can do this where other companies can’t because it would require sourcing and vertical integration from Japan.” 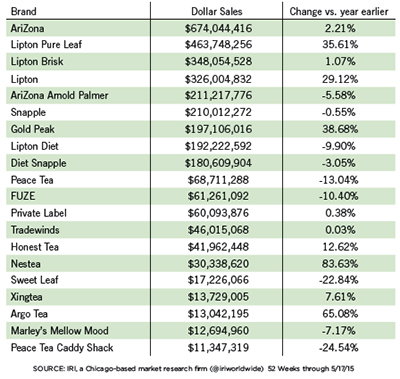 New York-based Owl’s Brew, founded by admitted “tea-drinking boozers” Jennie Ripps and Maria Littlefield, has also gone up-market, inserting their teas into the trending cocktail mixers category; meanwhile, Chicago-based Argo is banking on the prestige of its brick and mortar shops along with a nifty packaging play.

Eric Skae, former CEO of New Leaf Brands, points to the education of the functional aspects of these products as a critical component of marketing a premium tea.

“Most people still look at iced tea as only a refreshment beverage and there’s a limit to how much people will pay for refreshment,” says Skae. “Brands need to focus on that functionality aspect as well. That’s what got people to pay $3 for a coconut water or $9 for a green juice.”

So innovation, education, and maybe a little bit of patience? Consumers likely aren’t going to go from Big Gulps to matcha in one fell swoop, which would explain why commodity brands like PepsiCo-owned Pure Leaf and Coca-Cola’s Gold Peak and Fuze (who both just joined the company’s billion dollar brands club) are performing so well currently.

“That’s the natural progression,” says Eric Schnell, CEO of brand consulting firm MetaBrand and co-founder of Steaz, a organic and fair trade green tea brand. In cans and at a minimum premium price, Steaz, like Honest, targeted the value-conscious organic consumer more than those seeking a luxury brand, but they too had to play the waiting game in regards to what kind of tea the American consumer was ready for.

“When we first launched in Target in 2008 we didn’t perform well enough to get another rotation,” Schnell, who left the company in 2010 adds. “Seven years later it’s back in Target and flying off the shelves. Time cures a lot.”

From the New York Post naming it “New York City’s hot new cult,” to its spotlight on NBC’s “The Today Show,” to co-signs from the likes of Cindy Crawford, Dr. Oz and Cameron Diaz, a recent wave of publicity has thrust matcha in front of the eyes and ears of the general public. And while the explosion of coverage from mainstream media might suggest otherwise, the popularity of the Japanese powdered green tea beverage is hardly an overnight success story. In fact, matcha’s got a history that dates back centuries, so what’s with all the fuss now?

The rise of brick and mortar stores offering a matcha cafe experience like Brooklyn’s MatchaBar have further accelerated the buzz, but if matcha’s truly poised to go mainstream, it will likely require more than the visibility the current hype cycle is providing. To make the entry point into the product more accessible, brands like Jade Monk, Vivid Drinks, Motto and Teapigs have ushered in matcha in a flavored, ready-to-drink bottled format, galvanizing existing tea drinkers looking for innovation while also bringing new users into the fold who are intrigued by the beverage’s antioxidant-rich and clean energy properties.

“Getting the consumer to buy a tin of matcha, a whisk, and a bowl is a lot of hardware,” says Tea Pigs’ US General Manager Matthew Wood. “So for this to be a long term permanent trend, the idea is to get matcha in front of more people and find new ways to make it approachable.”