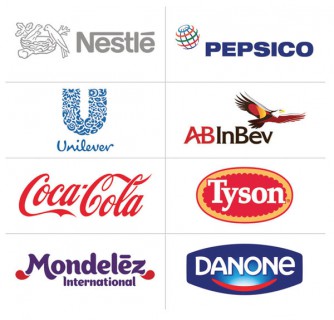 The hurt is accelerating for big CPG. Every single one of the largest eight food and beverage companies had U.S. sales declines in Q1 2016 vs. 2015. This is the “Who’s Who”: Nestle. PepsiCo. Unilever. AB Inbev. Coca-Cola. Tyson. Mondelez. Danone. Together, the sales of this group in this short time period — just one quarter — declined a whopping six percent, or $5.5 billion.

To put this in perspective, in all of 2015, the top five largest CPGs lost $13 billion in sales. Which was already pretty darn bad. But it looks even worse because all this decline is happening while spending on food and beverage is increasing. In 2015, the U.S. consumer packaged goods (CPG) industry grew over three percent from $648 billion to $670 billion – the strongest growth rate registered in four years.

The winners here were the little guys. Almost half of that $22 billion went to small ($100 million to $1 billion in IRI-measured sales) and mid-size companies ($1 billion to $5 billion).

For the large players, the pain is real. The numbers show that consumers are willing to pay and are spending but their money is flowing away from the CPG giants. The largest reason, perhaps, is the crossing of consumer distrust of big food and their associated legacy brands with the long-term and accelerating movement towards healthier, “cleaner” foods. Inevitably, that leads consumers to brands created by and driven through smaller, more nimble companies.

We know the stock market rewards growth and punishes declines — even declining growth rates — so for the big guys, doing nothing is not an option. But they see these long-term trends, and are acting. While innovating, incubating and reformulating from within embody a set of tactics that are available internally for the big strategics, like Kraft announcing the removal of artificial colors from their signature Mac n’ Cheese, let’s focus instead on the big-ticket, highly-visible moves that have accelerated dramatically over the past few years: Large companies acquiring smaller ones and also investing in relatively early-stage, fast-growth companies. 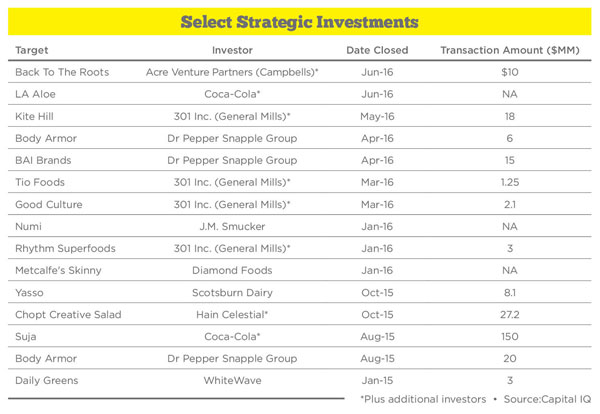 It’s perhaps the most important thing the large companies are doing, for many reasons. Larger companies tend to move very, very s…l…o…w…l…y… Entrepreneurs know that innovation requires action and taking risks. Standing still kills. But the risks with innovation are real. The fact is that the vast majority of new brands fail. One stat consistently cited by a large strategic is that less than 95 percent of brands ever reach $10 million in retail sales. They all don’t die, but most do. Also, many of today’s successful brands and products look nothing now like they did when they began. Plum Organics, for example, markets a leading baby food primarily sold in shelf-stable pouches. It started out as a tray of frozen food ice cube-like blocks. This was a great brand in a product format extremely difficult to scale.

But small brands need the system too. If large companies did not acquire small ones, investment capital would not easily flow to smaller, emerging brands, and innovation would stall. Simply put, the big boys buying the small ones matters. The purist from Boulder may not like that “their” brand “sold out”, but if “their brands” never could or had plans to sell, how would they have been able to raise money from investors expecting a return commensurate with the risk? So, for all of us who love and crave the innovation, these acquisitions are a very good thing. The chart below lists some recent, high-profile acquisitions. 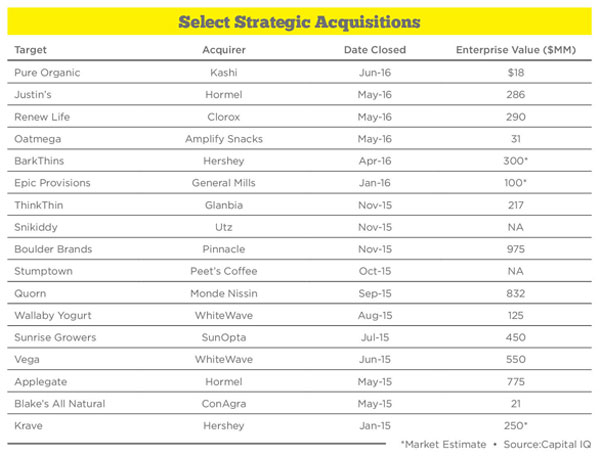 Another accelerating trend is large CPGs investing in smaller companies. This, too seems to be happening more than ever before, in many different ways. Some large CPGs have created visible (branded) investment arms (like Kellogg’s 1894 Ventures, General Mills’ 301 Inc., and Coca-Cola’s Venturing and Emerging Brands group). Others have created funds run by people outside of the CPG space, like Mars’ Digitalis Ventures and Campbell’s Acre Venture Partners. Some invest but don’t have a branded fund or group name (J.M. Smucker, for example) while others invest and just don’t announce anything (that’s the beauty of the NDA) and then others invest as limited partners in a traditional venture capital fund. The complications grow, as well: some invest with an option or right to acquire the companies in which they have invested; some do not; and some won’t say (investing with a path to acquire is commonly referred to as a “two-step” deal).

Beyond format, the questions are obvious:

1. Why are the large CPGs doing this?

2. As an entrepreneur, should I look to these CPGs as investors for my company?

The first answer is easy: The large CPGs are doing this because they need to reverse the hurt.

The second is more complicated: In general, we at Whipstitch Capital are advocates for smaller companies working with and talking to large strategics. But as visible from the complexity above, the types of deals can be extremely diverse in nature and very complicated. We always suggest you get good advisors in place, ask hard questions and think through (and then protect your company) as much as possible with every negative (and positive) scenario. It’s simple advice, but not easy to implement. Still, if you are an emerging, fast-growth CPG brand interested in eventually selling to a larger company, think about what is happening in the CPG world today, what brands are being acquired or invested in and why, and ponder your next strategic move. Perhaps you will be in one of these charts next year!