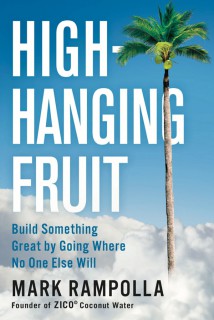 Mark Rampolla, the founder of Zico, brings us into the jungle, the store, the boardroom, and the distributor with the publication of “High Hanging Fruit – Build Something Great by Going Where No One Else Will.” It’s a thoughtful treatise on the journey of the conscious entrepreneur.

For Rampolla, now an investor and author, the journey ended with the sale of the coconut water brand to the Venturing & Emerging Brand Unit (VEB) of the Coca-Cola Co. The battle for the category rages on, but Rampolla takes time to reflect in High Hanging Fruit.

The story excerpted here came at a critical time for the brand: the growing awareness of coconut water in the industry, and his own branding ideas, had gotten the company distribution with powerful New York wholesaler Big Geyser. But it hadn’t yet become an item that pulled off the shelf, and so attempts to get Big Geyser’s independent route drivers to back the brand – a key element to winning in the city – hadn’t proven fruitless. The company was losing money and time, and competitors were in the market as well. Rampolla had to find a core consumer.

Excerpted from High-Hanging Fruit: Build Something Great by Going Where No One Else Will in agreement with Portfolio, an imprint of Penguin Publishing Group, a division of Penguin Random House LLC. Copyright © Mark Rampolla, 2016. 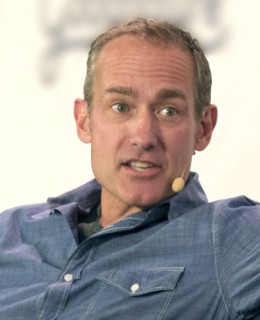 After my disastrous speech to the Big Geyser route owners, I quickly realized that the Geyser contract wasn’t going to be Zico’s breakthrough moment. After our spring “launch” everyone at Big Geyser, from the top management on down to the route owners, told me: They weren’t going to go out of their way to make Zico a success. Until I proved beyond a doubt that store owners were going to stock the brand and that people were actually interested in buying and drinking it, I was just some wannabe entrepreneur who was getting in their way.

Building the brand was my job and—as much as I would have loved a sudden increase in sales—Big Geyser was actually doing me a favor by reminding me of this fact. If your brand communicates personal meaning, turning it over to someone else, especially a distribution business, isn’t going to work. Early on it’s critical that you find the people who understand the meaning your product and brand embodies. You don’t just want customers, you want converts.

When we conceived of Zico we had in mind consumers who would not just buy ouor beverage but become my brand fanatics. So who were they? Of course I had my Google alerts set so that anytime anyone mentioned the word “Zico” on the internet, I’d get an e-mail notification. If I needed my spirits lifted, clicking on those links would always do the trick. Zico was building a great reputation on blogs devoted to yoga, running, health and better living in general. Watching the blog posts and the comments they elicited, I could witness in real time, consumers sharing information and trying to figure out what Zico was all about.

“I have recently become hooked on coconut water. It has a very light and refreshing taste and more potassium than a banana,” wrote a blogger who called himself NYnerd. “All over the tropics people drink coconut water everyday, but here in New York it’s very new on the scene. You heard it here first, Zico is the next Snapple.” I might have been the only reader of NYnerd’s blog, but I can’t tell you how a personal plug like that boosted my spirits.

Zico wasn’t an easy sell in many settings and it wasn’t the sort of product that you could expect to gain momentum by simply randomly putting it on store shelves. I knew this from having spent days in the aisles of Costcos around the tri-state area, pouring out samples of Zico. The spark never took. Selling to suburbanites who had carts filled with Coke 6-packs and cases of beer wasn’t going to work.

In other settings, however, our message seemed to resonate: Zico was a natural sports drink packed with electrolytes and the perfect form of post-workout (or night out) replenishment. The triathletes, who are notoriously obsessed with what they put into their highly toned bodies, were at first suspicious of the free Zico we tried to hand them at the end of their races. But after only a few of these events, herds of racers followed the winners right up to our tent after they crossed the finish line and asked where they could buy more for their daily workout.

When I talked to the yogis and people who managed yoga studios, especially hot yoga, Zico was an easy sell. Bikram Yoga, which was becoming increasingly popular, offered a challenging routine of 26 positions over 90 minutes in studios where the temperature was cranked to 104 degrees with 40 percent humidity. You finish these sessions dehydrated and deeply thirsty. Studios stocked crossover sports drinks like Vitaminwater but they generally didn’t like the idea of selling their customers a big dose of sugar after a workout intended to improve bodies and calm minds. That Zico was a balanced and natural way to rehydrate seemed especially relevant to Bikram students.

The yoga clientele is where I first got the sense that Zico had its own momentum—that there were other people out there advocating for the brand. At the time a few hundred hot yoga studios existed across the country, mainly in hip-urban communities that Whole Foods was also targeting. In many of the studios Zico was taking the place of Vitaminwater as the go-to after-class drink. So I figured building awareness and “paid sampling” in the yoga studios would help when we expanded into Whole Foods by creating brand awareness and a passionate base of consumers.

One day I got a call from the manager of a Bikram studio in San Francisco. He told me that some of his clients were from New York and that after classes they’d ask him how he could run a hot yoga studio without selling Zico? What exactly was this Zico stuff, he wanted to know, and how could he get some? So I began to do a healthy business shipping to Bikram studios in major metropolitan areas.

To get to know these customers better I began to take Bikram classes around New York. The demographic was a marketer’s dream: the clientele were in their mid-20s to mid-40s, fit and if the labels on their tote bags were any indication, fairly well to do. I also had the gut feeling that I was surrounded by early adopters; they were cultural leaders, who were the first to try something new, and had already brought other major brands into prominence. Lulumeon, to take the best example, had appealed to this same demographic and was on its way to be a billion dollar brand selling yoga wear. Watching these yogis buy Zicos for each other and guzzle them, often in one long gulp, made me certain that these were our brand’s potential fanatics. Here was an audience that reflected what we had built Zico to represent: people intent on taking personal responsibility for their spiritual, mental, and physical health through hard work and developing a personal understanding of their natural selves.

The obvious passion this population had for Zico had more value than the sales it generated. Not only were they acting as brand ambassadors, each yoga studio also became a pin in the map indicating the geographic areas that would be most receptive. Once we sold into the yoga studio, the next stop was the bodega on the corner and then the one down the street. With this knowledge about our core consumers—our potential brand partners—I had a new way to approach and utilize our partnership with Big Geyser.