Cold-pressed juice is still a work in progress.

The success of super premium juice in recent years has prompted the category’s movement from the natural and specialty channels into conventional retailers. The mission, of course, is to bring these high-quality, high pressure processed (HPP) juices to the masses. But the question of how far from Manhattan and Los Angeles can $8 juice go still remains. If the answer’s not very far at all, then what’s the sweet spot in pricing for HPP juice, and what will it take to get there?

For category leader Suja, which has long proclaimed its goal to be the democratization of organic juice, its move into the mainstream has been behind its “Essentials” line, launched in 2014, which has brought the price of its product from the $5.99 – $7.99 range of its “Classics” down to $3.99.

It’s found increasing traction in mainstream accounts. Upon the announcement of the Coca-Cola company’s investment in Suja in August of 2015, CEO Jeff Church told BevNET the company was on pace for sales between $70-80 million that year. According to multi-outlet sales data from Chicago-based market research firm IRI, Suja recorded $30 million in sales in the conventional channel in the 52-week period ending July 10, 2016. 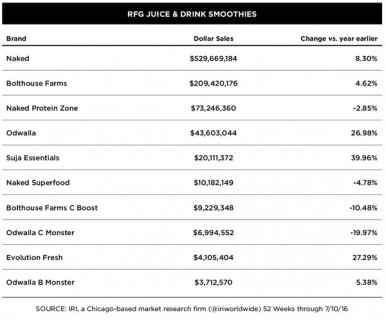 What’s still not clear is the overall interest the brand will have as a repeat purchase for conventional consumers.

Getting Suja’s price down has been achieved by vertical integration (bringing HPP in house), its alliance with a large CPG (Coca-Cola), but also by way of smaller sizing (16 oz. to 12.5 and 10 oz. options) and more fruit-forward (less expensive) juice blends. But are packaging shrinks and cheaper ingredient profiles making the super premium product less premium?

“That’s the challenge a lot of these brands are facing,” says Brad Barnhorn, a longtime investor and advisor in the natural food and beverages space. “How do you preserve what made the category truly unique and what made these products great while having price points that are movable into new channels?”

Of course that’s not a situation that’s unique to Suja – or HPP juices in general – by any means.

Barnhorn’s experience seeing premium food and beverage brands successfully migrate out of the natural channel, for example, dates back to the last wave of premium juice. As the founder of Fantasia Fresh Juice Company, Barnhorn’s Midwest fresh juice and smoothie brand was acquired by private equity firm North Castle Partners in 2000, where it was merged with Naked Juice as part of a roll up that saw other regional brands including Fresh Samantha get acquired before all of Naked was sold to PepsiCo in 2006.

Lou Marinaccio, the managing director at North Castle, served as COO of Naked leading up to its sale to PepsiCo. He sees parallels with the current environment.

“For any given value proposition the question is how big is the pool of demand,” says Marinaccio. “[With Naked] we ultimately saw that consumers would pay $3.00 for a single-serve juice in those markets we weren’t in. The question today is whether that same extrapolation model can still hold as the price frontiers get higher and higher.” 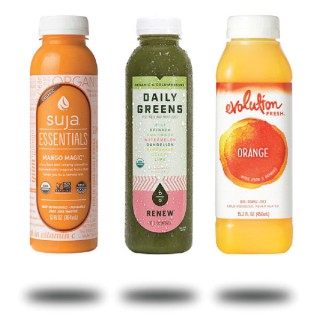 Looking further back, and beyond beverage, John Maggiore, founder of Maggiore Sales & Marketing, and the former natural category manager at Stop & Shop supermarkets, likens the downward pressure on pricing in premium juice to the premiumization of ice cream in the 1980s. He saw Ben & Jerry’s mainstreaming another level of premium in the ice cream category. So what will happen? There will be growing pains, he says.

“For a while [Ben & Jerry’s] sales were stagnant or even slightly down because they had to keep the price down to be able to compete with the larger major competitors,” says Maggiore. “The bet was that once they built enough mass they’d be able to get the costs down, which I think is what you’re seeing in super premium juice.”

Ben & Jerry’s, of course, was eventually acquired by Unilever, while Haagen Dazs was bought out by General Mills, which speaks to the critical importance of CPGs (or deep, deep pockets elsewhere) in allowing a premium brand to achieve mainstream success in conventional retailers.

As it stands, four brands in the super premium juice segment have strategic backing – Suja with Coca-Cola, Evolution Fresh with Starbucks, Blueprint with Hain Celestial, and Daily Greens with White Wave Foods. Naked itself, and Campbell’s-owned Bolthouse Farms are also strategic HPP plays. With prices what they are, beyond the natural channel, there may not be much room for more. By most accounts, once a market has grown to three or four national players serving the full spectrum of channels, it’s not easy being number four or five.

“There’s really this winnowing effect that occurs with brands going into the mainstream and that’s a result of the domination of the large CPGs,” says John Giannuzzi, managing general partner at Sherbrooke Capital. “They set the bar on pricing and promotion and slotting fees and so you have to play the price promotion wars and that’s not for the feint of heart. The brands that establish themselves will have to have enough capital to power through that.”

Gianuzzi’s familiar with this fight right now through premium gelato brand Ciao Bella, of which Sherbrooke is its principal investor. Despite the considerably higher manufacturing costs of producing gelato compared to ice cream, Ciao Bella is priced in line with the premium ice cream category, in order to compete. But winning means that consumers in those conventional channels are going to have to understand the value of what the price is once the product really feflects is true cost to make.

“People generally understand the difference between gelato and ice cream but that still hasn’t given us the license to price at a premium to Haagen Dazs,” Giannuzzi adds. “You can really only get away with that in the natural channel.”

That type of consumer awareness, of the difference between gelato and ice cream, is something Giannuzzi says will also need to take place in cold-pressed juice, to see the category find success in mainstream channels.

“With HPP juice there’s a massive education process that needs to occur to convince the mainstream consumer this product is twice as good as what they already think of as a premium product in a Naked or Odwalla or Bolthouse.”

No, Not the Beyonce Album

The Coca-Cola Company’s commanding lead in the lemonade category has only been strengthened by the beginning of a return to form for Hubert’s, the Hansen’s brand it acquired in its 2014 purchase of a 16.7 percent stake in Monster. Up to $18 million in sales in 2014, Hubert’s sales fell below $15 million a year ago. Now they’re up 5.29 percent ($16.5 million) in the 52-week period ending July 10, 2016, according to data from Chicago market research firm IRI.

Along with a recent marketing push from Coke, in June, Hubert’s added a PET bottle to compliment its glass packaging, presumably to make way for the brand to move into new occasions and venues.

Dollar sales of Coke’s primary lemonade player – Minute Maid – were up 11.98 percent while PepsiCo-aligned Lipton was up 10 percent, bringing in $84.6 million and $51 million, respectively. Third place company in the category, King Juice, maker of Calypso Lemonades, is hot on Lipton’s tail though, outpacing the growth rate of the category leaders, up 14 percent with $48.7 million in dollar sales.

Sparkling Ice’s lemonades, which parent company Talking Rain launched in 2013, appears to have stumbled a bit (down 10.2 percent), but remains big business, bringing in $66.1 million for the period. Pulse Beverage Company’s Cabana Lemonades continue to struggle, down to $2.28 million in sales from $2.62 million a year before.

Innovation in the lemonade category isn’t appearing in the numbers but there are interesting things occurring in the space. Brands like Honeydrop and Sweet’tauk are bringing the excitement around cold-pressed, high pressure processed (HPP) juice into the space. At BevNET Live in June, New Beverage Showdown contestants Leaf & Love and 4Pure had lemonades sweetened without sugar, instead using stevia and maple syrup, respectively.