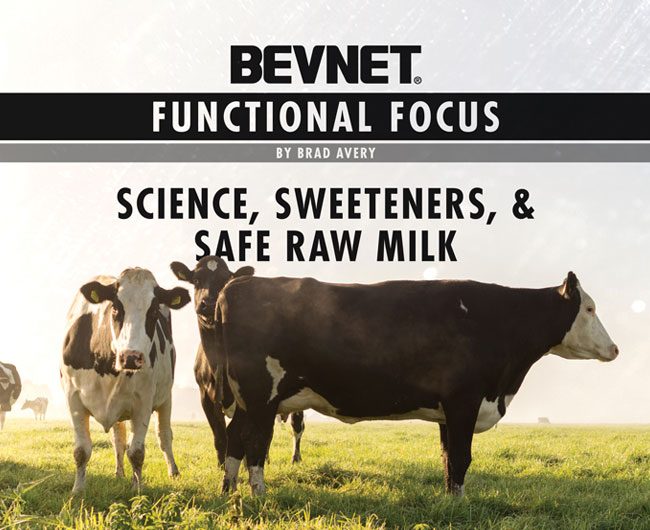 Consumer and health trends force some products to decline, and others to ascend. But in the face of these trends, new innovations in food science are still playing with long-accepted formulas, trying to keep markets open and expanding. Researchers and innovators in the lab working on functional ingredients and sweeteners keep finding ways to further disrupt and stretch outt established categories.

While the dairy industry has frequently touted its nutritional superiority to dairy alternatives, raw milk is an area of unrealized potential in the category. In sweeteners, sugar replacements have frequently struggled to prove themselves superior in flavor. But breakthroughs are made every day, and there’s a new set of ingredients with the potential to shape the future of beverage.

Last year, lawmakers in West Virginia celebrated legalizing the right to drink raw milk with glasses of the unpasteurized beverage, only to find themselves in national headlines after many of them suddenly fell violently ill. While some of those legislators would go on to claim their mysterious stomach virus was just a coincidence, the raw milk law passed against the urges of the U.S. Food and Drug Administration (FDA), which cites an unnecessarily high health risk with the beverage.

But people have long advocated drinking raw milk for its health benefits; for example, a study published in The Journal of Allergy and Clinical Immunology in 2011 found that European children who drank raw milk were significantly less likely to develop asthma, due to a lack of certain proteins that are destroyed in the pasteurization process. And that’s great, but when it comes to health problems, the choice between asthma and dysentery is a tough one.

But now, California-based Tamarack Biotics may have finally found a way to get the best of both worlds. Working with ultraviolet light technology developed by South African company SurePure, Tamarack Biotics has released TruActive, a powdered dairy ingredient which retains the immunity-boosting complement proteins from raw milk.

In March, TruActive received Generally Regarded as Safe approval from the FDA. According to Tamarack Biotics founder and CEO Bob Comstock, TruActive can reduce the risk of asthma in children. In older consumers, it not only boosts immunity but can also help improve the effectiveness of vaccines, making it valuable for the elderly for whom flu shots are less likely to work.

The proteins, Comstock said, are 20 to 50 times more effective for immunity than those found in pasteurized milk.

“You can’t get these immune-active proteins from soy, or pea, or broccoli or anything,” Comstock told BevNET. “They’re only created in mother’s milk. So throwing them into heat and damaging them is an overabundance of safety and caution that’s destroyed the potential benefits of a fantastic biofluid.”

While ultraviolet (UV) light treatment has long been an effective way to kill pathogens in water, until recently it could not do the same for milk due to its opaque color, Comstock said. But SurePure’s technology, which Tamarack has exclusive rights to use, makes milk flow around the outside of a UV lamp so the entire batch is sterilized while retaining the valuable proteins. The milk is then dried into a powder form at a low temperature; too much heat during the drying process could still destroy the protein.

Currently, most of the early customers for TruActive are sports drinks, Comstock said, as the proteins are also effective for recovery. One brand working on a health drink for elderly consumers has also purchased the ingredient.

Tamarack Biotics is also preparing a clinical trial in Europe comprised of 3,000 children to further test TruActive’s ability to prevent asthma, eczema, and food allergies. The trial will take five years to complete. 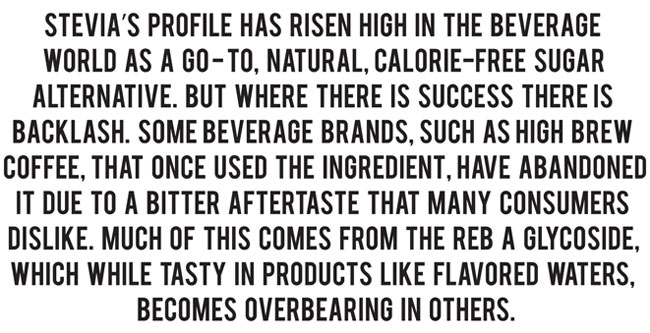 Stevia’s profile has risen high in the beverage world as a go-to, natural, calorie-free sugar alternative. But where there is success there is backlash. Some beverage brands, such as High Brew Coffee, that once used the ingredient, have abandoned it due to a bitter aftertaste that many consumers dislike. Much of this comes from the Reb A glycoside, which while tasty in products like flavored waters, becomes overbearing in others.

“As you start to use it at a higher rate and try to remove more and more calories and more and more sugar, you tend to bring out the more negative attributes of stevia, like the bitterness and lingering,” said Andy Ohmes, global product line manager for Cargill.

One of the latest attempts at solving the issue is Cargill’s EverSweet. In April, Swiss biotech company Evolva announced it had entered an agreement with Cargill to produce and commercialize the sweetener as it gears up for a 2018 launch.

To bring out the best in stevia flavoring, Cargill broke down the plant to its individual glycosides, of which more than 50 have been identified. After testing the glycosides individually, researchers found that the best tasting ones, Reb M and Reb D, came in too small a quantity to mass produce through extraction alone. That’s where the age old method of fermentation came in. Using a specially crafted baker’s yeast, Cargill produces the same molecules naturally produced in stevia but at a scaleable size fit for the market.

“When we look at some of the changes that are coming today with labelling laws, reduced sugar trends, taxation and things like that, there’s a big push to remove sugar but maintain sweetness and maintain great taste,” Ohmes said. “The opportunity is broad, it’s not just beverage. Everywhere from baked goods to confection are all feeling the pressure to come out with new choices for their customers using alternative sweeteners.”

While there is no set date for EverSweet’s release, other products that have been on the market for years working to mask stevia’s more off-putting qualities are starting to see their popularity pick up. That is the case with Corbion’s PURAC FIT Plus, in which the lactic acid works to improve the flavor of red fruit and cola while masking the lingering flavor of stevia with its own mild sourness.

“Sugar is not that easy to reduce,” said Ardie van Lankveld, global market manager sweet at Corbion. “It has much more than only the sweet taste to it, it has a mouthfeel. And when beverage started to work with stevia, they really had these off-notes. Now we are on, say, the fifth generation of stevia but still you have this off-note.”

PURAC FIT Plus, Lankveld said, captures the off-note flavor to improve sweetness and mouthfeel. The ingredient can also increase shelf stability in juices by as long as 30 days and can help stabilize coloring.

Ingredient company the Beneo Institute got a boost in April after a study confirmed their oligofructose, prebiotic fibers derived from chicory root, can lower a person’s blood glucose response when used as a partial sugar replacement in food and beverages. The study used a sample yogurt drink in which only 20 percent of sugar had been replaced with the oligofructose and found that participants had a 14 percent reduction in blood glucose.

While many consumers are aiming for zero sugar in their diets, it’s hard to underestimate the selling power of better-for-you beverages, and finding ways to manage the impact of already reduced amounts of sugar can go a long way toward building a brand’s health credentials.

According to Katrien Lambeens, the product manager for functional fibers at the Beneo Institute, oligofructose bears a strong similarity to sugar. It not only resembles it physically, but also boasts a high solubility and sweetness that allows companies to significantly cut sugar content without impacting on flavor or texture. In addition, oligofructose is only 2 kcal to sugar’s 4 kcal.

“If you replace sugar by 30 percent and replace it with oligofructose consumers actually cannot taste the difference,” Lambeens said, citing taste panels the company ran.

Oligofructose is only about 30 to 50 percent as sweet as sugar, which makes it unlikely for a full replacement option, but for the consumer with a blood sugar count to maintain it could provide a unique twist to a functional beverage.