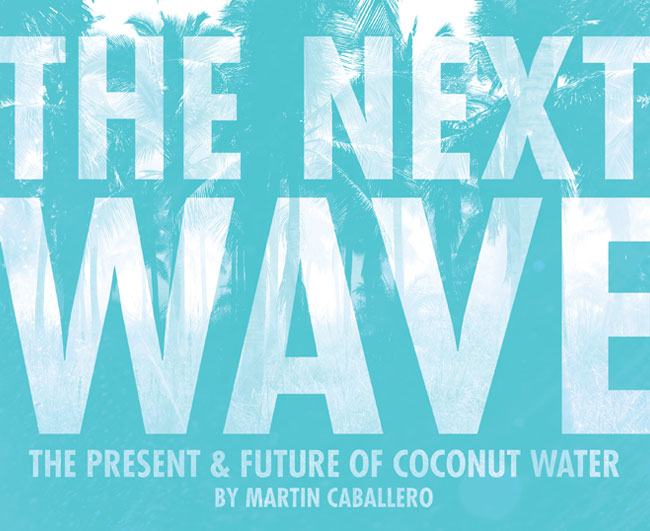 Affirmed as a viable category by the pickup of Zico and O.N.E. by Coke and Pepsi, respectively, coconut water has become a fixture of the modern beverage landscape, an industry generating over $2.7 billion in global sales and projected to double by 2020, according to a report from Zenith Global.

But after penetrating the mainstream, coconut water is facing a new challenge: how to stay relevant and innovative within the exploding plant-based waters category which they helped cultivate.

In discussions with BevNET, industry experts, market analysts and brands themselves shared their thoughts on the current state of the coconut water category, as well as its potential for further growth and retail penetration.

Taking the pulse of the coconut water market begins with an examination of the category’s sales performance. While still the dominant force in the alternative waters market – accounting for 96 percent of volume and 86 percent of value in 2016 – there are indications that coconut water may have reached a saturation point that some industry experts believe may inhibit its potential to match the massive gains of several years ago.

According to statistics provided by market research firm SPINS, both refrigerated and shelf-stable coconut waters have posted modest gains in combined channel sales; in a 52-week period ending on March 19, the former is up 12 percent and the latter by 7 percent.

“We are living in a post-coconut water world,” said Brent Coons, Director of Natural Industry Insights for SPINS. “Coconut water is still hugely significant, but I draw parallels to kombucha and what happened there; it has proliferated everywhere, it has mainstreamed. The product itself is more commonly known across all consumer types and retail channels and it has paved the way for other beverage types.”

However, within the natural channel, the spread of the product may have killed the novelty for the consumer. Refrigerated coconut water sales are down by 11.4 percent, while shelf-stable has dropped by 10.6 percent. The numbers in specialty gourmet channel tell a similar story: refrigerated sales have fallen 11 percent and shelf-stable by 9.9 percent.

“Beverage is often about new discovery, so folks have probably tried the products and now they are trying other things like maple water and probably trading back and forth in some cases,” Coons speculated.

Meanwhile, falling sales figures for coconut water blends made with coffee, juice and tea suggest a tepid response from consumers for these types of innovations. Combined channel sales for refrigerated coconut water and coffee blends dropped to $338,631, a 66 percent decrease from a year ago to date, when sales cracked the $1 million mark. Shelf-stable coconut water and coffee blend sales, valued at over $7 million last year, fell 37 percent to around $4.4 million. 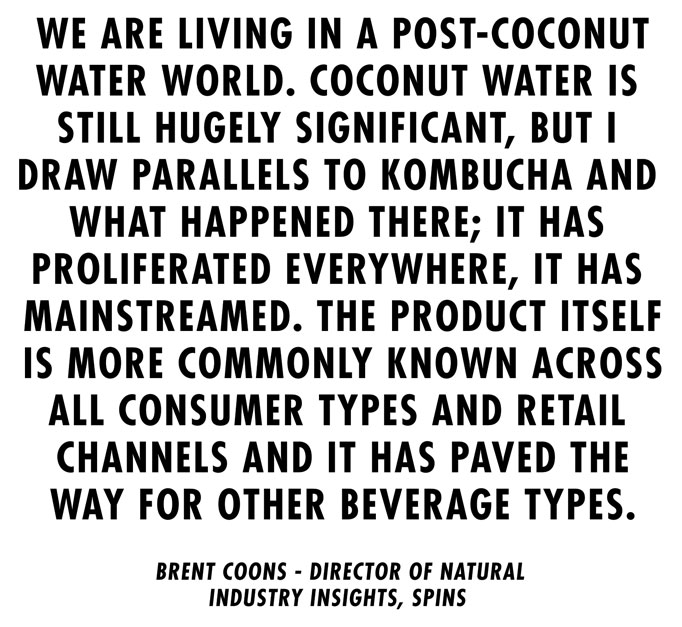 Outside of the pure product, coconut water blends made with juices represent the largest dollar share of products within the category. Combined channel sales for refrigerated coconut water and juice blends were down 14 percent, while shelf-stable blends, valued at roughly $60 million in the same period last year, were down 16 percent to around $50 million.

“Some of the other plant waters are maybe playing in that position a little bit with lower carb counts, lower sugar counts and sometimes lower calorie counts,” Coons said, suggesting that some consumers’ concerns about sugar content in juices could be carrying over onto juice and coconut water blends. “Since coconut water is a mainstream product, folks are trading from carbonated sodas to coconut waters, probably not a big deal. But thinking in terms of core natural consumers, that might be some of the reason why we’re seeing a sense of slowing down there.”

Similar to what’s happened within the kombucha and cold brew categories, Coons said a decentralization of the category, in which consumers are more attuned to the nuances and different characteristics of individual brands and regions, could spur further growth.

“You can go anywhere and get your mainstream coconut water, but natural and specialty consumers especially are starting to look for that differentiated product, which sometimes comes from the ingredients, organic certification, sourcing, backstory, maybe transparency around sourcing, the social side, the environmental side.” he said. “I think all of those could come into play more and have more of an opportunity for brands to continue to use those aspects to differentiate themselves.”

As the category has evolved, beverage manufacturers are increasingly exploring uses for coconut water as a base ingredient for other products. Sports drink brand BodyArmor, for example, is just one brand that sees coconut water as the main ingredient. Also, juice brands have been swapping in coconut water to cut calories and sugars.

“Anytime there’s a trending ingredient, there’s an opportunity to swap one out and put that trending one in,” said Coons. “I do think that there’s legs to that and we’re seeing that coconut in general, not just the water side, as an ingredient being brought into so many different food categories as well as a substitute ingredient.”

Even as sales have flattened somewhat, coconut water’s impact on the market can be felt in the rise of the plant-based water category as a whole. Both refrigerated and shelf-stable plant-based waters posted triple digit gains in combined channel sales, with the former up around 332 percent, pushing sales past the $4 million mark. “Tree waters and cactus waters have officially arrived,” Coons said. “I’d say let the distribution gains begin.”

While the coconut water market continues to evolve, the relative silence coming from investors observing the segment in the last few years has been conspicuous. Four years after Coca-Cola’s purchase of Zico, private investment activity has slowed significantly, leaving lingering questions as to what that means for the health of the category overall.

“We haven’t seen many new coconut water startups getting off the ground and raising funding over the past two years, but we are starting to see acquisitions of the larger brands as the segment matures,” said Zoe Leavitt, consumer technology analyst at CB Insights. While noting New Age Beverage’s acquisition of Maverick Brands, maker of Coco Libre, in April, Leavitt said that most of the major investment in the category came in 2013-2014, culminating in Reignwood Group’s $165 million investment in All Market in 2014, which represent an outsized portion of coconut water funding figures.

Zico founder Mark Rampolla’s insight into the private investment space echoes Leavitt’s. After driving the first wave of coconut water on the domestic market, culminating in Zico’s acquisition by Coca-Cola in 2013, Rampolla has since co-founded Powerplant Ventures, an investment firm that works with startups addressing social challenges in food, beverage and technology.

“I frankly don’t think so,” Rampolla responded when asked if coconut water was still an exciting space for investors. “I remember studying the energy drink market before launching Zico and finding out that something like 80 percent of the value in the category was captured by the two or three major brands. I think the same is true in coconut water.”

Like Rampolla, Ken Sadowsky was an early believer in the potential of coconut water, having invested in All Market, the New York-based makers of Vita Coco, in 2006. He is a Senior Beverage Analyst for Belgium-based investment holding company Verlinvest and still serves as a director at Vita Coco.

“I still see a very bright future [for coconut water],” he told BevNET in an interview. “I just look at the Vita Coco brand and see that our household penetration is at four perecent. That leaves 96 percent still open.”

Sadowsky’s optimism is in part fueled by the recent launch of Vita Coco’s first-ever national television ad campaign featuring model and lifestyle guru Chrissy Teigen, calling it “the beginning of something great.” He said he hoped other brands in the category would follow suit and help build awareness for coconut water with new and ambitious marketing efforts.

“There’s nobody else is advertising, basically,” he said. “We are the biggest, so I guess the expectations are that we will do it. But I think two things have to grow: one is coconut water household penetration, and it’s tough to have one company do that when it’s a category. So it would be great to have Coke with Zico or Pepsi with O.N.E., somebody sort of join in the choir of preaching how great the benefits of coconut water are.”

Rampolla, while noting a personal interest in coconut-water based probiotics and kefirs, also voiced his uncertainty that the proliferation of different coconut water SKUs and types – such as exotic flavors, carbonation, and functional ingredients – were indicative of a growing, healthy category.

“It could be too much money and too many brands chasing too many shiny new objectives,” he said. “To me, the health of a category should be measured by the creation of sustainable profits reasonably distributed across the entire supply chain, good jobs, improving efficiency, falling environmental impact and the health and wellness of the consumers it serves.”

Still, Rampolla voiced doubt that the drop-off in private investment in the category has had much of an effect on its development.

“Coconut water brands need capital to grow,” said Rampolla. “They are competing against thousands of other products for share of stomach and shelf and that takes money. It’s getting harder and harder to differentiate so brand must play a stronger role.”

Sadowsky noted that it was difficult to put himself in the place of an investor observing the coconut water space today, but pointed to over a decade of growth in the category as an indicator of its sustained strong performance.

“I guess you would have to look at other categories that are still growing and gaining momentum and say, logically, if someone is doing something right in a growth category, investors should be rewarded,” he said.

While the category continues to adjust to the new opportunities and challenges of its second phase of development, coconut water clearly still has plenty of runway left to grow.

“I’m waiting for someone to show me how to grow a producing coconut tree in my backyard,” he said. “That’s premium.”