When it comes to business panics, there’s no question some are more lurid and entertaining to watch than others. Wall Street panics must be counted among the most picturesque, what with bankers plunging out of skyscraper windows, their Brioni neckties streaming behind them as they hurtle down to their doom. The dotcom bust a decade and a half ago was pretty good, what with techies enduring an extended period (I’m thinking 20 minutes) of agonizing introspection, their office foosball tables suddenly idle, as they confronted their own fallibility. I wasn’t around for the tulip bust, but I can envision a lot of Dutchmen staring glumly down at their wooden shoes. Against those extraordinary scenes, our current sugar panic might seem oddly quaint and subdued.

But make no mistake, a panic it is, from everything I can see. All of a sudden, it seems, after decades of ignored warnings, many consumers seem to be in a desperate lurch away from added-sugar items – and those who market to them are lurching with them.

The existence of this panic hit home to me back in March, at Natural Products Expo West, where buyers clustered at booths were minutely examining packages and some marketers I chatted with seemed to be in a deep fright about how to deal with this new degree of scrutiny. One protein drink marketer who for years has been reminding me of how carefully he’s balanced his carbs and protein now is trying to slash another 50 calories out, never mind that finely tuned ratio. Other exhibitors in segments ranging from juice to soda were anxiously weighing taste/calorie tradeoffs. I picked up a pervasive sense that, where affluent consumers might once have been blinded by natural or organic ingredients to the fact that their preferred beverages still are laden with sugar, their eyes are open now. Employees of one well-known boutique soda doing demos at Whole Foods and Fairway are hearing dismissive “It has sugar!” comments from shoppers, reports the brand’s founder – the same consumers, he adds, “with their basket full of granola, blueberry yogurt and vanilla soymilk! And beer!” So he’s considering dialing up the on-package messaging that his brand contains less sugar than most sodas.

The situation seems more jarring to me because the panic is infecting not just overtly indulgent segments, like soda and lemonade and AriZona Iced Tea, but nominally nutritious entries like cold-pressed juices. In the past, I’d regarded these as somewhat insulated from consumers’ sugar concerns on grounds that they may be such nutritional powerhouses that shoppers would deem them to be a wise expenditure of their daily calorie “budget.” By that logic, a nutritionally trivial item like a canned Minute Maid juice drink, all apple juice and pear juice and other sugar, would seem to be in a different class than a kale bomb from Suja or Daily Greens. Apparently not, any more. 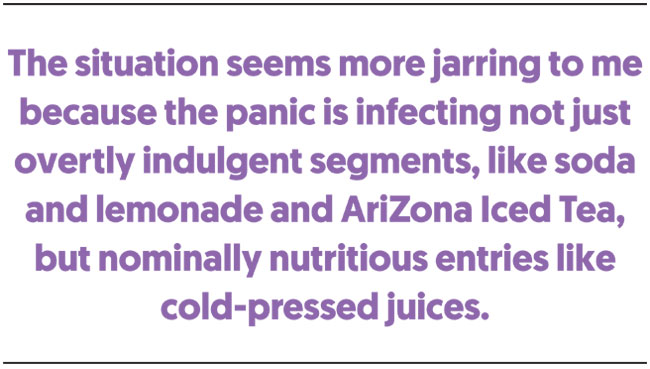 So where is this taking us? For starters, after being daunted by many misfires in the past, marketers are racing to bring out unsweetened beverages.

There are abundant signs that consumers’ palates are adjusting to less-sweetened options. Just as happened in beer with the advent of saisons and sour beers, on the non-alcoholic side some consumers are embracing kombuchas, shrubs and switchels, all basically drinking vinegars with a very different taste profile from soda. The boom in cold-brewed coffee is providing a compelling unsweetened option to many consumers seeking an energy lift, since cold-brew’s lack of bitterness reduces the need for sugar and dairy to offset the bitterness hit of conventionally prepared coffees. Sugar concerns may well prove to be at the root of the sudden pleateauing of sales of conventional energy drinks.

As I pointed out in a prior column, marketers from Hint Fizz essence water to Sound sparkling tea to lots of bottled water marketers are finding that by adding a dose of carbonation, they can offer users’ palates a small reward that can help offset the stimulation of the sugar that’s absent from the formulation, easing the transition to unsweetened beverages.

One potential solution that’s still not a key part of the mix is non-nutritive natural sweeteners like stevia. At one time the major CSD players figured that would bail them out of their declines, only to conclude that stevia is nowhere ready for prime time. That said, stevia technology seems to continually improve; Zevia has built a substantial business around stevia sodas that, to my palate, are far superior now from a few years ago (though like other soda marketers like Spindrift, it too has added sparkling water sublines to conform to consumers’ changing palates).

The stevia dilemma played out recently in a lawsuit between restaurateur and food writer Bruce Cost and the company he cofounded, Bruce Cost Ginger Ale, over the addition of a stevia-sweetened low-calorie entry it launched without the permission of its lately estranged partner. To Cost, who’s built his reputation as a chef, the taste tradeoff of stevia is unacceptable and BCGA blatantly violated his contract by putting out an “inferior” product under his name. He’d been willing to go so far as to offer a 66-calorie item sweetened with cane sugar and monk fruit but no further. Cost seemed pretty much in the clear on the merits, and the company backed off, but one can certainly understand its concerns too, and it recently switched the low-calorie sodas to a different brand name, Brooklyn Crafted. A similar scenario has been playing out at rival Reed’s Inc., where a new top-management team led by John Bello has been insisting that the company’s founder, Chris Reed, race some lower-calorie options to market for the Reed’s and Virgil’s soda lines. That said, many food observers argue that the solution is not to offer zero-calorie sweeteners but to wean Americans off their need to have everything sweetened in the first place.

It’s kind of ironic that this is happening at a time that the regulation-averse Trump administration is backing off Obama-era labeling regulations that would have required the disclosure of added sugar starting next year. Still, given consumers’ panic over sugar, that may prove a pyrrhic victory for marketers in the same way that the administration’s backing away from the Paris climate accord only stepped up efforts by cities and states to curtail carbon emissions on their own. And influential books like Gary Taubes’ The Case Against Sugar are ensuring that the issue stays at the center of the conversation, much as Michael Pollan’s writings elevated awareness of plant-based diets and organic cultivation.

This makes for a tricky moment for many in beverages, though it seems to me it ends up leaving most everyone in a better place, health-wise. But even beverage marketers working earnestly to offer more nutritionally rewarding options may have to endure some pain on the way there.