In the past six months, hard cider dollar sales have declined 6.1% in major national off-premise retailers tracked by market research firm Nielsen. Over the past nine months, the segment’s retail sales declined $11 million, to $491 million.

During Boston Beer’s third-quarter 2019 earnings call in October, CEO Dave Burwick said the company is not expecting a return to growth for Angry Orchard in 2020, although the company plans to launch new innovations and marketing campaigns. The orchard might be angry, but it’s quite patient.

“We don’t want to put too much pressure on that brand next year,” Burwick said. “To be honest, we have a lot of different pathways to growth next year. Angry Orchard doesn’t have to be one of them.”

MillerCoors acquired the Crispin brand in 2012 and launched Smith and Forge, another cider brand targeted to male drinkers in 2014. Smith and Forge volumes are down 53.2% year-to-date.

As for A-B’s Stella Artois Cidre, volume sales are down nearly 19%. One bright spot in A-B’s cider portfolio is Virtue Cider, a cidery in Fennville, Michigan that the world’s largest beer manufacturer acquired in 2017. Available in just 14 states, many of Virtue’s SKUs posted positive numbers, albeit off small bases. 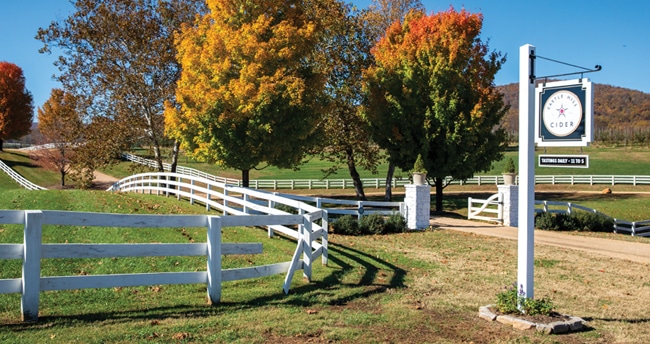 Although national trends for the largest cider producers are in the red, many smaller regional and local cider producers are growing. These producers’ sales data often are overshadowed in scan data due to the size of the category’s largest players. Angry Orchard’s volume trends dictate whether the overall category shows growth or contraction.

“Those brands are hurting,” U.S. Association of Cider Makers executive director Michelle McGrath told BevNet Magazine. “The success of the Angry Orchard Rosé had them growing temporarily, but the rosé trend has passed on from Angry Orchard to regional brands and we’re probably, I’m guessing, looking at a little wave, because a couple quarters ago national brands were up and that was due to not only Angry Orchard Rosé but Crispin Rosé.”

Nevertheless, McGrath said local and regional brands have grown considerably over the past seven years, increasing their volume share from 8% in 2012 to 34% this year.

Although national brands’ rosé styles suffered a sophomore slump, McGrath said the association’s local and regional members have found success with the style, which was up about 200% last quarter.

“It’ll be interesting to see if that sticks around for the regional brands,” she said.

“For every national larger, company-owned brand that’s down, there’s a corresponding regional or local cidery that’s up,” he said.

Due to large retailers such as Walmart and Kroger only doing shelf resets a few times throughout the year, it can take a while for smaller producers to gain the attention of category buyers, Jones added.

“It’s a little bit of a lag here for the market to respond to the whims of the retailers who are deciding what’s going to stay on the shelves and what’s not, and what it’s going to get replaced with,” he said. 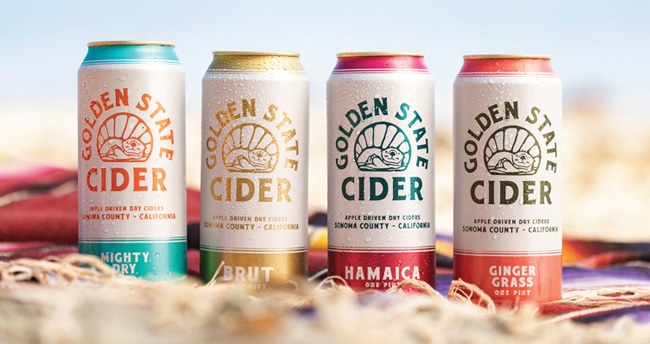 The NBWA publishes the Beer Purchasers’ Index, a monthly pulse check that asks buyers if they have ordered more of less of a particular category than they did the month before. The Beer Purchasers’ Index shows steady declines in cider purchasing from December 2018 until increasing in October 2019. Jones said this shows the seasonal ebb and flow in the category at the national level.

“We’re pretty much getting to the point where people are going to recognize hard ciders as a third and fourth quarter play,” he said.

Cider’s seasonality rings true for regional cider makers such as Castle Hill Cider in Keswick, Virginia, although those trends are “less pronounced” than a few years ago, cidermaker Stuart Madany said.

“Q3 is when some people who don’t think about cider the rest of the year [start to] think about it,” he said. “But at the same time I think awareness for cider — regional cider — is just on the rise.”

The Castle Hill brand sits firmly in what Madany called the “orchard-driven” segment of the market, welcoming guests to its orchard and tasting room on an 18th-century estate near Charlottesville, Virginia. Castle Hill sells about 3,000 cases annually, offering ciders mostly in the 6-8% alcohol by volume range in 750 mL bottles, as well as ports at 18% ABV in 500 mL bottles, Madany said.

This bifurcation of brands fills a need Jones sees in the U.S. cider market, which is far smaller than its counterpart in the United Kingdom. According to Jones, there are more ciders across a wider price spectrum. Here, “it’s all about the high end,” he said.

“You can’t just have everyone driving around in Mercedes-Benzes and Porsches,” Jones added. “Some people have got to drive the Ford Focus.” 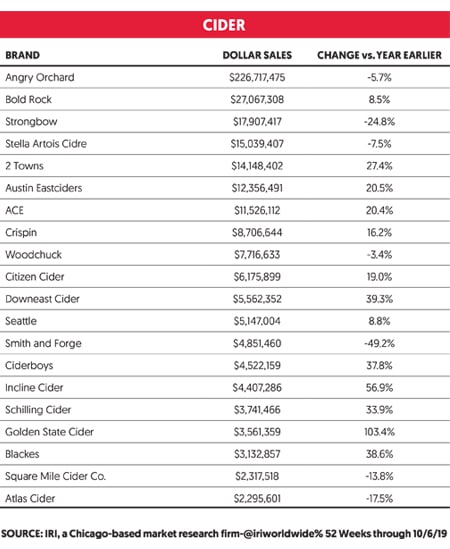 Golden State splits its offerings into different product lines under the same brand. Core ciders, which are available year-round, range from 5.8-6.9% ABV and come in a variety of packages that promote trial. The cidery’s Harvest Series and California Farm series are only available for a limited time after the harvest and come in fewer packages varieties.

“Especially with cider, there’s so much of an education element that’s missing and that we spend a lot of our time focusing on,” Lacey said. “The 19.2 [oz. can] offers a great entry point for people into the category.”

To educate consumers on the category, Golden State’s head cider maker Tim Godfrey has worked closely with the U.S. Association of Cider Makers on the Certified Cider Professional Program, Lacey said. Godfrey was among the first in the country to achieve the status of Certified Pommelier, the CCP program’s second level, which the association introduced earlier this year.

On the East Coast, the Castle Hill staff uses Virginia Cider Week — during the third week of each November — to promote the cider category.

“Virginia Cider Week is a big deal and we get out more and do more tastings and talks and dinners,” Madany said.

Continuing these consumer education efforts will be key to cider’s long-term success for the often misunderstood category, McGrath added. At retail, hard cider is often placed with or near beer, even though it’s more closely related to wine. Consumers often believe cider to be sweet and sugary, when many offerings run the gamut from dry to semi-sweet to sweet. Part of the solution, she said, is the Certified Cider Professional program, the first level of which aims to educate employees who are new to the cider industry.

“It’s really designed to help those folks get up to speed so that when they are talking to customers about cider they can do it from an educated platform,” McGrath said. “Hopefully, that will create a spark of enthusiasm in the conversation and allow the consumer to connect more with the beverage that they’re about to enjoy.”