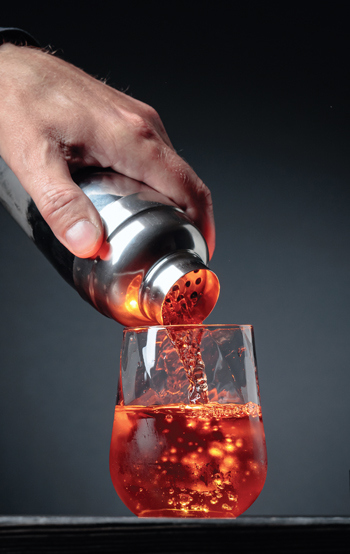 If, during the pandemic you’ve found yourself longing for the atmosphere of a cocktail lounge and the taste of a professionally prepared adult drink, you’re far from the only one. As consumers steered clear of bars and restaurants (despite limited openings around the country), sales of mixers and spirits grew as people shook up their drinking routines by making their favorite cocktails from the comfort and safety of their homes.

Retail tracking data show that both halves of the mixed drink — the spirit and the mixer — were in high demand in the past year. Mixers grew 35.4% to $404.9 million in MULO during the 52-week period ending January 14, according to market research firm SPINS. The category’s rise accompanied a 19.9% spike in distilled spirits, to $7.1 billion.

Jordan Silbert, founder and CEO of premium mixer brand Q Drinks, said that he believed the pandemic accelerated growth trends in the mixer category that had already been occurring. According to the brand’s internal data, Q was up 73% in MULO for 52-weeks as of January, while international competitor Fever Tree grew 53% and stalwart legacy brand Canada Dry improved 18%. In the four-week period between December and January, Q grew 54%, while Fever Tree was up 38% and Canada Dry fell 7%.

With the pandemic propelling sales, the challenge now is how to maintain the momentum as the world anticipates a broad reopening later this year. Silbert said that although Q far exceeded past years’ velocity growth in 2020, the brand “had the same amount of placements on March 12 that we did on November 12 and December 12.” The company is now focused on leveraging its strong performance to expand distribution, beginning with a six SKU rollout into Publix this month. As retailers resume resets, Silbert also hopes to expand Q’s shelf space within its existing partners — like Stop and Shop and Shaws, to increase in-store placements. He also noted that the brand was the highest driver of incremental dollars among mixers in Kroger last year, despite having only “14 inches of space on the bottom shelf.”

“What these last four weeks show you is that the trend is continuing,” Silbert said. “There is this move towards cocktails that are easy to make, there’s a move towards premium in general, but particularly around spirits and premium mixers. So all of that, again, was happening before. And it was moving [at a pace] we thought was quickly, but now COVID has been a real accelerator.”

Although there will be a day when people can once again enjoy the luxury of drinking on-premise, some entrepreneurs in the mixer category believe the gains made this past year will be permanent as consumers embrace their newfound knowledge of at-home mixology.

The growth has extended beyond just crack-and-pour mixers, but also includes more complex ingredients like bitters and syrup, notes Jomaree Pinkard, co-founder and CEO of Hella Cocktail Co. While many consumers may prefer a simple just-add-booze approach to their at-home drinks, others have gotten deeply involved in the craft of cocktail making that could be reshaping the category. The result, Pinkard said, is a “Pandora’s box” of amateur mixologists who now own the home bar materials and have the knowledge and passion to continue making drinks.

“Now it’s about building your cocktail or building your mocktail, and knowing what are the ingredients that go into it,” Pinkard said. “And that covers everyone from whether you’re an enthusiast, who wants to know every single nook and cranny and uses Mexican Chocolate bitters as a base, or someone who’s like, I just wanna make something that’s good and that reminds me of the bar. Anywhere along the journey involves being more and more educated and interested in the process.”

Like many CPG brands, COVID brought a new view on omnichannel retailing to Hella: the company’s online sales grew 400% last year, Pinkard said, while retail sales grew around 50% — though he noted Hella is working from a smaller, seven-figure baseline. While the company plans to continue to go deeper into e-commerce, much like Q Drinks, Hella also hopes to be able to turn the year’s momentum into expanded retail distribution. But Pinkard acknowledged that the category, and in particular smaller brands, still faces an uphill battle in traditional retail.

Part of that is because of the reset schedule: Currently, most retailers will only do mixer category reviews sparingly, sometimes only once every two or three years, Pinkard said. That limited shelf space means that even as their velocities spike, brands like Hella must still compete for limited space against the bigger Canada Drys and Fever Trees of the space. And with tighter competition, Pinkard said he fears slotting fees could increase.

“For retail, we will continue to try to access those points of distribution, but now as the mixer shelf has its heyday, it’s going to be like ‘well, everyone’s up 40%, so why would I substitute for you?’” Pinkard said. “And so it’s going to be a hard battle for different reasons, right? Because everyone’s up. And you’ve got to be able to prove that you can beat that number.”

Co-founder Brian May, a veteran of the alcohol space who previously served as VP of international business at Founders Brewing Co., said the startup raised seed capital in 2019 but found its rollout halted by the pandemic. Fullbar is currently available in about 300 stores in Michigan, Colorado and Texas, but had to pull back a Florida launch. The brand is now raising additional capital ahead of a relaunch this year.

When COVID hit last March, May said Fullbar struggled as consumer pantry-loading generally benefited well-known brands. Similar to Pinkard’s concerns, he’s worried that the newfound interest his brands are finding online will erode as bigger companies make it more difficult for new products to gain placement. The brand’s mixers in particular have faced the biggest headwinds, both from competition and thinner margins. But May also believes Fullbar’s customizability and convenience will benefit it as group gatherings return.

“Every time there’s a recession or some kind of a pullback there’s always new habits that form and everybody’s trying to figure that out right now,” May said. “But I think our brand proposition is still there. Events like tailgate season, all those group occasions where there’s a lot of people together that want to eat different things and try different things, that’s really where we need to be. And, you know, that’s where we’re going to try to go.”