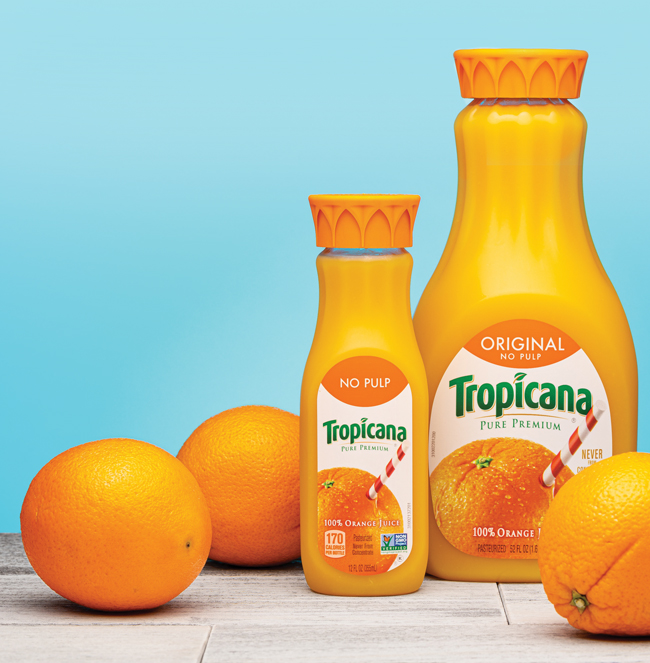 With major brands in transition, challenges and opportunities abound

In the later 1950s, residents of New York City looking out at the city’s ports could often find the familiar sight of the S.S. Tropicana, an 413-foot, 8,000-ton steamship that made a weekly trip up the Atlantic coast from its loading point in Port Canaveral, Florida filled with precious cargo: stainless steel tanks holding a total of 1.5 million gallons of fresh-squeezed orange juice. Until water transport was eventually scrapped for rail shipping in 1962, partly in an effort to reach the burgeoning Midwest market, Tropicana’s flagship steamer served as a life-sized representation of both Americans’ insatiable thirst for the citrus juice and of the engineering and logistical feats required by the fruit company to fill that demand.

Fast forward to 2021 and that ship metaphor takes on a wholly different meaning. Despite reporting sales growth in 2020, Tropicana had been resembling a rusty, dated cruiser for much of the past decade, as a variety of practical challenges, from distribution issues to encroaching competition from non-juice brands, combined with the anti-sugar movement to create a perfect storm of disruption for the category. The Florida-based company isn’t the only one feeling the squeeze: over the last 12 months, two other legacy brands — PepsiCo’s Naked and Coca-Cola’s Odwalla — have been either sold or divested completely, while Suja, once considered an integral piece of Coke’s strategy to pivot away from soda and into more natural categories, was acquired by private equity firm Paine Schwartz Partners in July. Though names like Bolthouse Farms (itself sliced off from Campbells back to private equity a few years ago) and Evolution Fresh still remain, many of the of the breakthrough category brands from the past decade — Daily Greens, BluePrint, Juice Served Here — are either gone or barely pulsing.

Yet if Tropicana and the like have been decommissioned, a new generation of juice brands are charting their own course through the market with considerably more nimble vehicles. Rather than simply chasing the cooler space left behind from the departure of heavyweight category names, this group is seeking to redevelop the juice space from a different perspective by leaning into functional ingredients and use-specific products, embracing innovative packaging formats and by making it easier for their target demographic to get their hands on products, regardless of where they live or how they shop. The end of the “big juice” era marks the beginning of a new chapter for the category — but where the story goes is still far from certain.

Not long ago, juice was seen as a healthier alternative to soda, and as a way for U.S. beverage giants to diversify their portfolios with a natural, health-focused product that could offset declining soft drink sales; there’s a reason why Pepsi named its since-shuttered emerging brands division after Naked.

Compared to that, things in 2021 are pretty much upside down: not only are sodas as popular as ever, but the big bets that conglomerates like Pepsi, Coca-Cola, Hain Celestial and The Campbell Soup Company made on juice have all failed to pan out (the exception being Starbucks, which owns premium cold-pressed brand Evolution Fresh). Even as technology has helped improve product quality and shelf-life, the deck remains stacked with logistical problems and extra costs, not to mention long-term declines in consumer demand.

Many of those issues have been an ongoing challenge for juice makers, but this year, corporations determined that they simply weren’t worth the trouble anymore. Divestment and a culling of bulging brand portfolios has been a consistent theme across the major industry players over the past year, which has seen Nestle Waters offload its U.S. water business and Coca-Cola put long-standing brands like Tab and Zico out to pasture. But the biggest moves have come in juice — first with Coke’s closing of Odwalla in July 2020, and followed this year by the exits for Suja, Tropicana and Naked. The motivation, according to Euromonitor’s Howard Telford, is to keep the focus on a smaller group of high-performing categories — water, energy drinks, coffee and carbonated drinks, mainly — rather than continuing to work in a challenged segment.

“In part, the news of Tropicana and Naked reflects the uncertain role of fruit juice in the consumer’s routine long term and the ongoing concern about sugar, particularly in North America where Tropicana is largest,” wrote Telford in August. “While the category in the US enjoyed a boost in off-trade sales in 2020, with consumers seeking more vitamin C for immune support, the long-term trend has been one of decline. The role of fruit juice in future consumers’ diets will look significantly different in terms of portion size, functional need and packaged versus unpackaged formats.”

For Pepsi, having two of its flagship brands stalled at mid-single-digit dollar share of a fragmented, low-growth category no longer made sense, despite those brands bringing in $3 billion in revenue in 2020. While consumer interest in products with immunity boosting ingredients helped the brands grow around 9% in 2020, years of declining sales prior suggested that the reversal could be temporary.

Meanwhile, the fluctuating nature of commodities (like orange juice futures, for example) makes margins on juice-based beverages inconsistent, at best; according to Credite Suisse, Pepsi’s juice EBITDA margins (12%-13%) in 2020 lagged behind its overall numbers (18.6%). Analysts at Goldman Sachs noted that the deal puts Pepsi “one step closer” to achieving its goal of approximately 15% margins in its North America business, with proceeds from the sale going to fund growth for hot brands like Mountain Dew, Rockstar, Gatorade and bubbly. It also means unloading some hard assets in the form of Tropicana’s sprawling 285-acre manufacturing base in Bradenton, Florida, which processed around 4 billion oranges annually as of 2019.

Yet the deal would likely not have been possible without some additional incentive for Pepsi, which arrives in the form of the joint venture. Under the terms of its agreement with PAI Partners, Pepsi will retain a 39% non-controlling interest and control exclusive U.S. distribution rights to the portfolio for small-format stores and foodservice via its refrigerated DSD network. That architecture will allow the soda giant to hand off product innovation and scaling to PAI, while it focuses on serving customers in “arguably the most attractive segment of the portfolio” because of its relatively high margin, according to Goldman Sachs analysts.

“This joint venture with PAI enables us to realize significant upfront value, whilst providing the focus and resources necessary to drive additional long-term growth for these beloved brands,” said PepsiCo Chairman and CEO Ramon Laguarta in a press release.

But the recent moves are mainly about unloading an expensive, complex business in favor of focusing on simpler and stronger ones: as Laguarta mentioned at the time, the deal “will free us” to concentrate on growth categories like zero-calorie drinks, healthy snacks and better-for-the-planet products, like SodaStream. At the time of the Pepsi transaction, Credit Suisse analysts voiced support for the deal, noting that its structure “removes legacy brands at a fair price while also providing future optionality in a large category.” Goldman Sachs agreed in their coverage, noting that the proceeds from the sale “will strengthen the company’s balance sheet and enable PEP to make organic investments that will likely support further margin expansion over time.” Though the deals have yet to close, Pepsi’s current trajectory appears to be positive: the company reported a 20.5% increase in net revenue during Q2 2021, with Pepsi Beverages North America (PBNA) and Frito-Lay North America turning over $809 million and $1.3 billion in operating profit, respectively.

The calculus for Suja was slightly different. At the beginning of the decade, the California-based brand seemingly ticked all the boxes as the next billion-dollar brand: controlling production from its own 20,000 sq. ft. facility, Suja quickly became one the country’s fastest growing beverage companies, picking up backing from celebrity investors and PE firms along the way. By 2017, Coca-Cola had a 33% stake in the company (over $90 million invested), with an option to purchase it outright in 2020. The brand’s success with juice brought it into adjacent categories, like kombucha and shots, and after a sales dip last summer, Suja was recovering well under the leadership of CEO Bob De Borde.

Yet there was one glaring issue: the brand’s wide reach was dependent on its place aboard Coke’s network of refrigerated delivery trucks. According to Suja co-founder James Brennan, by shutting down Odwalla and its accompanying chilled DSD platform in July 2020, the soda giant effectively ended its relationship with the juice brand. The company subsequently bought out Coke’s stake and began shopping the brand, eventually agreeing to sell to PAI this July. The soda giant’s strategic shift away from chilled distribution also helped set in motion a similar process at Health-Ade Kombucha in August: Coke sold its stake in the brand, which was ultimately acquired by FBG.

Could there have been a different outcome for these brands? Perhaps. As seen with kombucha, cold brew and coffee creamers, developing shelf-stable versions of refrigerated products is one way to escape the restrictions of the cold box and expand the audience for a product; see sparkling juice brands like Izze and Hubble, or fruit-derived drinks like coconut water. Whether in the cooler or the ambient shelf, the competition has also changed — juice brands aren’t only jockeying with each other, but also a new generation of hybrid products: think plant-based platform brand Koia, juice-hydration beverage Lemon Perfect, or the range of high-pressure processed coconut-based drinks and smoothies from Harmless Harvest and Genius Juice.

For retailers, the COVID pandemic helped spark broad demand for refrigerated orange juice in particular, but the role that different channels are playing in growing the category is changing. Speaking on a BevNET panel in March, Jeff Crumpton, Retail Reporting Solutions Manager at SPINS, noted that smaller regional grocers are becoming centers of innovation for juice, and in some cases are growing at 2x compared to chain and big box stores.

But brands are adapting in different ways. For fresh-pressed juice bars, the approach has been to find consumers where they live by simplifying their offerings: in the case of Pressed Juicery, it’s by refreshing its packaging and branding, or by expanding coverage by partnering with rapid-delivery platform goPuff, as with Pure Green. Elsewhere, brands like Uncle Matt’s Organic, which also recently underwent a rebrand, are using momentum from consumer interest in immunity drinks to push further into the segment, most recently with the launch of a line of “Ultimate Shots” with functional benefits. Juice shots, as readers likely know, have been a bright spot for the category in recent years, with names like KOR, Vive Organic and So Good So You all expanding distribution this past year.

Yet as younger brands push the envelope with innovation, the old fleet will be looking towards their new private equity owners to guide them towards the horizon. Even Odwalla may see a new life, its rights acquired by investment firm Full Sail IP Partners in mid-September. Much remains uncertain, but you can’t count on one thing: the old map doesn’t work anymore.