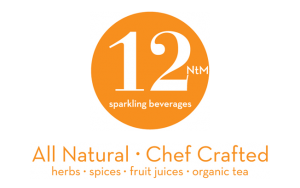 New York, NY (July 14, 2011) – 12NtM Sparkling Beverages, the all natural chef-crafted blends of herbs, spices, fruit juices and organic teas, has announced a partnership with superstar chef David Burke. The pairing underscores the drink’s growing popularity as an accompaniment to great food – as well as an all-natural refresher by itself. The new association comes as Twelve Beverage, LLC adds 8-ounce single-serve frosted bottles to its Blanc and Rouge flavors, also available in 750 ml bottles. The new size will make the beverages more portable and will promote greater trial.

Burke, one of the pioneers in American cooking, is founder of David Burke Townhouse in Manhattan, and seven other restaurants, including the new David Burke Kitchen at The James New York hotel in SoHo. Burke will serve as spokesperson, chief cheerleader and lead tastemaker for 12NtM (stands for Noon to Midnight), which, he says, “brings out the very best in whatever you’re serving, and is so much more appropriate than a diet soda or iced tea.” Burke will serve 12NtM at his restaurants, as well as advocate for it in other fine restaurants and for use at home.

Burke, noted for his imaginative use of fresh, local ingredients and for his highly developed sense of whimsy, explained that, “I developed the original recipe for the Rouge flavor, so I’ll be speaking from my heart as well as my head.” Upcoming, Burke will create and host special events for consumers and retailers, and make available recipes for some of his signature dishes.

12NtM’s growing popularity is reflected in its expanding distribution at retailers including Whole Foods, Kings, Baducci’s, Wegmans, D’Agostino, Zabar’s, and Fresh Market, and online at www.twelvebeverage.com.

12NtM president, Steve Diforio said, “adding David Burke to our team gives us greater visibility and underscores our ‘chef crafted’ positioning. We are looking forward to a long and successful collaboration with David, as we build a great brand.”

12NtM sparkling beverages are crisp and refreshing. There is no added sugar; the flavors are lightly sweetened with natural fruit juices, and contain only 60 calories per 8-ounce serving. Rouge tastes of pomegranate and black currant. Blanc has a citrus-ginger flavor. Both the 8-ounce and 750ml sizes are packaged in modern, frosted