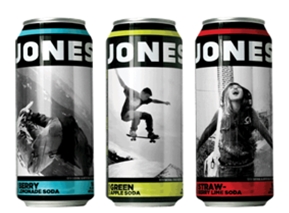 “We just unveiled the new tall cans at the National Association of Convenience Stores Show this past weekend, and the response was excellent,” said Bill Meissner, CEO of Jones. “This is an important segue for Jones, as the convenience store channel allows us to reach more consumers in general, and to reach more people who will try the product and ultimately convert to grocery store purchases. This will make both channels an even stronger sales opportunity for Jones.”

The new tall can offering is attractive for retailers as it gives them a premium soda offering in a package that’s more appropriate for their shelving, while for consumers, it gives them more access to the Jones flavors they love. The 16-ounce offerings will be available in Jones’ most popular Pure Cane Soda flavors — Green Apple, Berry Lemonade and Strawberry Lime. These three flavors boast the highest sell-through rate among single glass bottles according to AC Nielsen syndicated data, which for the 13 weeks ending Sept. 3, showed these three SKUs were up 26% versus one year ago.

“While Jones has previously ventured into the can category, this is the first time we’ve launched not only a 16 oz. can, but most importantly, a can with packaging that sticks to the characteristics of the Jones brand of mixing bold black and white photos with bright color accents — this is what stands out to consumers,” continued Meissner.

The new can format is expected to facilitate distribution penetration to the convenience store channel through Jones’ product distribution footprint. The company’s distribution footprint has increased 25% during the first half of the year in terms of covered counties nationwide. This will give the brand access to markets coast-to-coast for both its core 12 oz. glass, and now, the new 16 oz. canned sodas.

Jones Pure Cane Soda cans will be available for convenience store shelves by late October, and will retail for $1.29 MSRP. For more information, visit www.jonessoda.com.

About Jones Soda Co.
Headquartered in Seattle, Washington, Jones Soda Co. (NASDAQ: JSDA) markets and distributes premium beverages under the Jones Soda, Jones Pure Cane Soda and WhoopAss Energy Drink brands and sells through its distribution network in markets primarily across North America. A leader in the premium soda category, Jones is known for its variety of flavors and innovative labeling technique that incorporates always-changing photos sent in from its consumers. Jones Soda is sold through traditional beverage retailers. www.jonessoda.com