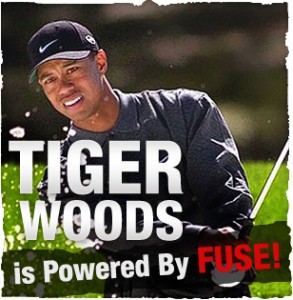 One of the world’s most recognizable athletes, Tiger Woods is now “Powered by Fuse.”

“When I learned about Fuse Science’s groundbreaking technology, I immediately understood that this will be a game-changer in how we live our lives every day, said Woods. “We will improve energy, nutrition and medication delivery in several global categories and we will enhance every athlete’s ability to perform at their natural best. This company is laying the foundation for some very significant things and after personally talking to them; I wanted to be Powered by Fuse.”

“This is a very big day for our company and what it means to be Powered by Fuse,” added Brian Tuffin, President and Chief Operating Officer. “Our partnership with the world’s best is an enabler to have a worldwide impact sooner than later. Tiger recognizes the significance of the journey we’re on as a company, and wants to be part of our growth while leverage the technology to make a difference globally.”

“Beyond sports, this technology applies in so many ways,” added Tiger. “The long-term potential is significant. To me, that’s something much bigger than golf.”

Woods will represent the Fuse Science technology, intellectual property, unique delivery system, and future products to be developed in the sports nutrition and energy categories.

“In some countries, millions of children grow up in a nutritional void,” Tuffin said. “With Fuse Science technology, we can create new, incredible nutritional opportunities, enhance access to medicines, and improve the quality of life for millions everywhere around the world including right here in the US.”

Fuse Science technology can be used to more effectively deliver vitamins and minerals in a variety of unique applications that can address nutritional deficiencies in thousands of impoverished communities across the globe – creating opportunities for malnourished children, in particular, to lead healthier, more productive lives.

“With 14 major championships in just 15 years as a professional, 71 PGA Tour victories, and PGA Player of the Year honors a record ten times, Tiger Woods’achievements easily rank him among the most prolific and successful athletes of all time,” Said Adam Adler, Fuse Science CEO. “He was the youngest player ever to achieve golf’s career Grand Slam, and remains among the most recognized athletes in the world.”

Tuffin concluded by saying, “Now knowing Tiger Woods on a more personal level there is no question as to how he became the best in the world. There is not an ounce of doubt that there is much more excellence to come, and we’re glad being Powered by Fuse can be a part of it!”

Double Eagle Holdings (OTCQB: DROP) is the parent company of Fuse Science, Inc., an innovative consumer products holding company based in Aventura, Florida. The corporate name, Double Eagle Holdings is in the process of being changed to Fuse Science Inc. Fuse Science is the developer of new, patent-pending technologies poised to redefine how consumers receive energy, medicines, vitamins and minerals. The company has successfully developed and maintains the rights to sublingual and transdermal delivery systems for bioactive agents that can now, for the first time, effectively encapsulate and charge many varying molecules in order to produce complete product formulations which can bypass the gastrointestinal tract and enter the blood stream directly – all in a concentrated “DROP” form that is simply applied under the tongue. The Fuse Science technology is designed to accelerate conveyance of medicines or nutrients relative to traditional pills and liquids and can enhance how consumers receive these products.

Information about Fuse Science is available online at www.fusescience.com or by calling 305-503-FUSE (3873).