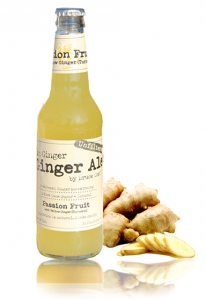 NEW YORK, March 2012 — Bruce Cost Ginger Ale adds Passion Fruit to its line of unfiltered ginger ales. This new flavor blends the tropical tang of fresh passion fruit with Bruce Cost Original Ginger Ale. A touch of turmeric, called “yellow ginger” by the Chinese and prized for its medicinal properties, brightens the yellow of this drink. Bruce Cost Ginger Ale Passion Fruit is a tangy, aromatic and gingery delight. Find it at specialty retailers throughout the US starting this spring.

When chef and Asian food authority Bruce Cost launched Bruce Cost Ginger Ale in 2010, it could be found in only a handful of markets and restaurants in New York. Today, it is available from specialty and food service retailers throughout the country including Whole Foods in New York and the San Francisco Bay Area, BevMo in California and Arizona, and Caribou Coffee in the Midwest and South. Top chefs such as David Chang (Momofuku), Rick Bayless (Frontera Grill), Thomas Keller (Ad Hoc), Charles Phan (Slanted Door) and Nancy Silverton (Short Order) are selling the ginger ale. And it canbe ordered online at http://harney.com and http://www.bevmo.com.

Bruce Cost Ginger Ale is deliciously spicy and may be enjoyed alone or as a mixer. Chill the bottle until ice cold, give it a gentle shake, and serve straight up. It comes in four flavors:

New! Passion Fruit — A delightful blend of fresh ginger and cane sugar with passion fruit, which is high in Vitamin C, Vitamin A, Iron, and Potassium, and yellow ginger (turmeric) which is a natural anti-inflammatory agent.

Original — A refreshing, spicy beverage made with nothing but fresh ginger (no extracts or oils) and pure cane sugar. Unfiltered and rich with ginger particles, it provides iron and a little vitamin C.

Pomegranate with Hibiscus — A delicious blend of fresh ginger and cane sugar rendered a natural ruby red with the addition of two popular antioxidants. This brew offers a less spicy twist on the Original with subtle lemon and floral dimensions.

Jasmine Tea — An unusual ginger ale infused with a fine, whole-leaf green jasmine tea from Taiwan. Redolent of jasmine flowers and earthy with tannins, this soft drink improves with age.

For more information, retailers, and recipes, go to http://www.brucecostgingerale.com.

In 1984, Bruce Cost wrote Ginger East to West, a small, award-winning cookbook that traces the history of ginger from its origins through its journey around the world. In 1989, Mr. Cost introduced his own herbal ginger ale to patrons of his San Francisco restaurant, Monsoon. A version without the herbs eventually became a staple of his other California establishments, Ginger Island in Berkeley and Ginger Club in Palo Alto.

In 1995, Mr. Cost brought his recipe for fresh ginger ale to Chicago, where he opened Big Bowl and Wow Bao restaurants with Lettuce Entertain You Enterprises. Handmade on the premises of eleven dining establishments, it became a signature item that has outperformed all other soft drinks with an estimated three million sales. After twenty years, he is producing bottled Bruce Cost Ginger Ale in partnership with TMI Trading Corp. in Brooklyn.