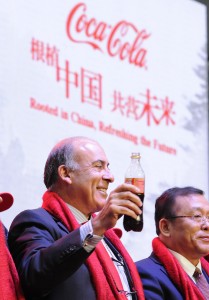 YINGKOU, LIAONING, CHINA–(BUSINESS WIRE)–Muhtar Kent, Chairman and CEO of The Coca-Cola Company, today inaugurated the opening of Coca-Cola China’s 42nd bottling plant located in Yingkou, Liaoning, the largest Coca-Cola production facility in China. Spanning an area of more than 170,000 square meters (42 acres), the plant represents a US$160 million (RMB 1 billion) investment in China and is part of a three-year, US $4 billion investment plan announced last year that underscores the Coca-Cola system’s confidence in China and its fast-growing beverage market.

Upon completion, this third bottling plant in Liaoning, operated by Coca-Cola Liaoning (Central) Beverages Co. Ltd., is expected to reach an annual production capacity of more than 5 billion servings of sparkling and still beverages, including Coca-Cola, Sprite, Minute Maid and Ice Dew. Coca-Cola plans to invest in nine production lines at the new facility, with four currently in operation.

The plant will directly create 500 jobs and generate an additional 5,000 job opportunities in the supporting industries. Together with two other existing plants in Shenyang and Dalian, this new investment will allow Coca-Cola to provide better services and refreshing products that quench the thirst of 44 million consumers in Liaoning Province and enhance its contribution to local development.

“This US$160 million commitment to Yingkou is more than an investment in Coca-Cola’s expansion to capitalize on the fast-growing China market. It is also an important step by Coca-Cola to assist in the development of local communities throughout China,” said Muhtar Kent at the opening ceremony. The ceremony was attended by Mr. Xue Heng, the Vice Governor of Liaoning province, Martin Jansen, CEO of Coca-Cola Bottling Investments Group China, David G. Brooks, President of Coca-Cola China and senior officials of Liaoning and The Coca-Cola Company.

On March 28, the day before the opening ceremony, Kent also met with Liaoning Party Secretary Wang Min and other key officials to discuss investment opportunities for the future in the province.

“China is a vast growth market for Coca-Cola. As we work to double the size of our global business in this decade, China will play a critical role,” said Mr. Kent.

“This new Coca-Cola plant is a welcome addition to our local economy as it will create new job opportunities for local workers and introduce new technology to foster industrial development and modernization for Liaoning province,” said Xue Heng, the Vice Governor of Liaoning Province. “We look forward to working with Coca-Cola to help make this project a success.”

China is one of the fastest-growing markets for The Coca-Cola Company, with volume expanding by 13% in 2011, maintaining double-digit growth in nine of the last 10 years. Consumption of Coca-Cola products in China now represents approximately 8% of the company’s global volume. Coca-Cola reported strong volume growth across its entire sparkling portfolio in 2011 with Coca-Cola, Sprite and Fanta each posting double-digit growth for both the fourth quarter and the full year. This growth is driven by a renewed focus on core brands, continued distribution gains and the expansion of cooler facings in China. Coca-Cola’s still beverage portfolio in China also continued to report rapid growth with Minute Maid, the world’s No. 1 juice brand by volume, achieving double digit growth in 2011.

The Coca-Cola China system now employs more than 50,000 people directly and creates 500,000 job opportunities in the supporting industries. Coca-Cola announced last year that starting in 2012 it and its Chinese bottling partners will make a US$4 billion investment in new infrastructure, partnerships, innovation, sustainability and brand building over the next three years.

“This new investment to Yingkou is also aligned with the government’s call to develop the Bohai Bay Economic Zone areas and to strengthen our distribution system, especially amongst the second- and third- tier cities,” said Martin Jansen, CEO of Coca-Cola Bottling Investments Group China.

Coca-Cola and its bottlers have always been active corporate citizens in China, promoting sustainable environmental projects and the development of local communities through education and cooperative public-private endeavors with a total contribution of over RMB 200 million in China over the past 30 years.

Coca-Cola is one of the most well-known international brands in China, with a leading position in the soft drinks market. Since re-entering China in 1979, Coca-Cola has invested more than US$5 billion in the local market, including US$3 billion investments from 2009 to 2011. By the end of March 2012, Coca-Cola has established a total of 42 bottling plants in China. Now the Coca-Cola system employs more than 50,000 people, virtually 99 percent of which are local-hires. Coca-Cola and its bottlers have always been active corporate citizens in China, promoting sustainable environmental projects and development of local communities through education and cooperative public-private endeavors with a total contribution of over RMB 200 million in China. Coca-Cola is also the only corporate that has sponsored Special Olympics, Olympic Games, Paralympic Games, EXPO and Universiade in China. For more information about our Company, please visit our website at www.coca-cola.com.cn.

The Coca-Cola Company (NYSE: KO) is the world’s largest beverage company, refreshing consumers with more than 500 sparkling and still brands. Led by Coca-Cola, the world’s most valuable brand, our Company’s portfolio features 15 billion dollar brands including Diet Coke, Fanta, Sprite, Coca-Cola Zero, vitaminwater, Powerade, Minute Maid, Simply and Georgia and Del Valle. Globally, we are the No. 1 provider of sparkling beverages, ready-to-drink coffees, and juices and juice drinks. Through the world’s largest beverage distribution system, consumers in more than 200 countries enjoy the Company’s beverages at a rate of more than 1.7 billion servings a day. With an enduring commitment to building sustainable communities, our Company is focused on initiatives that reduce our environmental footprint, support active, healthy living, create a safe, inclusive work environment for our associates, and enhance the economic development of the communities where we operate. Together with our bottling partners, we rank among the world’s top 10 private employers with more than 700,000 system employees. For more information, please visit our website at www.thecoca-colacompany.com.or follow us on Twitter at twitter.com/CocaColaCo.