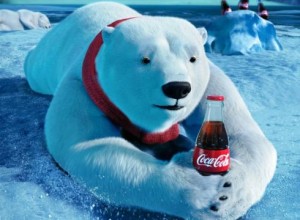 ATLANTA–(BUSINESS WIRE) — The iconic animated Coca-Cola polar bears are back. And, just in time for the Super Bowl XLVI broadcast, they now have a TV, computer, smart phone and tablet device. That’s right, just like 100 million other football fans from around the world, the Coca-Cola polar bears will tune in to watch the big game as they open happiness with an ice-cold Coke and chill on their “snowfa” in the Arctic.“Our digital experience and our new animated polar bear ads highlight the connections and incredible experiences that are created by sharing a Coke”

Coca-Cola is capitalizing on the growing trend of second screen media consumption to extend its connection with fans beyond the television screen to the computer screen and the social media universe. Coca-Cola is launching a unique viewing experience for fans that merges a live digital stream and social media with traditional television advertising. The stars of the campaign are two Coca-Cola polar bears who will be watching the big game live and sharing a Coke from the comforts of their Arctic ice cave.

Fans can join in on the fun and watch the game with the polar bears “in the Arctic” by visiting www.CokePolarBowl.com. The digital platform uses proprietary technology to bring the computer-generated polar bears to life through live animation – a technological first for the big game or any media event. The live stream will showcase the animated polar bears’ reactions to all the plays on the field, the halftime show and highly anticipated commercials.

In a first for Coca-Cola, the polar bears will be “taking over” the official @CocaCola Twitter account on game day. On February 5, the profile photo for Coca-Cola will change from the current Coca-Cola logo to an image of the two polar bears. Using the hashtag #GameDayPolarBears, the polar bears will be sharing their unique perspectives on the game and engaging directly with consumers. Fans will be able to exchange tweets with the bears and share select moments from the live stream with friends via social media. For example, Twitter followers may see this post from a Coca-Cola polar bear: “If you tweet us photos of your own game day party we’ll feature them in our live stream. That is, if the penguin deems them worthy.”

While the two polar bears are both football fans, they are rooting for opposing teams, adding to the fun of watching their expressions of delight or frustration as the game unfolds. Throughout the live stream a variety of ancillary characters, including penguins and a young polar bear stop by the bears’ snow cave to share a Coke and enjoy the festivities.

“Coca-Cola is part of the fun when friends and family gather to celebrate major events like the Super Bowl. This year, we’re offering fans even more ways to connect over a Coke and be entertained by our well-loved iconic polar bears,” said Katie Bayne, president and general manager of sparkling beverages, Coca-Cola North America. “Our bears will come to life on television, digital and mobile screens, as they invite people everywhere to join them watching the big game live from the arctic.”

Two new polar bear television ads will air during the first and second quarter of the Super Bowl broadcast. The ads are part of the Coca-Cola “Open Happiness” campaign and reflect the digital content from the live stream at www.CokePolarBowl.com.

Two versions of “Catch” will be ready to deploy – depending on what is happening in the game and which polar bear is most in need of a Coke based on his favorite team’s performance. Both of the spots conclude with a call for consumers to join the polar bears live at www.CokePolarBowl.com.

“Our digital experience and our new animated polar bear ads highlight the connections and incredible experiences that are created by sharing a Coke,” said Alison Lewis, chief marketing officer, Coca-Cola North America. “We offer fans a light-hearted look at how Coca-Cola can bring everybody – whether human or animated polar bears – together to celebrate moments of happiness and connection even when they are cheering for opposing teams.”

After the game, fans can send a Coke and a little digital happiness to fellow friends and followers from Coca-Cola’s “AHHH Giver” and “ARGH Reliever” app on Facebook. Fans of the winning team can share the cheering “Ahhh” Coca-Cola polar bear and fans of the losing team can send the “Argh” polar bear. Both images will send a coupon for a Coke and a little happiness from the Arctic.

Animators will control the bears and their environment during the game using a combination of traditional video gaming controllers and a proprietary PC-based interface. The animators will be stationed in New York City, in a control room located at MLB Advanced Media, which is a leader in the delivery of streaming content.

This is the sixth consecutive year that Coca-Cola commercials will appear during the Super Bowl broadcast. Coca-Cola worked with Wieden + Kennedy in Portland, Ore., to create and produce the CokePolarBowl.com experience and corresponding TV spots. They collaborated with both Animal Logic in Sydney, Australia and Framestore in New York and London to develop the animations and digital technology.

The Coca-Cola Company (NYSE: KO) is the world’s largest beverage company, refreshing consumers with more than 500 sparkling and still brands. Led by Coca-Cola, the world’s most valuable brand, our Company’s portfolio features 15 billion dollar brands including Diet Coke, Fanta, Sprite, Coca-Cola Zero, vitaminwater, Powerade, Minute Maid, Simply, Georgia and Del Valle. Globally, we are the No. 1 provider of sparkling beverages, ready-to-drink coffees, and juices and juice drinks. Through the world’s largest beverage distribution system, consumers in more than 200 countries enjoy our beverages at a rate of 1.7 billion servings a day. With an enduring commitment to building sustainable communities, our Company is focused on initiatives that reduce our environmental footprint, support active, healthy living, create a safe, inclusive work environment for our associates, and enhance the economic development of the communities where we operate. Together with our bottling partners, we rank among the world’s top 10 private employers with more than 700,000 system employees. For more information, please visit www.thecoca-colacompany.com or follow us on Twitter at twitter.com/CocaColaCo.