Steaz has introduced new packaging and transitioned to a 100 percent green-tea based beverage portfolio, the company announced today in a statement. Steaz, which makes a variety of organic and Fair Trade certified drinks, has already launched its new look energy shots in stores and will begin distributing its zero-calorie sparkling tea products in new 12 oz. sleek cans sometime within the next two months. The roll-out will likely come in phases and depend on how quickly current inventory is sold off, according to the company.

Here is Steaz’ press release on the changes: 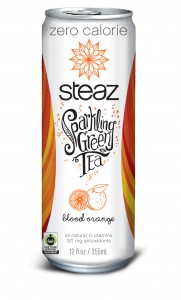 Presently, there are only two non-green tea-based SKUs in the Steaz portfolio.

In 2013, Steaz is also celebrating 10 years in business by unveiling new packaging and continuing its triple bottom-line business practices, which focus on the core values of people, planet, and profits for its Fair Trade farmers. Continuing with the green theme in 2013, Steaz will again donate a percentage of every Steaz beverage purchased at Whole Foods to the Whole Planet Foundation.