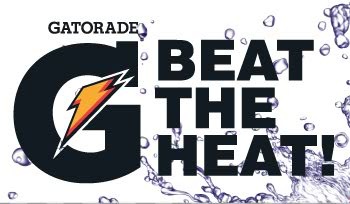 CHICAGO — To help keep athletes safe and performing at their best during the hot summer months, The Gatorade Company, a division of PepsiCo (NYSE: PEP), has partnered with top professional U.S. sports leagues, including the NFL, MLS, MLB and NBA for the Gatorade Beat the Heat educational campaign. In its 10th year, Gatorade Beat the Heat continues to raise awareness among athletes, parents and coaches on how proper hydration can help reduce heat-related illnesses during athletic activity.

While dehydration is a risk across all types of youth sports during the hot summer months, research conducted by the Gatorade Sports Science Institute (GSSI) found that as many as 70 percent of high school football players showed up for practice inadequately hydrated. Additionally, research shows that dehydration or poor hydration increases the risk for heat illness.

“Athletes often don’t understand the amount of fluid they lose from sweating and how important it is to replace those lost fluids during workouts, practices and games,” said Asker Jeukendrup, GSSI global senior director. “The Beat the Heat program gives us and these great partner organizations an opportunity to educate athletes, parents and coaches about the importance of proper hydration and safety measures while practicing and competing in the heat.”

“The Beat the Heat program is important because of its focus on providing educational resources that aid in the prevention, recognition and treatment of heat-related illness during the summer sports season,” said Douglas Casa, Ph.D., chief operating officer of the Korey Stringer Institute (KSI), which is housed at the University of Connecticut. “You can’t change the weather but you can change how you prepare to practice or compete in hot weather. Athletes, parents and coaches do not know that heat-related illnesses are largely preventable with appropriate strategies related to hydration, acclimatization, fitness, cooling and practice modifications.”

“Athletes and coaches on all levels need to pay close attention to the warning signs of heat-related illnesses because safety should not be risked in the name of competition,” said Roberta Anding, sports dietitian for the Houston Texans. “Drinks that contain electrolytes to help retain and regulate fluids are very important. The major electrolyte lost in sweat is sodium, so if your beverage does not contain sodium, it isn’t a sports drink.”

About Gatorade
The Gatorade Company, a division of PepsiCo (NYSE: PEP), provides sports performance innovations designed to meet the needs of athletes at all competitive levels and across a broad range of sports. Backed by more than a 40 year history of studying the best athletes in the world and grounded in years of hydration and sports nutrition research at the Gatorade Sports Science Institute, Gatorade provides scientifically formulated products to meet the sports fueling needs of athletes in all phases of athletic activity. For more information and a full list of products, please visit www.gatorade.com.

PepsiCo is a global food and beverage leader with net revenues of more than $65 billion and a product portfolio that includes 22 brands that generate more than $1 billion each in annual retail sales. Our main businesses – Quaker, Tropicana, Gatorade, Frito-Lay and Pepsi-Cola – make hundreds of enjoyable foods and beverages that are loved throughout the world. PepsiCo’s people are united by our unique commitment to sustainable growth by investing in a healthier future for people and our planet, which we believe also, means a more successful future for PepsiCo. We call this commitment Performance with Purpose: PepsiCo’s promise to provide a wide range of foods and beverages for local tastes; to find innovative ways to minimize our impact on the environment by conserving energy and water and reducing packaging volume; to provide a great workplace for our associates; and to respect, support and invest in the local communities where we operate. For more information, please visit www.pepsico.com.

ABOUT NBA
The NBA is a global sports and media business built around three professional sports leagues: the National Basketball Association, the Women’s National Basketball Association, and the NBA Development League. The league has established a major international presence with games and programming in 215 countries and territories in 47 languages and NBA merchandise for sale in more than 125,000 stores in 100 countries on 6 continents. NBA rosters at the start of the 2013-14 season featured a record 92 international players from 39 countries and territories. NBA Digital’s assets include NBA TV, which is available in 60 million U.S. homes, and NBA.com, which set a record last year with more than 9.5 billion page views, with more than half of all visitors originating from outside of North America. The NBA is the No. 1 professional sports league on social media, with more than 600 million likes and followers globally across all league, team, and player platforms. Through NBA Cares, the league and its teams and players have donated more than $230 million to charity, completed more than 2.8 million hours of hands-on community service, and created more than 860 places where kids and families can live, learn, or play.

Taste Radio: This Is How Innovative Concepts Become Top Brands