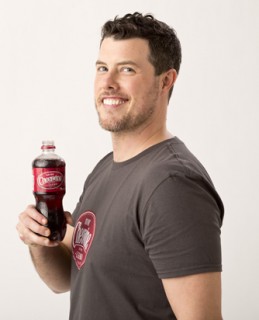 Salisbury, N.C. (PRWEB) March 25, 2015 – As Cheerwine®, the beloved soft drink created in the Carolinas almost 100 years ago, continues to build a national following, the brand is launching a grassroots movement to shine a spotlight on other local legends worthy of nationwide acclaim.

Starting this spring, Cheerwine’s “Local Legends, National Treasures” effort will recognize the “gems” found in every community large and small across this country. Cheerwine is calling on consumers everywhere to visithttp://www.cheerwine.com/locallegends and nominate the individuals, institutions and traditions that are cherished in their town or city. Visitors to the site can also vote for those most deserving of “legend” status, or discover must-see treasures for their next road trip.

Fans of local legends across the country can also post their nominations to Facebook, Twitter or Instagram using the hashtag #cheerwinelocallegend. In addition, Cheerwine will introduce the first-ever face of the brand – not a celebrity, not a made-up character, but a real down-to-earth guy named Bo Stevenson who will serve as “The Legend Hunter,” touring the country in search of amazing local people and places. Bo will share many of his most interesting discoveries in a series of webisodes on social and digital media.

The Local Legends effort is part of Cheerwine’s new brand platform designed to expand the reach of the brand as it spreads across the nation. Even the platform itself is an expression of Cheerwine’s authenticity, the end product of a months-long process in which the brand solicited creative input from the very audience it sought to engage.

Rather than hire a single ad agency, Cheerwine put its marketing in the hands of the marketplace late last year by conducting “The Passion Project,” an organic effort that generated ideas from more than 1,000 creative contributors and crowdsourcing. The entire brand approach, experts say, really resonates with today’s consumers: their need for discovery, their wish for authenticity, and their strong desire for their voices to be heard.

“Today’s consumers, especially the millennials who are so influential to our culture, have a deep appreciation for things that are genuine,” said Tom Barbitta, senior vice president of marketing and sales for Cheerwine. “Because Cheerwine is the real deal, Local Legends, National Treasures seemed natural for us to champion the little guy, the mom-and-pop shops, the incomparable experiences that define our society. A lot of big brands these days are talking about ‘local’ and ‘authenticity,’ but Cheerwine truly has the credibility to tap into those values at a very real and meaningful level. That’s what The Passion Project led us to.”

Another idea generated by The Passion Project is a new ambassadors program Cheerwine is launching to engage the brand’s most ardent fans. The Cheerwine Authentic Soda Society is an exclusive club for “superfans” to share their love of Cheerwine. Society members will enjoy special perks and rewards including unique online “goodies” and insider information, even the opportunity to host Cheerwine sampling parties to turn their friends on to their favorite one-of-a-kind soft drink.

“Cheerwine is a brand of the people, and we love all of our fans,” explains Barbitta. “Some of them love us back in ways that are really special, so we created the Cheerwine Authentic Soda Society to give them tools to spread that love driven by the mantra, ‘Life, Liberty and the Pursuit of Cheerfulness.’”

The Passion Project also introduced Cheerwine to Bo Stevenson, a former Hollywood production assistant who left the hectic L.A. entertainment scene a few years ago for a more laid-back life in the Carolinas. As the driving force behind the Local Legends effort, Bo will tap into social media to share his discoveries and urge more suggestions, all while touring the country to create videos that showcase these emerging national treasures.

The first leg of Bo’s tour will span several months and take him to the deep south, with stops in Alabama, Mississippi and the Florida Panhandle. He’ll also visit the heart of Cheerwine’s popularity with trips to the Carolinas, Kentucky, Tennessee and Virginia. Along the way Bo will hit great BBQ joints, check out up-and-coming bands at local music venues, and discover countless other local legends – the places and people that make our country and culture so rich and unique.

“Cheerwine has such an amazing and loyal fan base,” said Bo, “and I’m honored to be their voice as we look to uncover local legends all across the country. I’m excited to hit the road, meet interesting people, visit remarkable places and document the journey so we can share it with others.”

The Local Legends, National Treasures tour will be supported by sampling events, local radio, social and digital media and public relations across key market areas, and depicted on specially designed packaging that will appear on store shelves in the second quarter of 2015. Barbitta says the company’s network of independent bottlers and retail partners are also enthusiastically activating the new brand platform in their local markets, driving consumer awareness and appreciation for the attributes that have made Cheerwine a local legend and national treasure in its own right for nearly a century.

“Cheerwine has been ‘crafted’ from its beginning, so there’s never been a better time for people to connect with Cheerwine, which is in lock step with the desires and values of today’s consumer,” said Cliff Ritchie, the fourth-generation CEO of the nearly 100-year-old company. “The taste of Cheerwine is delicious and memorable, but without question the heritage of our brand is one of our greatest assets. Our new platform will activate that heritage to help us achieve what has always been Cheerwine’s goal: to put smiles on more people’s faces.”

Launched in 1917 by L.D. Peeler, Cheerwine is an iconic soft drink with a flavor that always surprises. Owned and distributed by the Carolina Beverage Corp. and Cheerwine Bottling Co. of Salisbury, N.C., the 98-year-old company is still privately owned and has been managed by the same founding family for five generations. Available in supermarkets, restaurants, mass merchandisers and convenience stores in select states nationwide and on the website at http://www.cheerwine.com.