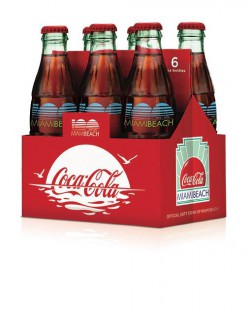 “We are very excited about this collaboration of showcasing two world-renowned and coveted brands, Miami Beach and Coca-Cola, on the commemorative centennial bottle,” said Miami Beach Mayor Philip Levine. “Our city’s future hinges on continued sustainable efforts and with Coca-Cola as our recycling partner, we look forward to continued promising opportunities with them.”

Beginning Friday, January 16, 2015, people can visit Miami Beach retailers to purchase their own six-pack of the limited-edition collectible bottles, while supplies last.

“As the city enters its second century, Coca-Cola will continue to foster this special relationship, guided by our belief in giving back to communities where we do business,” said Melanie Jones, General Manager, South Florida Market Unit, Coca-Cola Refreshments. “Today, we demonstrate our ongoing support for Miami Beach by showcasing their centennial logo on another American Icon, the Coca-Cola Bottle.”

The Coca-Cola Company (NYSE: KO) is the world’s largest beverage company, refreshing consumers with more than 500 sparkling and still brands. Led by Coca-Cola, one of the world’s most valuable and recognizable brands, our Company’s portfolio features 17 billion-dollar brands including Diet Coke, Fanta, Sprite, Coca-Cola Zero, vitaminwater, Powerade, Minute Maid, Simply, Georgia and Del Valle. Globally, we are the No. 1 provider of sparkling beverages, ready-to-drink coffees, and juices and juice drinks. Through the world’s largest beverage distribution system, consumers in more than 200 countries enjoy our beverages at a rate of 1.9 billion servings a day. With an enduring commitment to building sustainable communities, our Company is focused on initiatives that reduce our environmental footprint, support active, healthy living, create a safe, inclusive work environment for our associates, and enhance the economic development of the communities where we operate. Together with our bottling partners, we rank among the world’s top 10 private employers with more than 700,000 system associates. For more information, visit Coca-Cola Journey at www.coca-colacompany.com, follow us on Twitter attwitter.com/CocaColaCo, visit our blog, Coca-Cola Unbottled, at www.coca-colablog.com or find us on LinkedIn atwww.linkedin.com/company/the-coca-cola-company.

With an average year-round temperature of 75 degrees, Miami Beach blends the pleasures of a tropical island with that of a sophisticated metropolis. The 7.2 square mile island city is the pulse of South Florida. From walkable neighborhoods, white, sandy beaches, clear aquamarine waters, and an extensive park system to its rich Art Deco and MiMo history, fine dining, and diverse and unique entertainment and cultural offerings, Miami Beach is where everyone wants to come to live, work and play.

A popular destination among travelers, Miami Beach frequently ranks on many lists as a top destination in the U.S. and the world for its breathtaking beaches, world-renowned cultural arts, historic architecture, and diverse things to do.

Miami Beach is perfectly seasoned — it is like no other place in the world.