Praised by analysts and embraced by consumers, the Coca-Cola Co.’s “Share a Coke” campaign is coming back.

As expected, Coke today announced the return of the popular marketing program, which first appeared in Australia in 2011 and had a highly successful run during its U.S. debut last year. The focus of the campaign was a label swap in which Coke replaced its iconic logo on select and limited-edition 20 oz. bottles of Coke, Diet Coke and Coke Zero with 250 of the most popular names in the U.S. along with other well-known nicknames, such as “Buddy.” 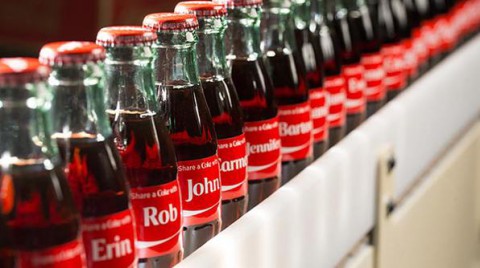 Coke encouraged consumers to buy and share the limited-edition products with family and friends and post images of the bottles on social media with an attached hashtag of #ShareaCoke. The campaign ended up being a remarkable success for Coke and is credited as playing an impactful role in volume growth of the company’s carbonated soft drinks, a remarkable turn following an 11 year decline in sales.

The 2015 Share a Coke campaign will feature four times the number of names as the 2014 edition and also encompass different package sizes, with 1.25 L and 2 L bottles, and 12 oz. cans now in the mix. Coke has also added an option to customize 8 oz. glass bottles of the sodas with personalized names and messages via an e-commerce site.

Below is the Coke’s full press release about the return of the campaign.

“Share a Coke” Returns with 1,000 Reasons to Enjoy a Coke This Summer

ATLANTA–(BUSINESS WIRE) — Coca-Cola is bringing back one of its most successful U.S. programs of all time. “Share a Coke” swept the nation last summer and, beginning this week, Coca-Cola bottles across the country will once again feature the names of millions of Americans.

Back by popular demand, Coca-Cola will swap out its iconic logo on 20-ounce bottles of Coca-Cola®, Diet Coke® and Coke Zero™ for 1,000 of the most popular names in the country – quadrupling the number of names featured in 2014.

For those who aren’t able to find their names – or enough of a particular name – on store shelves, the Company will deliver “Share a Coke” to doorsteps around the country. This year, Coca-Cola will offer an e-commerce site on which fans can personalize and purchase iconic eight-ounce glass “Share a Coke” bottles. From prom to graduation, Mother’s Day to weddings, it has never been easier and more exciting to share a Coke with family, friends, party guests, colleagues and more.

“The return of ‘Share a Coke’ brings four times as many names, twice as many packaging options and countless more opportunities for people to connect over a Coke,” said Evan Holod, Coca-Cola brand director, Coca-Cola North America. “We took inspiration from our most loyal fans and created more opportunities for people to get involved, make ‘Share a Coke’ their own, and create new memories with an ice-cold, delicious Coca-Cola. Whether it’s celebrating a proposal, creating baby announcements or just enjoying time with a friend, Share a Coke can make those moments even more special.”

Purchase options on the “Share a Coke” e-commerce site, at ShareaCoke.com, include individual eight-ounce glass bottles and six-packs of eight-ounce glass bottles of Coca-Cola. This marks this first time U.S. residents have been able to customize and purchase “Share a Coke” bottles online, creating nearly endless ways to experience the magic of sharing all summer long.

In addition to 20-ounce bottles and the ability to buy “Share a Coke” bottles online, store shelves and coolers will offer more ways for people to enjoy special moments – and a Coke – with friends and family. Coca-Cola, Diet Coke and Coke Zero logos will give way to group names like “Class of 2015,” “Team” and “Family” on 1.25- and 2-liter bottles, and 12-ounce cans will feature colloquial nicknames like “Sis,” “Bro,” “Better Half,” “Sidekick” and “Favorite.”

“Share a Coke” packaging also will extend to eight-ounce glass bottles and aluminum bottles, which will feature more nicknames like “Grad,” “Hero” and “Bestie,” as well as mini cans, which will feature nicknames and emoticons. Sharing will also come to life through Coca-Cola Freestyle fountain dispensers, which will offer three limited-time “Share a Coke” mixes called “BFF,” “VIP” and “Legend.” All three flavors are available on the dispenser home screen, and those who use the Coca-Cola Freestyle app will be able to unlock a “secret” fourth mix.

“We can’t wait to see how fans share their amazing stories again this year – in real life and through social media. People invited Coca-Cola into their lives and took ownership of the campaign as a way of self-expression,” said Jennifer Healan, group director, Integrated Marketing Content, Coca-Cola North America. “Coca-Cola brings people together all around the country, and we can’t wait to see how Americans share a Coke again this summer.”

The Company is supporting the “Share a Coke” campaign through a nationwide advertising and marketing campaign, including an 11-week flight featuring TV commercials, cinema ads, social and digital engagement and experiential engagements from coast to coast. People who use the campaign hashtag, #ShareaCoke, to celebrate stories and share photos will have the chance to be featured on Coca-Cola billboards in their geographic area.

For those who want to enjoy the experience of “Share a Coke” with friends and family, visit ShareaCoke.com to find out if a name is available on store shelves, or customize and purchase a glass bottle. Coca-Cola will take “Share a Coke” across the country this summer, customizing more than one million Coca-Cola, Diet Coke or Coke Zero mini cans (7.5 ounces) at over 600 tour stops. More information about the campaign’s experiential tour also will be available on the website, and live location updates are available by following @ShareaCokeTour on Twitter.

The “Share a Coke” program was first introduced in Australia the summer of 2011-12. Since then, the Company has helped people “Share a Coke” – and a little happiness – in more than 80 countries around the world, including New Zealand, Argentina, Brazil, South Africa, Great Britain, Turkey, Germany, Spain and Chile.

The Coca-Cola Company (NYSE: KO) is the world’s largest beverage company, refreshing consumers with more than 500 sparkling and still brands. Led by Coca-Cola®, one of the world’s most valuable and recognizable brands, our Company’s portfolio features 17 billion-dollar brands including Diet Coke®, Fanta®, Sprite®, Coca-Cola Zero™, vitaminwater®, Powerade®, Minute Maid®, Simply™, Georgia® and Del Valle®. Globally, we are the No. 1 provider of sparkling beverages, ready-to-drink coffees, and juices and juice drinks. Through the world’s largest e beverage distribution system, consumers in more than 200 countries enjoy our beverages at a rate of 1.9 billion servings a day. With an enduring commitment to building sustainable communities, our Company is focused on initiatives that reduce our environmental footprint, support active, healthy living, create a safe, inclusive work environment for our associates, and enhance the economic development of the communities where we operate. Together with our bottling partners, we rank among the world’s top 10 private employers with more than 700,000 system associates. For more information, visit Coca-Cola Journey at www.coca-colacompany.com, follow us on Twitter at twitter.com/CocaColaCo, visit our blog, Coca-Cola Unbottled, at www.coca-colablog.com or find us on LinkedIn at www.linkedin.com/company/the-coca-cola-company.