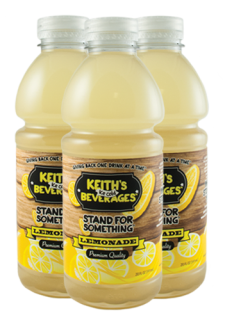 A “Who” did “What”?  “Keith’s Ice Cold Beverages, LLC” (KICB), located in Tulsa, OK, was founded by eleven year old Keith Boyd, and is sharing Keith’s story “One Drink at a Time”.  He is manufacturing, distributing and selling a 20 ounce premium, all natural lemonade to grocers, big box retailers and convenience store chains.  Currently in over 100 locations in NE Oklahoma, you can’t help but wonder, “How did he get to where he is now?”

.What you don’t know about Keith, this amazing eleven year old, is that he was born with Spastic Quadriplegia Cerebral Palsy.  Keith cannot speak, walk, sit up or manipulate things with his hands.  Keith uses a Tobii device that refracts light off of his pupils, back onto a screen that he navigates through and manipulates WITH HIS EYES!  This machine is Keith’s voice – it actually speaks for him once he completes the phrase or sentence he formulates.  Not only that, he surfs the web, manages his Facebook pages, creates documents and shows the world what a creative mind he has trapped inside his broken body.

In Spring of 2012, 8-year-old Keith Boyd, wanted to raise money for a toy truck.  With Christmas far away and no birthday in sight, his parents asked him to come up with an idea to do so.  What was the idea?  Tulsa’s best lemonade stand.

Keith’s lemonade stand was very successful and he raised enough money for his toy.  But there was more money left over, and Keith made the decision to give back.  He did so by giving the rest of the money to his Alma Mater, The Little Light House, a school for special needs children ages birth through six.  Keith was a student there for five years.  The Little Light House was instrumental in his success using the Tobii device, giving Keith a voice.

After another successful 2013 lemonade stand, Arthur Greeno, a Chick-fil-A Franchisee and Board Member at The Little Light House, heard Keith’s story and wanted to meet with him.  The two hit it off, and came up with a goal – 100 lemonade stands in ten weeks.  “I knew we could do it, when this 10 year old showed up with a business plan in hand on our first meeting”.

“Keith’s Ice Cold Lemonade Stand” launched in the summer of 2014 with 10 locations all over the Tulsa market every week, and raised over $150,000 for The Little Light House.  The community response was immense with over 1,000 volunteers and organizations stepping up to “Stand for Something” with Keith.  Each stand had corporate and/or private backing and were strategically located all over the Tulsa Metro area, every Wednesday from 10AM-2PM.  The local FOX affiliate offered to shoot a commercial with Keith and their meteorologist James Aydelot, and ran prime time commercial ads for three months.  An outdoor advertising agency, Lamar, developed and posted digital billboards throughout the city, and press releases were issued throughout the duration of the campaign.  As of April of 2015, the revenue continues to pour into The Little Light House and through the work of 2014, Keith’s Ice Cold Lemonade Stands has raised $150K.

The exposure was so great that Keith and his team decided it was time to take another step and continue the mission to give back and stand for others.  Hence the birth of the retail package line and LLC, “Keith’s Ice Cold Beverages”.  Product development and beverages industry relationships were formed starting in August of 2014.  The LLC was filed in September, corporate structure was finalized in October and the first product run was completed and on the shelves of Tulsa’s local grocery store chain, “Reasor’s”, on December 23rd. 2014.

Since then, KICB, LLC has been growing quickly.  Keith’s product is now in over 100 retail outlets, including 72 QuikTrip locations in Tulsa, OK.  Over the next six months, he is gearing up to reach out to other retail outlets and double the number of locations Keith’s Ice Cold Premium Lemonade is being sold in.  Once KICB establishes strong, proven sales with continued growth during our first “beverage season”, we plan on growing our portfolio and introduce two additional product lines – “Keith’s Ice Cold Strawberry Lemonade” and “Keith’s Ice Cold Cherry Limeade”.  We have sourced out customer feedback through demonstrations and these two additional flavors received the most popular votes.

Proceeds directly benefit the Keith Boyd Foundation.  It’s mission is to change the world’s perception of non-verbal special needs children, just like Keith, by giving them a voice so that they too can share their dreams with others.  The Keith Boyd Foundation does this by helping provide the tools, resources and education for non-verbal individuals that show the ability to utilize augmentative speech devices and communicators.  These devices open doors to the world for these children, and allows them the opportunity to participate in their lives instead of being a spectator.

Long term, KICB envisions having five to seven new products being distributed throughout the south-central region of the US.  Potential markets are Dallas, OKC, St. Lous, Kansas City, Wichita, Springfield and NW Arkansas.  Most of these markets have brokers that dominate the marketplace and will be sourced to represent KICB.