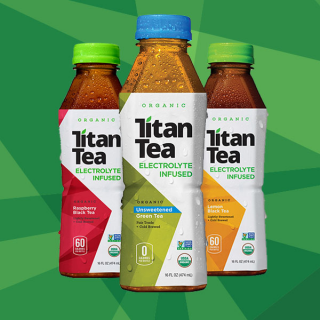 NEW YORK, July 28, 2015 —Titan Tea, an organic line of electrolyte infused teas, is now available nationwide thanks to its partnership with leading natural foods distributor, UNFI. As the first functional tea to hit store shelves, Titan Tea is a strong addition to the distributors catalog of natural, organic and specialty foods and products.

“The need for expanded distribution was spurred by the push towards a health-conscious future amongst consumers and buyers seeking functional and pure products,” stated Titan Tea Founder, John Gagliardi. “Our electrolyte-infused, organic teas are a much healthier alternative to the sugar-laden and artificial drinks on the market being widely consumed by all, including athletes and children.”

Now available in UNFI’s distribution network nationally, to kick off its expansion, Titan Tea will be introduced through UNFIs Speed to Market Program, making the product available in 300 of UNFI’s top independent retailers who want to be among the first to offer their customers the newest natural and organic products.

Titan Tea is advanced hydration for the ever-evolving athlete in all of us. Each bottle of organic, cold-brewed tea is infused with electrolytes to keep you going strong. The lineup features six lightly sweetened flavors (with two unsweetened flavors coming soon). Titan Tea is all organic, non-GMO, and low calorie—so you can hydrate, energize, and never compromise. Learn more at www.titantea.com.

United Natural Foods, Inc. carries and distributes more than 65,000 products to more than 31,000 customer locations throughout the United States and Canada. The Company serves a wide variety of retail formats including conventional supermarket chains, natural product superstores, independent retail operators and the food service channel. United Natural Foods, Inc. was ranked by Fortune in 2006 – 2010 as one of its “Most Admired Companies” and in 2012 as one of its “Most Admired American Companies”, winner of the Supermarket News 2008 Sustainability Excellence Award, recognized by the Nutrition Business Journal for its 2009 Environment and Sustainability Award and chosen by Food Logistics Magazine as one of its 2012 Top 20 Green Providers.