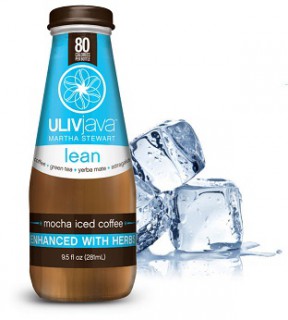 CROSS RIVER, NY, FEBRUARY 6, 2015 – It’s not news that blended ice coffees are among the fastest growing segments in the specialty beverage industry. With projected sales of over $9 billion in 2015, marketers are rushing to bring new products to market.  A recent study found that new ready-to-drink (RTD) coffee products accounted for 4.2 percent of global beverage launches in 2014.

But ULIVjava’s line of functional iced coffees – made with organic Fair Trade coffee blended with herbs and botanicals – are defining a new segment within the category, and enjoying the overwhelming response from consumers who are eager to have healthy, nutritious and low-calorie coffee beverages!  In the seven months since the company released its line of RTD blended ice coffees in July 2014, ULIVjava has firmly established its place as a leader in the Coffee with Benefits segment.  According to the company’s mission statement, the founders ‘seek to create and promote truly healthy, great tasting, superior coffee products…while improving the health of individuals.”  From the rapid growth in sales – ULIVjava’s line of iced coffees were instantly picked up for distribution by Manhattan Beer Company  — it seems the company is staking out new ground, and is quickly occupying the real estate. ULIVjava’s iced coffee drinks are now available in many of the New York metro areas tony retail and independent stores, and nationwide on Amazon.com and ulivjava.com.

The critics also agree that ULIVjava is on to something sweet…Shortly after ULIVjava debuted at the 2014 Summer Fancy Food Show in New York City, one reviewer named ULIVjava among his ‘top finds’ writing,  “[ULIVjava] was by far the most delightful and rewarding iced coffee I’ve ever had!”  (http://eco18.com/top-18-finds-at-the-2014-fancy-food-show/).  More recently, Westchester Magazine included ULIVjava in The Best Food Trends in Westchester From the Past Year (http://www.westchestermagazine.com/Blogs/Eat-Drink-Post/January-2015/Best-Food-Trends-Westchester/). There’s more. Testimonials from customers and the company’s own Martha Stewart who states, “I love everything ULIVjava stands for – health and wellness with your daily coffee.”

“Best tasting coffee! Going to give Starbucks a run for the money.” MaryJean

“Best coffee I’ve ever had! And it’s all natural! Truly amazing!” Hannah

“Thanks for sharing your coffee. Delish AND good for me.” Kim

ULIVjava is preparing for exponential growth in 2015 with the addition of several almond-milk based beverages to its line, and showcase sales at Martha’s Cafe opening February 2015 in NYC.

In 2014, ULIVjava also introduced a line of organic Fair Trade ground coffees in “lean,” “happy,” and “smart” varieties blended with herbs that are used to boost metabolism, reduce stress, and to boost your brain health. ULIVjava’s ground coffees are being marketed as replacements for regular coffee.  A 12oz (340g) bag retails for $14.99.  ULIVjava “lean,” “happy,” and “smart” coffees are available at Martha’s Cafe in NYC beginning February 2015, and online at ebay and ULIVjava.com.