LOS ANGELES, Oct. 20, 2015 /PRNewswire/ — Wildfox announces its ‘Coca-Cola Bottle’ collection in celebration of the 100thanniversary of the release of the original bottle patented in 1915. The collection offers a limited edition 14-piece capsule of Coca-Cola licensed products including t shirts, tanks, jumpers, and sweaters.

CEO, Jimmy Sommers, says, “That bottle represents so much for the brand and we were excited to team up with Coca-Cola to explore that part of America’s history and culture.”

The campaign was shot by photographer Mark Hunter featuring Mackii Shaye atop popular Los Angeles destination, Runyon Canyon. The shoot was inspired by happy moments; early morning air, your favorite tennis shoes, making it to the top and an ice cold Coke. 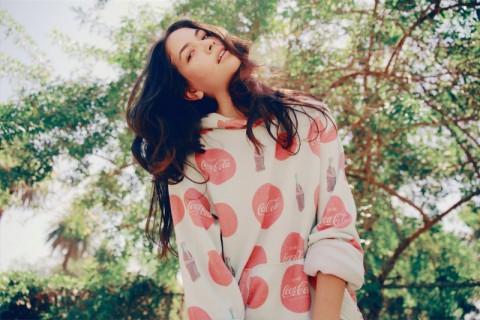 All-over bottle prints and fonts bring a bit of nostalgia when seeing the collection for the first time. Popular styles include the ‘Spin The Bottle’ sublimation print offered on either a Baggy Beach Jumper or Keaton Tank. Also, the ‘Mighty Refreshing’ Sweater with the old-school Coca-Cola logo printed on our famous soft sweater fabric. Prices range between $58-$118.

The Coca-Cola Bottle Collection will be available starting October 20, 2015 at both Wildfox Retail locations in Los Angeles and Malibu, Wildfox.com as well as at select boutiques and department stores worldwide.

Wildfox is a vintage-inspired women’s knitwear brand based in Los Angeles. The label was co-created by two best friends who were inspired by a love for vintage tee shirts and the magic of everlasting friendship.

Known for its iconic campaigns, dreamlike quality, and clothes that tell a story, Wildfox has grown to include a full range of tops, bottoms, dresses, and skirts, while the White Label collection offers a range of luxuriously soft sweater knits, laces, chiffons, velour, and sequins. Wildfox Kids, the “little sister” adaptation of the women’s line, launched in 2009. Today, Wildfox continues to develop its lifestyle brand with a wide range of Intimates, Swim, Sun, Denim and Accessories. In August 2015, Wildfox expanded into the beauty category with the debut of its first fragrance, in partnership with Elizabeth Arden.

The brand can be found in better retail boutiques nationwide including Ron Herman, Planet Blue, Akira, and Shopbop, along with select department stores such as Bloomingdale’s, Saks Fifth Avenue, Nordstrom and Neiman Marcus. The largest selection of Wildfox can be found at Wildfox.com.

In 2014, Wildfox launched its first flagship store in the renowned Sunset Plaza in West Hollywood, CA. A second retail location opened in 2015 at the Malibu Country Mart in Malibu, CA.

Internationally, Wildfox is distributed in over 30 countries worldwide including the U.K., France, Spain, Germany, Brazil, Japan, South Korea, Australia, Russia, and Taiwan; and can be found in such stores as Selfridges, Harvey Nichols, Harrods, and TSUM.