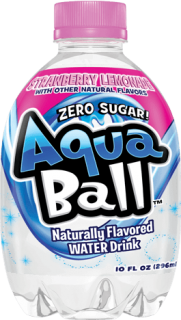 I wanted to update you on the progress we have made since my update in April. As I previously shared with you, this year has been a relaunch of our new preservative-free formula of AquaBall Naturally Flavored Water with a revamped sales team and an improved operations platform through our co-packing relationship with Niagara Bottling, LLC. We have received over $3.6 million of the $5 million capital raise we secured in April with the remaining funds due by the end of August. In May, we commenced our first production run with Niagara, the largest producer of bottled water in the United States, and the first shipments of the new preservative-free formula of AquaBall commenced in June. Our agreement with Niagara also helps improve our financial position, as Niagara finances inventory until it is sold. This provides us with increased cash resources, which we are spending on our revamped sales team leading to tremendous early results.

Jeff Culbertson, our VP of Sales, restructured our sales team after his arrival in April. Jeff’s focus has been on generating new points of distribution and on driving revenue through those distribution points. To execute his plans, he hired industry veterans at both the National Accounts Manager and the Regional Sales Manager levels. We are pleased to introduce our new East and West National Accounts Managers: Stephanie Borselli, with over 20 years of CPG experience, and Ryan Clayeaux, with over 25 years of CPG experience. These National Accounts Managers will focus on gaining distribution with national accounts and driving velocity through these accounts with aggressive promotional plans aided by our distribution network. Our Regional Sales Managers are responsible for working directly with our DSD (Direct Store Distribution) Network to deliver and merchandise at the store level. They will also handle expanding our distribution with regional accounts and expanding our presence in the grocery, drug and convenience store channels. Our new bottle, with its sleeker design and the ability to fit into convenience store glide racks, has been well received by the convenience channel, and we anticipate significant gains in this channel through the remainder of 2016 with large gains coming in early 2017 when most convenience stores reset their shelves.

Since the introduction of our new preservative-free AquaBall in June, we have achieved numerous wins across all channels. Our sales team is consistently delivering key gains in distribution and the expansion of our DSD Network. The following is a summary of these recent achievements:

It is important to note that AquaBall continues to maintain its status as a first mover in the children’s beverage category, and remains the only zero sugar option among flavored beverages for kids. This positions AquaBall as the leader in the discussion regarding one of the most significant health risks facing our children, the increasing epidemics of childhood obesity and diabetes. I believe we will begin to see a more aggressive push by the large beverage companies to address zero-sugar beverage offerings as carbonated soft drinks continue to decline in sales. Over the next few weeks, we will begin a video campaign highlighting AquaBall’s definitive stand against excessive sugar in children’s beverages. Being a first mover in the category and putting the health of children at the forefront can be met with tremendous pushback, however, we are determined to make a difference and to be the market leaders.

About True Drinks, Inc.True Drinks is a healthy beverage provider with licensing agreements with Disney and Marvel for use of their characters on its proprietary, patented bottles. AquaBall™ is a naturally flavored, vitamin-enhanced, zero- calorie, zero-sugar, zero-preservative, dye-free alternative to juice and soda. AquaBall™ is currently available in four flavors: fruit punch, grape, berry and strawberry lemonade. Their target consumers: kids, young adults, and their guardians, are attracted to the product by the entertainment and media characters on the bottle and continue to consume the beverage because of its healthy benefits and great taste. For more information, please visit www.aquaballdrink.com andwww.truedrinks.com. Investor information can be found at www.truedrinks.com/investor-relations/. Proudly made in the USA.

FORWARD-LOOKING STATEMENTS Any statements contained in this document that are not historical facts are forward-looking statements as defined in the U.S. Private Securities Litigation Reform Act of 1995. Words such as “anticipate,” “believe,” “estimate,” “expect,” “forecast,” “intend,” “may,” “plan,” “project,” “predict,” “if,” “should” and “will” and similar expressions as they relate to True Drinks, Inc. are intended to identify such forward-looking statements. True Drinks, Inc. may from time to time update these publicly announced projections, but it is not obligated to do so. Any projections of future results of operations or the anticipated benefits of the merger and other aspects of the proposed merger should not be construed in any manner as a guarantee that such results or other events will in fact occur. These projections are subject to change and could differ materially from final reported results. For a discussion of such risks and uncertainties, see “Risk Factors” in True Drink’s report on Form 10-K filed with the Securities and Exchange Commission and its other filings under the Securities Exchange Act of 1934, as amended. Readers are cautioned not to place undue reliance on these forward-looking statements, which speak only as of the dates on which they are made.