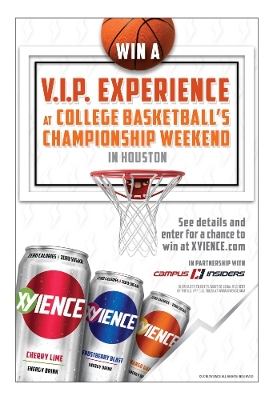 In the twelve-episode series titled “Seth Davis’ X-FACTORS”, Davis will break down college basketball’s top teams and what makes them contenders for the national championship. Analysis will include highlights and discussions of individual players, coaching strategies and the strengths of teams’ overall tournament resumes. XYIENCE will serve as the program’s title sponsor as well as advertise on the Campus Insiders network throughout the college basketball season leading up to the NCAA tournament. The premiere episode launches today and is available on campusinsiders.com.

“This has been a very unpredictable season so far, and I’m excited to provide my thoughts on what the top players and teams need to do in preparation for the tournament,” says Seth Davis. “Thank you to XYIENCE for helping us create and deliver this exclusive content to college basketball fans.”

The V.I.P. national championship experience, provided in partnership with Campus Insiders, will include airfare, hotel and tickets to the semifinal and final games. The winner will also receive credentials granting floor access, attend an exclusive hospitality event and meet with Campus Insiders on-air talent. The sweepstakes will be promoted online and supported with in-store point-of-sale displays. Basketball fans may enter now through March 16 for their chance to win at XYIENCE.com.

“Since our re-launch in September, college sports has proven to be an extremely effective platform building awareness for the brand,” says Thomas Oh, SVP of Marketing at Big Red. “As we expand our presence in college sports to include basketball, Campus Insiders was the obvious choice for a digital partner, and we couldn’t be happier working with Seth Davis, one of the foremost authorities on college basketball.”

ABOUT SETH DAVIS
Seth Davis is an award-winning writer, broadcaster and best-selling author who has distinguished himself as one of the nation’s foremost experts on college basketball. In addition to “Seth Davis’ X-FACTORS,” Davis hosts the Seth Davis Show on Campus Insiders, featuring in-depth interviews with some of the biggest personalities in sports and entertainment. Davis can be found on Twitter at @SethDavisHoops.

ABOUT XYIENCE (pronounced zi-ence)
Launched in 2006 and now headquartered in Austin, Texas, XYIENCE is the original zero calorie energy beverage with all natural flavors and colors. XYIENCE is available in eight exclusively zero calorie flavors: Cherry Lime, Mango Guava, Frostberry Blast, Blue Pomegranate, Cran Razz, Fruit Punch, Tangerine and Melon Mayhem. XYIENCE is marketed strictly to consumers ages 18 and over. XYIENCE was acquired by Big Red, Inc. in 2014. Find more info about XYIENCE online at www.XYIENCE.com or at a retailer near you. Connect with XYIENCE on Facebook, Twitter, Instagram and YouTube.