Two years after launching in the U.S., Caribe is going home.

With the long-term goal of further U.S. expansion firmly in its sights, the Sterling, Virginia-based cold-pressed juice company, which specializes in the tropical fruits and flavors of founder Luis Solis’s native Dominican Republic, has raised $2 million from a group of investors to build a new production and co-packing facility in the Dominican Republic which is set to go online this fall. The facility, which is a separate corporate entity, will then license the rights to produce and distribute Caribe, which is currently made in New Jersey.

The moves serves to not only bring down costs and streamline production, but also to help the brand generate momentum in its own backyard that can eventually translate stateside.

“For us as a co-packing facility, our goal would be to take the Caribe brand and implement it there successfully and invest some marketing dollars to create that new market for cold-pressed juices with flavors that are familiar to people there,” said Solis, who founded the company in 2015 while studying at the University of Virginia. “It’s a great opportunity to create some brand equity in a new region that we haven’t really done any selling to and at the same time enable us in the long term to reduce our costs and become more competitive in the developed market such as the U.S. and eventually Europe and other countries.” 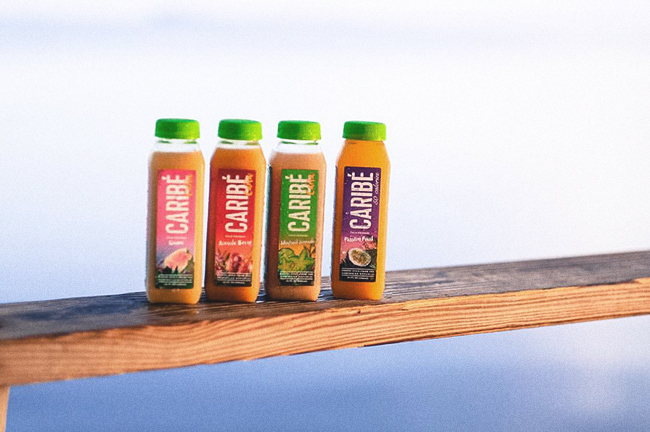 Solis explained that 75 percent of the $2 million will go towards the new facility, which will include high-pressure processing (HPP) equipment and have an expected output of 100,000 10 ounce bottles of juice per month. He said that plant would focus mainly on Caribe for its first two years in operation before exploring co-packing opportunities, with the expectation that increased production capacity and additional equipment will be required.

“In the long term, even if we still do part of the process [in the U.S.], it gives us a lot of flexibility in terms of product development, of getting enough volume and better prices on fruits and ingredients, and of being able to further our social mission of helping farmers,” said Solis. “Our goal is going to be trying to integrate the supply chain as much as we can in the next five years, that way we can have a much lower cost and also be supporting more farmers and creating more jobs.”

By streamlining the production process in the Dominican, Solis will also be introducing Caribe to his home country for the first time with the aim of carving a niche for the brand in the Caribbean region as a cold-pressed HPP juice that can compete in terms of both flavor and price. Once the plant is up and running, he plans to launch in the Dominican at a retail price under $2 per 10 ounce bottle, where it can compete against products such as Gatorade and V8 Splash.

“I don’t think there’s any HPP juice that has secured any significant market share in that region,” said Solis.

But, to be clear, Caribe is not leaving the U.S. market. The brand’s four flavors of high-pressure processed (HPP) juices — Acerola Berry, Guava, Passion Fruit and Starfish Limeade, each also available in a reduced calorie version sweetened with stevia, monk fruit and erythritol — are currently sold at 160 stores in the Miami and Washington, D.C. metro areas. Solis told BevNET the brand’s recently signed partnership with natural distribution powerhouse UNFI will double Caribe’s retail presence by the end of summer and help the company’s execute its plans for expansion in New York City, where it hopes to leverage the brand’s equity with Latin American consumers.

In positioning the brand, Solis explained he recognized that Caribe could go in two directions: as a premium exotic juice focused on the natural channel, or as a conventional item that could compete with Naked, Bolthouse and cold-pressed juices found at conventional retailers. He opted for the latter.

“We started going for the first one, but we realized that it’s a much longer road and much more expensive in terms of marketing to and educating consumers,” he said. “Once we are able to penetrate with international audiences, then it’s much easier to use that to expand and become more of a mainstream product. We truly believe that we are a mainstream product.”