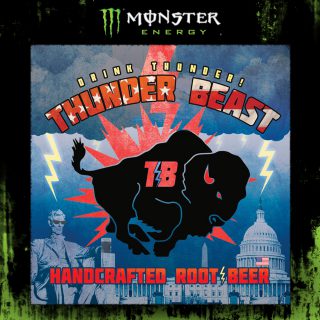 A story in The Washingtonian chronicles how a Washington, D.C.-based craft root beer brand is turning the tables on Monster Beverage Corp. after the energy drink giant accused them of trademark violations.

Thunder Beast, which offers root beer in classic and seasonal varieties, as well as a ginger beer, operates from the TasteLab food incubator in northeast Washington, D.C. According to the article, published March 28, the company received a cease and desist letter from Monster Beverage roughly a year ago objecting to Thunder Beast’s use of the word “beast” in its name.

While Monster prepared for trial, its lawyers let slip that they didn’t have a case, and finally presented Thunder Beast founder Stephen Norberg with reasonable settlement terms.

Yet in a surprise move, Norberg rejected the settlement on moral grounds, telling The Washingtonian he is eager to have his day in court.

“I wanted to publicly defend so that when other small businesses get harassed by Monster Energy, they will be able to research this issue and see that they have a history of doing this and that it’s possible and fairly easy for the underdog to stand up to these big corporate bullies and defeat them if you’re in the right,” he said.

Thunder Beast is raising money for legal fees associated with the case on its website, which contains a description of the case framing it as the story of an upstart entrepreneur who invested his life savings into his company being squeezed by a “known fat cat corporation” and “corporate bully.” In a particularly effusive passage, the litigation is described as “a showdown of epic proportions between two mythical creatures locked in a vicious struggle to claim ultimate beverage supremacy.”

According to a lawsuit filed in U.S. District Court in Washington in March, Vicky Silva, a consumer in Oregon, claims she was tricked into buying the brand’s coconut flavored sparkling water when the product did not actually contain any coconut. Silva filed the complaint on behalf of all others similarly situated.

When Silva e-mailed Unique Beverage with her complaint, the company responded that its sparkling water are flavored with “all natural fruit essences.”

The complaint alleges that Unique Beverage featured the word “coconut” and images of coconuts on the product’s label when it contained “no coconut, no coconut water, no coconut juice, no coconut pulp, no coconut jelly, no coconut natural flavor, has no coconut health qualities, and does not taste like coconut.”

Attorneys are asking the court to file an injunction requiring Unique Beverage to change the labels on its coconut sparkling waters to clearly indicate that the beverage does not contain coconut, as well as monetary damages for Silva and restitution for anyone in Oregon who purchased the coconut flavor Cascade Ice in the past year.