Amongst the wide range of beverage types showcased last week at Natural Products Expo East 2017 in Baltimore, Md., drinking vinegar was one with particular momentum. As the nascent category continues to emerge, brands are taking on the challenge of merchandising at retail as they seek to establish a place on-shelf where their products can thrive.

Austin, Texas-based Live Beverages has focused its product development on creating kombuchas and drinking vinegars that appeal to soft drink consumers seeking a healthier alternative, with flavors like cola, root beer, and orange. In formulating its four-SKU line of drinking vinegars, made with a combination of apple cider and coconut vinegars, the company has positioned itself to be approachable and inviting to a mass audience, a philosophy that extends to merchandising. At Expo East, Live Beverages CEO Trevor Ross told BevNET that the brand is focusing on merchandising its cold-chain drinking vinegars and kombuchas together in grab-and-go coolers, aiming for maximum visibility and turns. 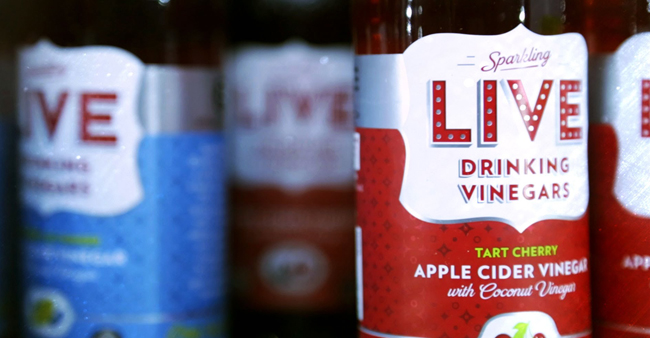 “Drinking vinegars are where kombucha was eight years ago,” said Ross. He noted that, as kombucha has developed and taken up more valuable real estate in beverage coolers at grocery, that hasn’t translated immediately into more space for drinking vinegars. As such, Live looks to position both products together at retail, creating what Ross called a cohesive “big brand billboard” on shelf while underscoring the difference between the two lines through slight distinctions in package labeling. At Expo, the brand showcased a new design for its kombucha line that emphasized the soda-style flavors and that is clearly distinguishable from the drinking vinegars.

In both cases, Live’s approach is to focus on approachable flavor profiles rather than functionality, a position that has long-term potential outside of the natural grocery channel in which the category has thus far established its foothold. Ross noted that conventional grocers are showing an increased interest in the category.

“It’s symptomatic of the way organic products are growing in conventional retailers that they are more open to options like this,” he said.

In the Hot Products section at Expo East, Vermont Village showcased its new family of drinking vinegar products, each designed to capture a different use occasion, price point and position on-shelf at retailers. The brand’s Drinking Vinegars, available in Lime Ginger and Lemon Mint flavors and packaged in 14 oz. glass bottles, are geared at retail towards consumers looking for on-the-go refreshment in the grab-and-go cooler. Its Sipping Vinegars offer a simpler proposition: each variety in the four-SKU line is made with just three ingredients — apple cider vinegar, organic honey and either ginger, blueberries, cranberries or turmeric. Company sales manager Jonathan Lawrence said the line would be merchandised with other vinegars on ambient shelves, underscoring its versatility as either a wellness tonic or an ingredient for cooking. 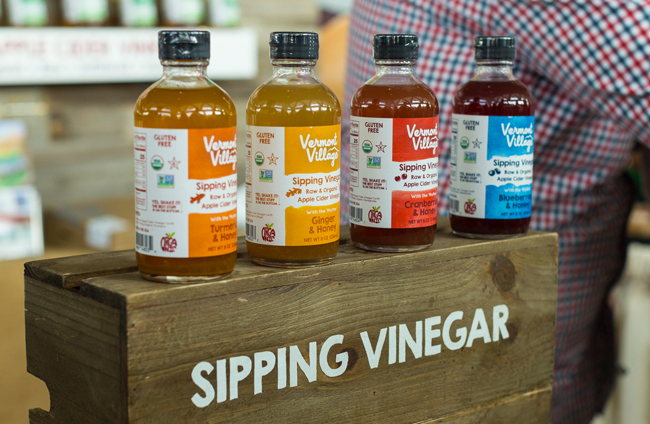 Furthermore, Vermont Village’s new Vinegar Shots line presents all four varieties of Sipping Vinegars, plus a high potency Double Shot, in a convenient single serving pouch that are designed to be featured near point of purchase in stores. Each contain two tablespoons of apple cider vinegar per pouch and will retail for $1.29.

“Retailers are starting to ‘get’ drinking vinegars now,” said Lawrence, who added that the Vinegar Shots would also be available in stores like Wegmans and GNC. “Mainstream grocery chains have an idea of what to do with it when they get it.”

While some drinking vinegar brands are seeking to bring new consumers into the category by moving to high velocity areas within stores and emphasizing refreshing flavors, others are framing their products as more functional propositions. Iris Kim, marketing and sales coordinator for Vitox Vinegar, which markets a line of apple cider-based drinking vinegars made with cold-pressed juices, told BevNET that the brand’s 12 oz. concentrates could fit into the health and wellness set at stores, where its functional qualities would be highlighted. The company also makes 2 oz. probiotic shots, which are often merchandised near point-of-sale displays. For its first entry into the RTD market, Vitox showcased its line of pre-diluted drinking vinegars in 6 oz. bottles, which Kim said would be placed in refrigerated coolers as a convenience play. The line is currently rolling out at retailers like Whole Foods and Sprouts. 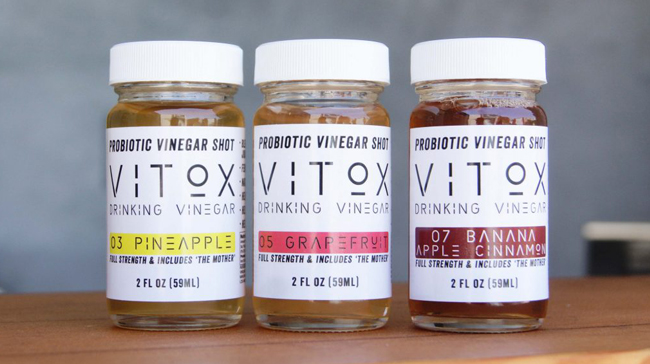 Fire Cider, meanwhile, has never wavered from positioning itself as a wellness tonic, though a versatile one. Vice president of business development Kimberly Allardyce told BevNET that, in addition to being available in the health section at grocery and at nutrition-focused retailers like GNC, Fire Cider was also being incorporated onto shelves next to other specialty vinegars. The brand has also found some success as a behind-the-bar ingredient at juice bars and cafes, where it is incorporated into other types of drinks.

Farmhouse Culture’s Gut Shot and Gut Punch lines are not technically drinking vinegars, but the drinks play in a similar space within the broader fermented beverage category. The Gut Shot line, made with ingredients like kimchi and sauerkraut, started out being merchandised near commodity sauerkraut products at retailers, a position that framed them as a more expensive offering, noted Farmhouse Culture VP of sales Greg Intlekofer. Since then, the 16 oz. multi-serve bottles of Gut Shot have moved to the cooler set at some Whole Foods, creating a stronger distinction for a product that plays in several areas.

Meanwhile, Gut Punch, a sparkling probiotic fermented veggie drink, is proving to be an effective bridge towards the conventional grocery space. At retailers such as Safeway, Intlekofer said the product was positioned near the produce section, noting that there’s still limited room inside grab-and-go coolers for fermented beverages at the time.