Every March, natural product companies from across the United States converge at the Anaheim Convention Center in Anaheim, Calif., for Natural Products Expo West, one of the food and beverage industry’s biggest trade shows. From fresh takes on familiar favorites to disruptive innovations with the potential to create entirely new categories, the annual Expo is where industry professionals get their first glimpse of the products that will fuel the conversation for the next 12 months and beyond. The BevNET editorial team was on the ground in force to cover the latest trends, products, brands, formats and categories that emerged from Expo West 2017.

For a beverage with over a century of tradition behind it, one might think that kombucha may have settled into a degree of predictability. Instead, the brewers showcasing their products at Expo West proved that kombucha remains one of the most dynamic and distinctive categories in beverage today, offering a wide variety of flavor profiles, ingredient combinations and production techniques. 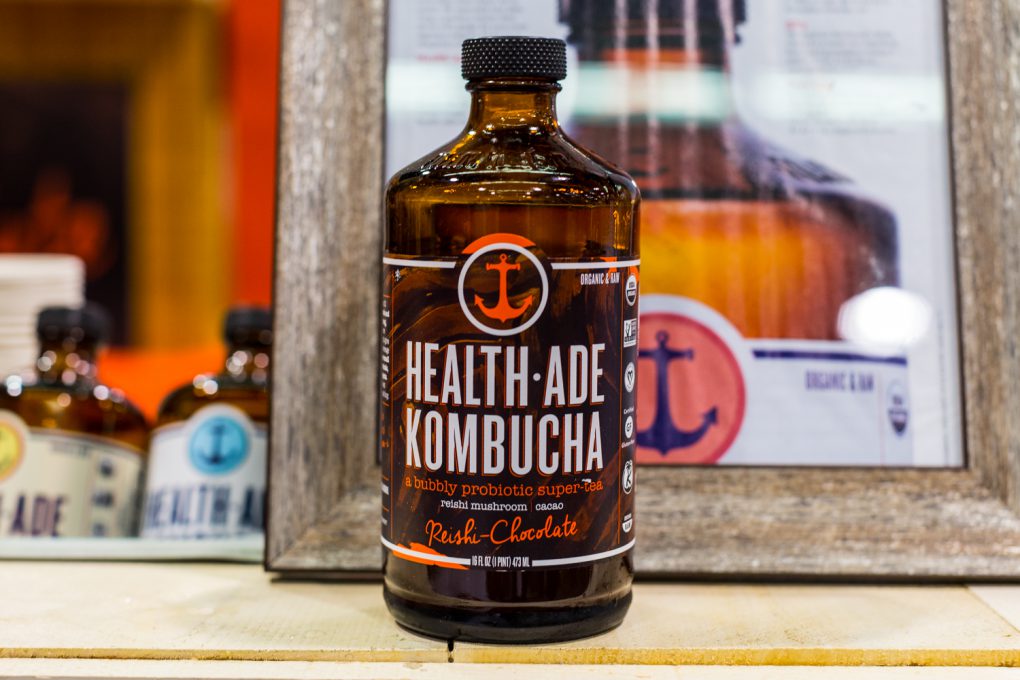 Drinking vinegars were also a notable category at Expo West, as brands sought to bring more consumers into the category with formulations aimed at being more palatable to the mainstream. That’s the idea behind Suja’s new organic coconut vinegar-based drinks, available in flavors like Grapefruit Jalapeno and Ginger Turmeric, as well as BluePrint Organic’s reformulated Daily Apple Cider Vinegar line, which are made with cold-pressed juices. For those seeking to get their servings of vinegar down as fast as possible, new shots from Kor (“Gut Check”) and Vitox each contain a daily serving of vinegar in a compact format. Meanwhile, N.J.-based switchel brand Cide Road teased a forthcoming sparkling variety called Spritzel for launch in May.

Spurred by the consumer embrace of cold brew coffee, some tea companies have begun to innovate with the brewing method. Ito En debuted its introductory two cold brew tea products for each of its Matcha Love and Teas’ Tea lines at the show. The launch accompanied a new social media campaign for Matcha Love that has helped the company focus on marketing to women. 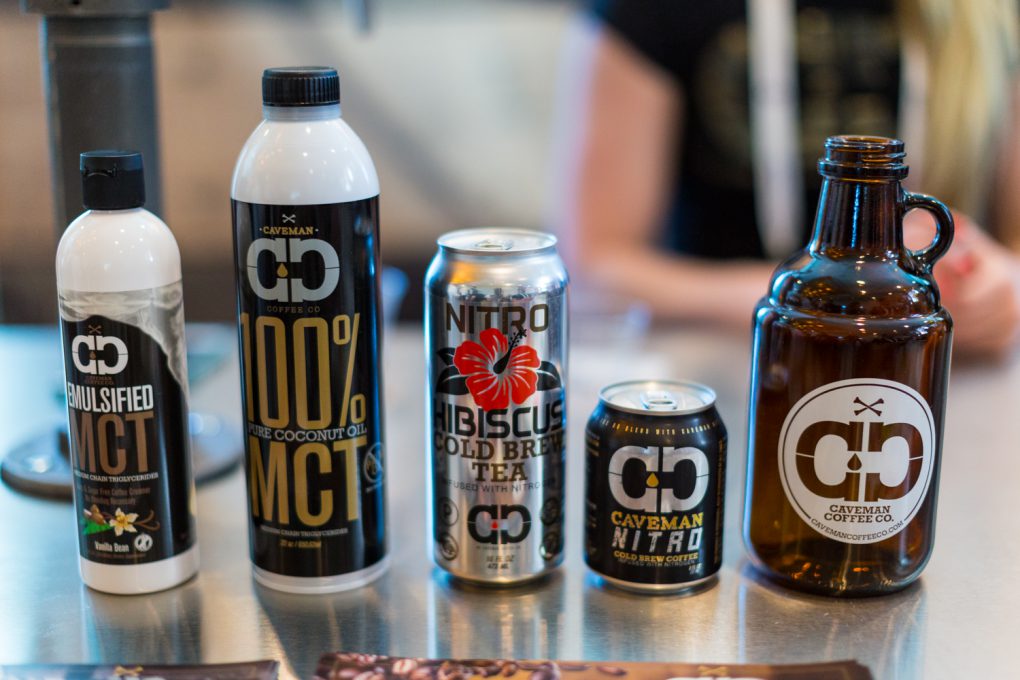 Functional ingredients were also on display among tea exhibitors. The adaptogenic herb ashwagandha appeared in several tea products on the show floor, including new products from Sherpa Power and Inko’s Blue Buddha line.

Meanwhile, Teapigs announced it is discontinuing its RTD matcha line with a possible relaunch set for next year. The company also announced a new set of three morning, afternoon, and bedtime teas meant to be consumed separately throughout the day. 10th Avenue Tea presented an innovative new powdered tea line, selling 45 servings in portable bottles with salt shaker-style caps.

Already one of the dominant trends in beverage going into Expo West 2017, probiotics were virtually everywhere at this year’s event, with brands showcasing them as both as a focus of new products and as an added ingredient to existing drinks.

Sparkling probiotic drinks were particularly plentiful at the show.. Along with new probiotic drinkable soups, organic beverage brand Pressery showcased a complete sparkling prebiotic drink line that will replace its still variety. Lifeway, best known for its yogurts and kefirs, debuted its first non-dairy beverage, a line of fruit-flavored, organic probiotic sodas called Lifeway Elixir. As a complement to its more savory Gut Shot drinks, Farmhouse Culture introduced a three-SKU line of fizzy, stevia-sweetened probiotic drinks called Gut Punch. San Diego-based cold-pressed juicery Solti had a ginger probiotic soda as well, but it will only be available on draft for on-premise service. Playing in the same space, several water kefirs were also featured, including The Water Kefir People, who infuse their products with fruits and botanicals. 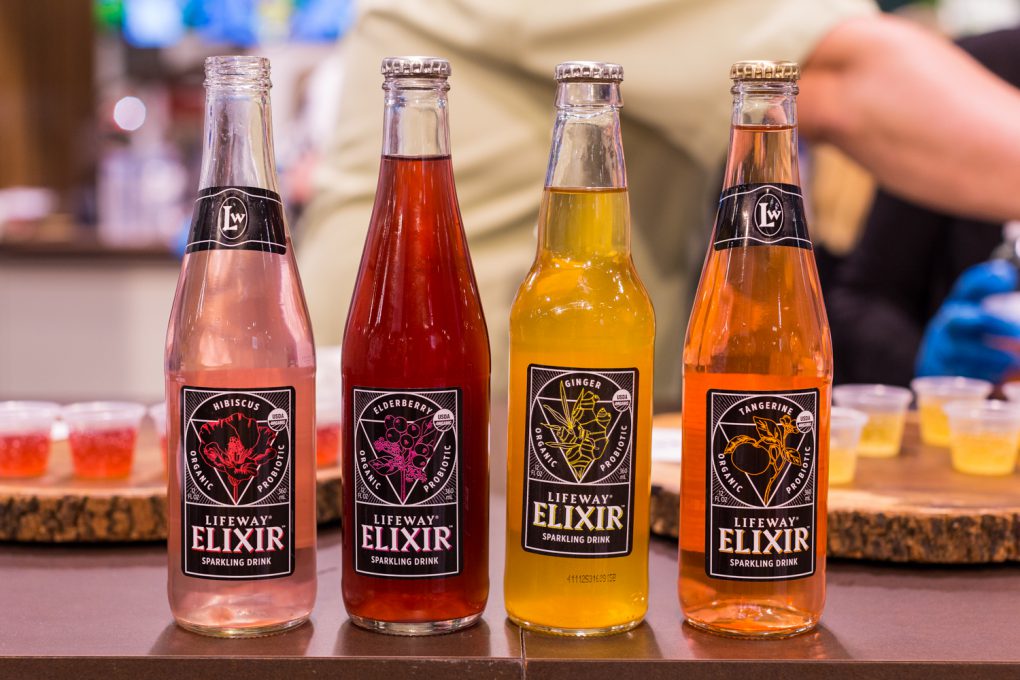 Probiotics were also favored by beverage brands looking to add a functional enhancement to their products. Seeking to give younger consumers a more dynamic range of options, Uncle Matt’s Organics rolled out a pair of probiotic innovations: Orange Defense, made with turmeric and 100 percent orange juice, and Orange Hydrate, formulated with coconut water. Harvest Soul, makers of organic, high-pressure processed juice blends, also got in on the act with a new probiotic SKU called Pro Greens. Karma, known for its proprietary Push Cap bottle, displayed three new flavors to its line of probiotic drink line.. Coconut water brand Invo also picked up on the trend, integrating probiotics into several SKUs of its just-launched Coco Collisions line.

Cold brew is well into its experimental phase with nitros, lattes, and alternative brewing formats abounding at Expo West as brands continue to innovate and differentiate in an increasingly crowded market. 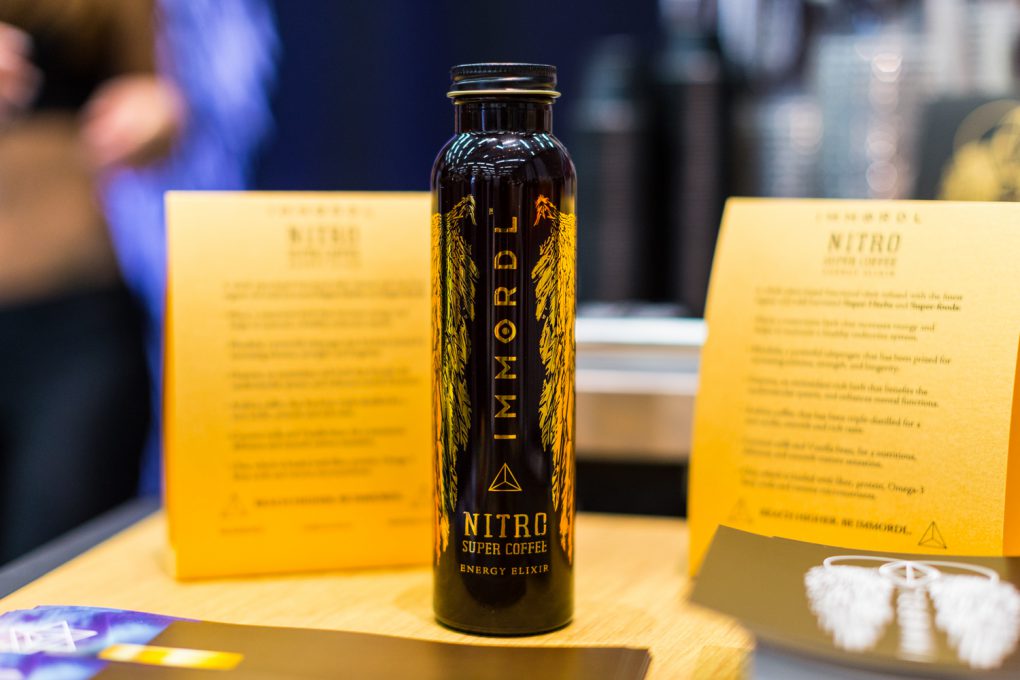 Other brands are focusing on function. IMMORDL, which processes its coffees with a hybrid of HPP and aseptic equipment, presented itself as a premium “super coffee elixir.” At their booth, weightlifter brand ambassadors promoted the drinks as both workout and anytime beverages. Caveman Coffee, co-founded by two mixed martial arts fighters, presents a clean and highly caffeinated nitro cold brew infused with coconut oil-derived MCT proteins. With Bulletproof leading the way, butter or other fat-infused coffees continue to break into the market. Sunniva Super Coffee and Picnik, which rebranded from Blue Northern showcased their lines of paleo-friendly brews. Meanwhile, instant butter coffee mixer Coffee Blocks is working on a new crowdfunding campaign to develop new products.

Having broken down barriers for acceptance of plant-based waters as a category unto itself, coconut water continues to evolve both as a stand-alone product and as a base for other drinks. Brands like Obrigado and Blue Monkey introduced new tropical fruit-inspired flavors, with the latter also unveiling a sparkling variety and a bold glass bottle design that aims to boost the brand’s presence in food service. Coconut water’s versatility and familiarity to consumers also made it a natural choice for brands seeking to add something different to their own products; for example, aloe vera drink maker ALO introduced a coconut water with aloe. For a truly bold approach, Invo’s new line of coconut water-based blends called Coco Collisions offers six SKUs, each with a different functional call-out, that incorporate ingredients as diverse as cayenne, turmeric, mango, beets and kale. 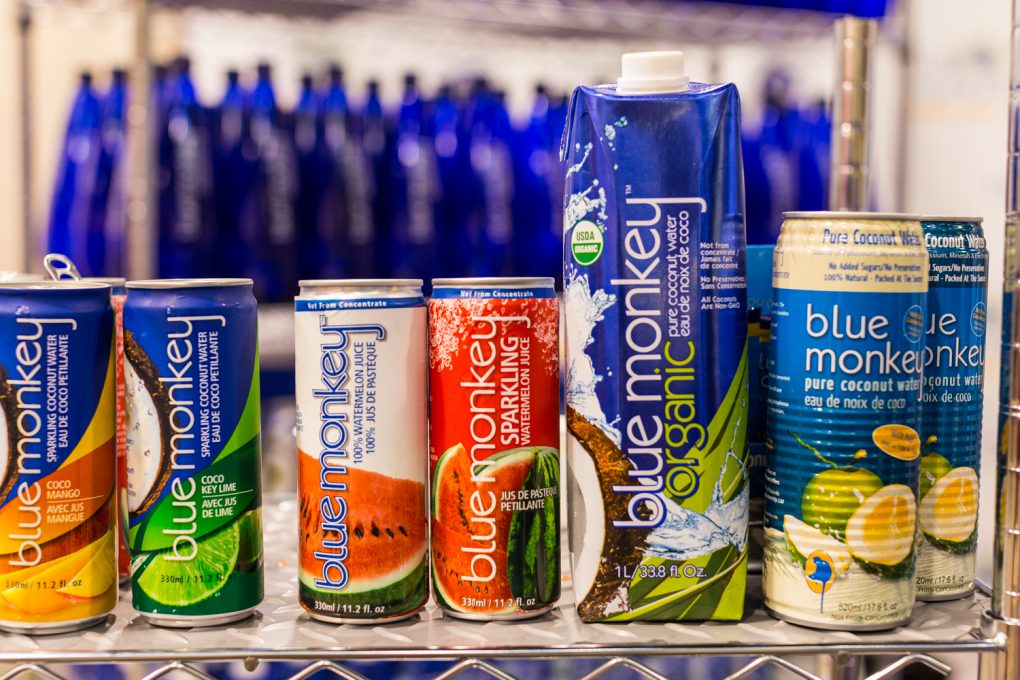 Yet Expo West 2017 showed that the plant-based waters have room to grow beyond coconuts. WTRMLN WTR, one of the category’s more notable recent success stories, expanded with the addition of four new blended products, made with ginger, lime, cherry or lemon. The Maple Guild showcased a new version of its maple water, available in three fruit-based varieties and enhanced with electrolytes and B-vitamins. Meanwhile, Hemp2O displayed a new zero-calorie version as the next addition to what it hopes will be a robust brand platform. Having launched at last year’s Expo West, chlorophyll water brand Verday marked the occasion by unveiling its new Blueberry flavor, bringing its number of SKUs to five. And as an indicator that the plant-based water space still has further room to explore, alkaline water brand BLK revealed BANU, an organic bamboo leaf-based water with zero calories and zero sugar.

In a blooming dairy alternative category, companies continue to innovate and expand even as they struggle to define a standard of identity. With alt-milks in demand, at least one big name is taking its first dive into the category: Vita Coco launched a new coconut milk line, a blend of coconut and water with no added sugar. 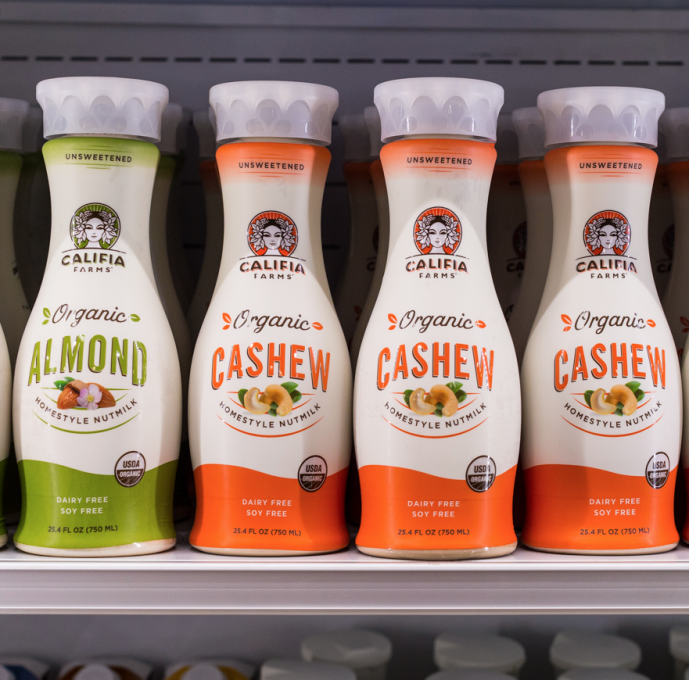 Targeting a sleepy dairy case, a number of brands introduced new multi-serve offerings. Califia Farms launched its first line of organic products, Homestyle Nutmilks, sold in 750 mL bottles. The company also debuted a Toasted Oats ‘N Almond Almondmilk variety and Go Coconuts, a blend of coconut milk and coconut water, each packaged in 48 oz. bottles. Forager launched a new line of organic cashew milks in 48 oz. bottles that are available in four varieties. The company recently swapped HPP for pasteurization for all of its plant-based milk offerings. Bolthouse Farms was also in the mix with a new line of plant-based milks formulated with 10g of plant-based protein. Packaged in 48 oz. carafe-style bottles, the products will launch this summer.

Barista blends are one of the top items coming from alt-milk leaders and startups, with Califia Farms, New Barn, and Milkadamia among the many to appeal to the cafe demographic. Oatly, a European brand that leads dairy alternative milks across the Atlantic, is also debuting in the U.S. with a barista blend as it seeks to make its oat milk a viable contender in a field currently dominated by almonds. Ripple, known for its engineered pea-protein based alt-milk, launched a half & half creamer, which achieves a creamy mouthfeel through natural fats. The brand also unveiled a new kids line. Packaged in 8 oz. cartons, it will launch at Target in April. 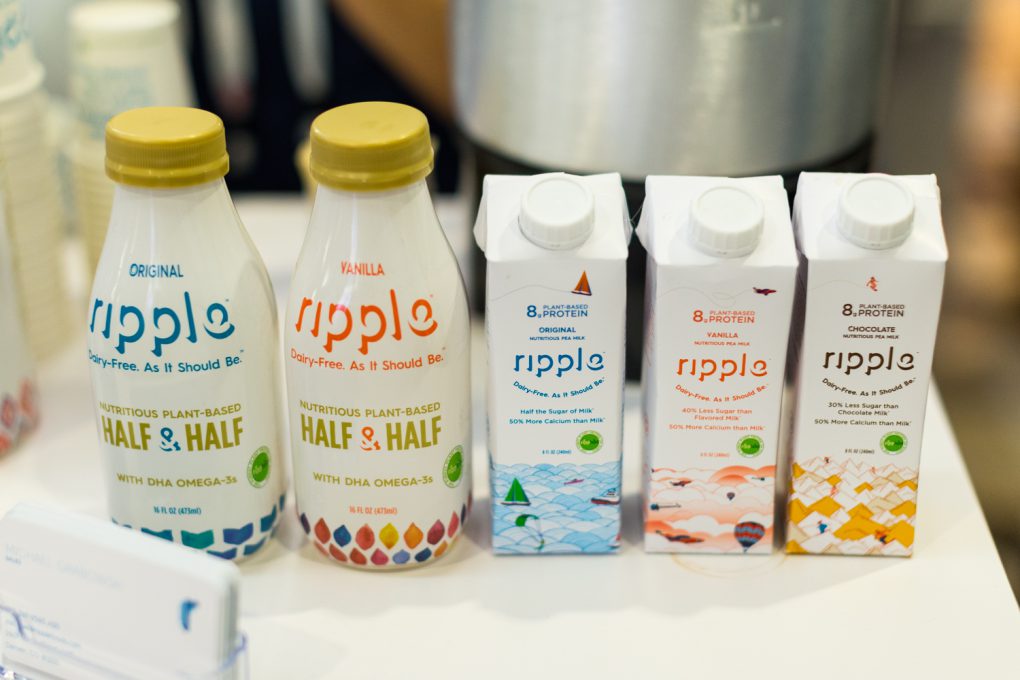 While a lack of protein has long been a common problem with almond milks, more brands are stepping up to the plate. WhiteWave released a new Almond and Cashewmilk with pea protein under its Silk line boasting 10g of protein per serving. Canadian brand Veggemo, which makes its U.S. debut this year, boasts 6g of protein from peas as well, in addition to using tapioca and potato to recreate a milky mouthfeel.

From cold pressing to high-pressure processing, juice has been long been a category that embraces bold innovation, a trend that continued at Expo West 2017.

Though the name may seem curious at first, Harvest Soul’s new line of organic “chewable juice” blends offers a unique textural experience with the addition of bits of seeds, nuts and berries that give it a more fibrous mouthfeel. Similarly rich and nourishing, Evolution Fresh unveiled a four-SKU line of organic, coconut milk-based, superfood-boosted smoothies featuring ingredients like turmeric, ginger, baobab and cocoa. The “Superfoods” line stood in contrast to the brand’s new Coolers line. The a refreshment-focused juice blends are made with a base of cold-pressed watermelon juice and cold brewed tea. Daily Greens, meanwhile, kept things simple with its new two-ingredient fruit and veggie juice blends. Naked also extended its line of cold-pressed, high-pressure processed juices with two botanical-infused varieties: Apples to Lavender and Citrus Lemongrass. 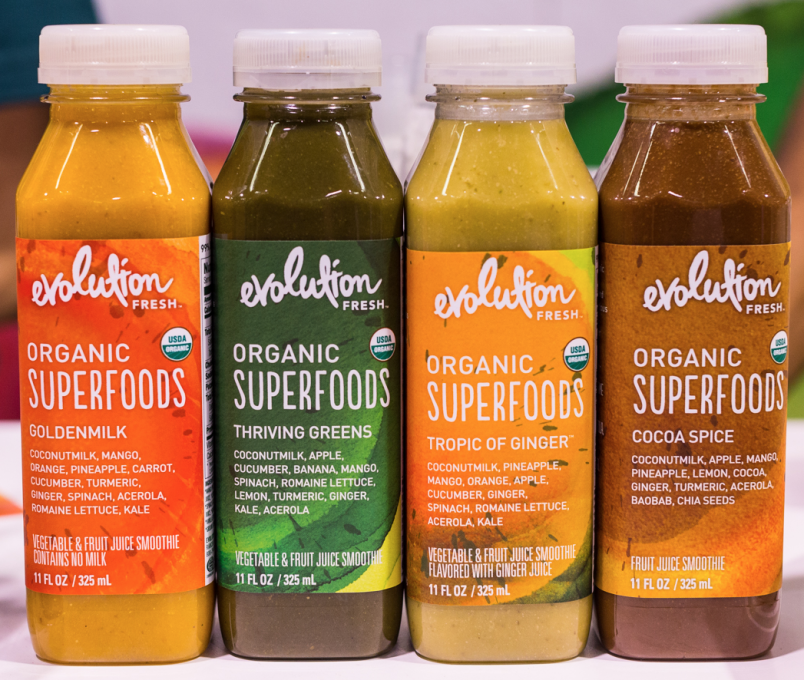 Shots have proven to be an increasingly popular format for juice products as of late. Juice Served Here’s new Hot Shot and Turmeric Shot are both cold-pressed, high-pressure processed juice blends in 2 oz. bottles that offer a big kick in a small package, with the added boost of functionality. Meanwhile, KOR, one of the format’s early adopters, continues to expand its offerings with three new cold-pressed blends in 1.7 oz bottles. Vive Organic also extended its line of “Wellness Shots,” with three new function-forward varieties: Super Antioxidant, Wellness Rescue and Natural Energizer.

Among a flood of new yogurt drinks — including drinkable skyrs from Siggi’s and new shakes from Stonyfield Farm — yogurt brand Dreaming Cow expanded into the drinkable category with its new vegetable-heavy Lush line. With a grass-fed yogurt base, the nutritional beverages feature protein and probiotics and can serve as grab-and-go meal replacements. Dreaming Cow CEO Kyle Wehner said the line exemplified flexibility for consumers. Siggis also came out with a new 8 oz. drinkable whole milk yogurt line, offering a smaller option more suitable for snacking. 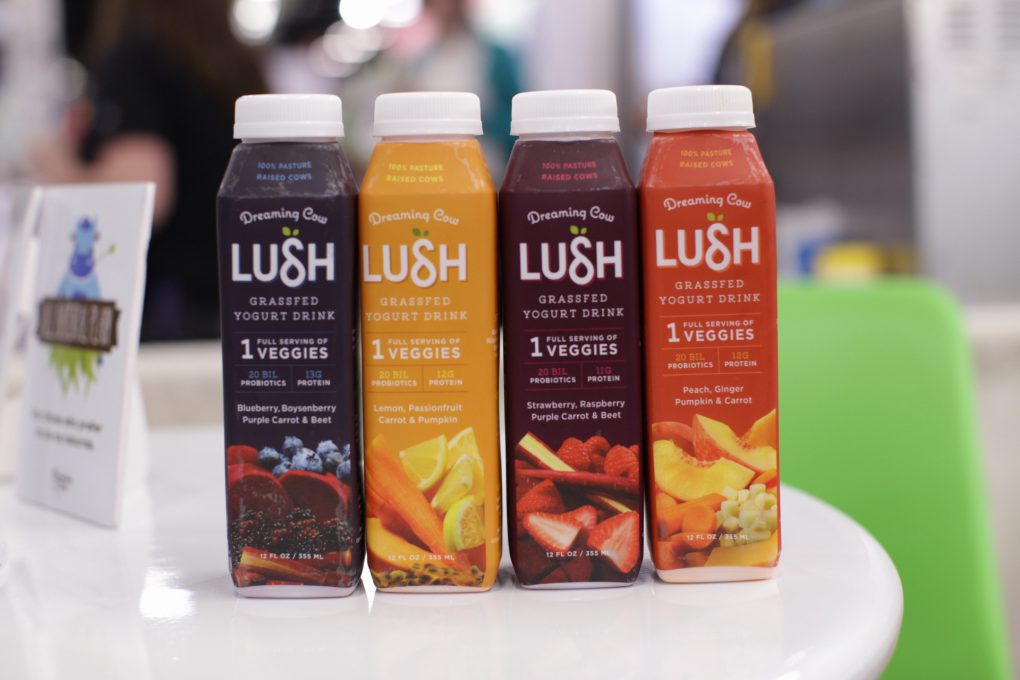