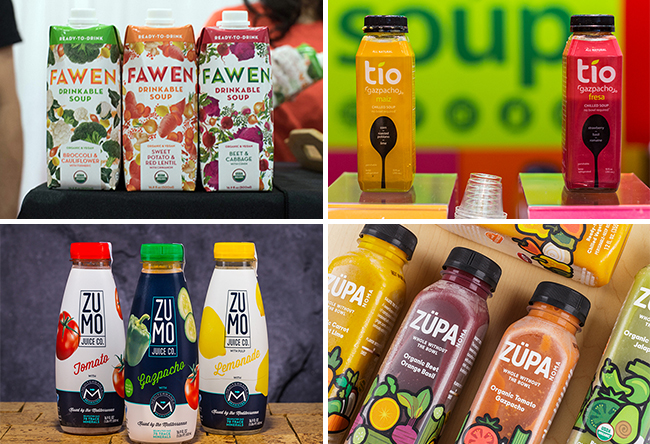 As consumers continue to seek convenience, nutrition, and satiation from their beverages, drinkable soup and yogurt brands are seeing opportunity in marketing their products as meal replacement drinks or in-between meal snacks. At the 2017 Summer Fancy Food Show, upstart and established brands in both categories made plays for a growing number of consumers that are looking for a healthy grab-and-go drink that will fill them up or tide them over until the next meal.

When Austin Allan launched drinkable soup brand Tio Gazpacho in 2014, it seemed he had a big hurdle ahead of him to woo consumers. Cold soups tend to be a more niche product in the U.S., but bottling chunky gazpacho to be sipped is what made the brand’s premiere a true “they said I was crazy” moment.

Indeed, at the 2017 Summer Fancy Food Show Allan recalled the odd reaction his brand garnered at first. But now, three years later, Tio Gazpacho has picked up investment from General Mills and found its distribution expanding across the country, most recently netting deals for placement in New York City airports.

Since Tio Gazpacho’s launch, several other brands have gotten in on the drinkable soup train, adding their own twists and takes to the unique new category. Zupa Noma, which launched last summer on the West Coast is now expanding eastward. Fawen, which launched in New York in January, is presenting its soups as a low-sugar, natural product. And Seawater Food & Beverage has released a seawater-based drinkable gazpacho under its ZUMO Juice Co. label.

Allan said he’s excited about the new brands on the market, as the competition is contributing to the creation of a new category. And it’s a category with potential, as entrepreneurs view the drinkable soups as highly versatile, filling numerous needs and use occasions; as breakfast, lunch, dinner, a snack, or a meal complement.

“The juice category is so mature now, I think this is just a natural evolution out of that,” said Jennifer Berliner, vice president of marketing for Zupa Noma. “We see that at our demos.”

According to Berliner, many consumers who have come to rely on better-for-you drinks like cold-pressed juice are still learning about the often high sugar count of the beverages. As a result, Zupa Noma, which promotes its drinkable soups as snacks or meal complements, has also made gains by presenting the products as low-calorie, low-sugar juice alternatives.

Like Allan, Zupa Noma is still working on the consumer education component, and finds that consumers will often brace themselves before trying the product, expecting something foul-but-healthy, only to find that they in fact enjoy the drink.

“People often are surprised because I think they’re used to sacrificing taste with many products on the market today, but they’ll say ‘wow, this actually tastes good,’” Allan said. “It’s designed to taste good! But consumers are used to things that are low quality, or pasteurized, or have added junk and chemicals.”

At the Fancy Food Show, Zupa Noma unveiled new packaging with callouts indicating that the beverages are “ready-to-enjoy” and offer a pleasurable drinking experience.

Fawen, co-founded by CMO Amanda Bowen and CEO Fabio Fossati, also sees its soups as best consumed as snacks or light meals. However, Bowen suggests that consumers can and should get creative with the products, which currently offers a flavor line including Broccoli and Cauliflower, Sweet Potato and Red Lentil, and Beet and Cabbage.

“There’s so many interesting ways to use it, because the flavor is mild but it has a nice spice,” Bowen said. “In one bottle you could have four different uses. You could drink it as a snack. You could use it as a base and add some broccoli and quinoa and make it into a more hearty, traditional soup. You can take it with you in the middle of a meeting and drink it without utensils. You could make a smoothie. Children like it, it could be a baby food.”

For Tio Gazpacho, Allan sees the drinkable gazpachos better positioned as a meal, something consumers have taken to. Many shoppers, he said, will stock up for the week on Tio Gazpacho and other meal replacement beverages. Likewise, the demographics are diverse, attracting everybody from moms to office workers to senior citizens.

While drinkable yogurts have long been a big business overseas, the rise of single-serve cups of traditional and Greek yogurts in the U.S. kept the beverages at bay. That’s changing, and the segment is now gaining some traction domestically as drinkable yogurt brands tap into rising demand for snackable beverages and meal replacement drinks.

Carlos Ramirez, the founder and CEO of Powerful Yogurt, said the sharp rise in popularity for Greek yogurt was a contributor into drinkable versions never taking off in the U.S. But today, as consumers increasingly seek on-the-go meal replacements, Powerful Yogurt and other drinkable yogurt makers are attempting to meet demand with healthy, affordable options.

Powerful’s drinkable yogurts contain 20g of protein, which has helped appeal to athletic consumers looking for pre-workout and recovery beverages. The products retail for $2.49-$3.49 per 12 oz. bottle.

Although not represented at the Fancy Food Show, Greek yogurt giant Chobani also markets a line of drinkable yogurts, which it launched last year. Like Powerful, the company promotes the high protein content and convenience of the beverages, calling them an “easy-to-drink option perfect to take on-the-go.”

Culture: An American Yogurt Company makes a line of drinkable yogurts that contain 15g of protein and are also formulated with probiotics. Owner and founder Jenny Ammirati told BevNET that Culture’s consumers typically drink the yogurt as a meal, often breakfast or lunch, citing its portability as one major driver.

Moms and kids, Ammirati said, are the company’s top demographic, but that the consumer base runs “the full gamut” from infants to seniors.

Siggi Hilmarsson, the founder and CEO of Icelandic-style yogurt brand Siggi’s, said that drinkable yogurts have long been a popular breakfast item in many European countries, where consumers will pour the beverage over their cereal instead of milk. But cultural differences have led dairy companies to position drinkables as a convenience play.

“It fills you up, you feel full and satiated, plus you don’t need a spoon,” Hilmarsson told BevNET.

Siggi’s drinkable yogurt comes in multi-serve and single-serve formats, the latter of which launched this year and sold nationally at Starbucks cafes. Hilmarsson said that sales of the multi-serve products have been “very steady” for the past several years, with year-over-year growth in the low double-digits.

“It’s had a longer history in Europe, so it’s odd it hasn’t done more in the U.S.,” he said. “But there’s a steady uptick, I think it’s going to do more.”