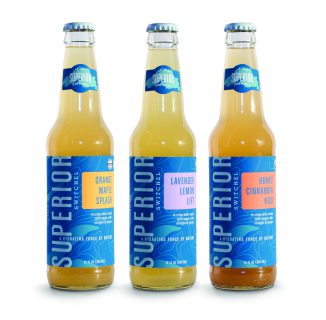 MINNEAPOLIS — Superior Switchel Company is making a splash this fall with a new 12-ounce glass bottle and a complete rebranding.

In stores since 2015, Superior Switchel has made a name for itself as a best-in-class functional health beverage for an active, busy lifestyle. Now, packaged in a taller, narrow-mouth bottle, it offers improved portability, shelf utility, and usability behind the bar, as well as a significant price reduction to consumers.

The new branding also distinguishes Superior Switchel from competitors, reinforcing the company’s Great Lakes roots and distilling the product’s unique ability to refresh and replenish with the tagline “a hydrating force of nature.”

“We partnered with ThinkDesign Group to help us create an energetic, forward-thinking and responsible brand that reflects the history behind our switchel and highlights our sustainability efforts,” said Superior Switchel Company founder and CEO Melina Lamer.

Superior Switchel supports the Great Lakes and waterway conservation efforts by donating 1% of their annual profits to organizations such as Friends of the Boundary Waters.

The Great Lakes-themed packaging and varied shades of blue express the mission of Superior Switchel. The logo’s focal point is the outline of Lake Superior, an ode to this sacred and inspirational body of freshwater. Each flavor has a newly branded name and each label a new backsplash of color to more easily distinguish and better showcase each unique flavor profile:

Packed with electrolytes and high-quality ingredients including apple cider vinegar, ginger, filtered water and a touch of honey or maple syrup, Superior Switchel is a non-alcoholic, historically American beverage that’s healthy, affordable and convenient. It’s also versatile. You can heat switchel in the winter, pour it over ice in the summer, or mix it into your cocktail of choice when you’re looking to switch things up.

“As a company, we strive to give consumers a better adventure through a better beverage,” said Lamer. “We want Superior Switchel to take you outside to all the places you love and with the people who matter most.”

Currently available in coops and groceries across the Midwest. The new look and bottles will launch in stores in December 2017.

In college, Melina Lamer was looking for a natural alternative to modern-day electrolyte drinks. Her grandma suggested that she try drinking apple cider vinegar, so Melina did some digging and to her surprise, she discovered an old sailor’s recipe for something called “switchel.” It was not only supposed to quench your thirst, but provide a healthy response to inflammation. She brewed her first batch in her dorm room and kept it cold to replenish after her college hockey games. After graduating, she launched the Minneapolis-based Superior Switchel Company in 2015, making it the first switchel business in the Midwest.

Founded in Minnesota in 2015, Superior Switchel is currently available in over 127 retail locations and is rapidly expanding in popularity due to its approachable flavors, versatility and beneficial ingredients. From brewing to adventuring, Superior Switchel believes in crafting beverages that nourish both people and the planet. Fully women owned and operated, the company manages a sustainable supply chain that sources organically from U.S. farmers, and donates 1% of their annual profits to Great Lakes and waterway conservation efforts. Superior Switchel is USDA certified organic, certified vegan, and naturally gluten-free. For more information about Superior Switchel, please visit www.superiorswitchel.com.