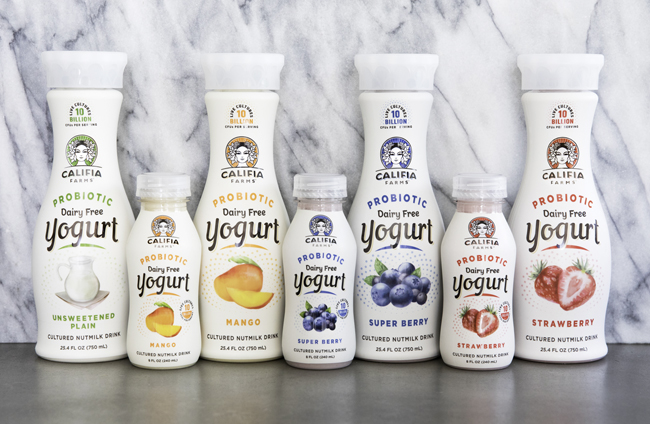 The line, called Yogurt Drinks, will be available in single-serve 8 oz. and multi-serve 25.4 oz. bottles in four varieties: Strawberry, Super Berry, Mango and Unsweetened Plain. Yogurt Drinks are expected to land on store shelves sometime around June, and will have a suggested retail price of $2.69 for the single-serve and $5.49 for the multi-serve format. The entire line is non-GMO certified, gluten free, kosher and free of carrageenan.

In a call with BevNET, Califia Farms CEO Greg Steltenpohl said that the line represents a opportunity to leverage the brand’s core expertise in nut milks and non-dairy beverages to move into a more functional area, which he described as the “long-term direction” of the brand.

The Yogurt Drinks are differentiated by the use of the Califia Culture Blend, which contains 10 billion live and active probiotic colony-forming units (CFUs), including the first vegan version of the bifidobacterium BB-12, which Califia co-developed with European based supplier Chr. Hansen specifically for the line.

Steltenpohl said that developing the line around BB-12, a probiotic strain with multiple clinical trials and peer-reviewed scientific publications backing up its efficacy and functionality, was in part a reaction to the explosion of probiotic-infused products in the marketplace.

“We’ve been pretty annoyed, I guess you could say, and I think the consumer should be annoyed, that the word ‘probiotic’ is being thrown around in a pretty casual, and even in some cases deceptive, way,” he said. “I think the consumer confusion rests also on the ground that they don’t understand the difference between a yogurt culture and a truly functional probiotic that actually performs the use that people think they are getting, which is to improve digestive function and enhance immune response.”

Besides honing in on functionality, Steltenpohl said that Califia saw an opportunity to “crack the code” of making a non-dairy drinkable yogurt that tastes similar to a full-dairy version. Noting that similar products made with almond milk “come across as a little one dimensional,” he explained that Califia spent two and a half years developing the formulation, using its experience and familiarity with blending coconut milk to integrate it into the base for Yogurt Drinks, along with almond milk and oat fiber. Steltenpohl said using coconut also allowed for a reduced sugar profile — at 16 g for the three sweetened flavors — than other drinkable yogurts.

Steltenpohl said Califia will look beyond the natural channel and focus its retail strategy on “progressive retailers” open to expanding their non-dairy and plant-based offerings.

“We are having some great conversations with some surprising bedfellows about this product,” he said. “I think it’s going to have broader appeal than even we may think.”

While the Yogurt Drink line represents another example of Califia’s relentless innovation streak, it also more specifically speaks to the company’s interest in fermented beverages. Steltenpohl revealed that the brand recently made a very large capital investment in technology that can be used to naturally ferment cultured products, and that, besides developing new products, the company will look to improve its messaging around the delivery of efficacious amounts of probiotics and other functional ingredients.

“We were at first a little annoyed when other people got to [non-dairy drinkable yogurts] first,” he said. “But we hope best is better than first in this case.”