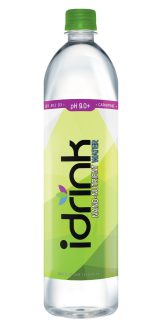 LAS VEGAS — It is official! John Lenore & Co. has signed an exclusive agreement with greenONE Holdings Inc., a Las Vegas based company, to distribute its idrink Nano Nutrient water throughout San Diego.

As a leading distributor for over 50 years, John Lenore & Co. will expand idrink into convenience stores and markets throughout San Diego County. greenONE Holdings CEO, Neil Fineman, is excited about the partnership: “This collaboration is a win/win. John Lenore & Co. is known for introducing the latest product to the marketplace; and, idrink is the only tasteless, odorless, nano nutrient water in the beverage industry. We are eager to offer San Diegans our proprietary nanotechnology, which allows hydration on a cellular level, and look forward to a successful partnership with John Lenore & Co. for years to come.”

John Lenore VP of Sales, Sean Nichols was impressed with the “point of difference” idrink offers. “We get numerous brands knocking on our doors, daily.” idrink has many qualities and functionalities that deliver as advertised. Nichols added that he liked the packaging, being great in taste and loaded with multivitamins, and the way it actually made him feel after drinking one bottle! “I see idrink as a very innovative pkg. with a rock-solid team and marketing plan to bring it all to life.”

idrink COO Nick Pargaz shared CEO Neil Fineman’s sentiments and added: “San Diegans are known for their active lifestyle and will relish the rapid hydration that our nano nutrient water offers.” idrink is the “The Next Generation Water.”

greenONE Holdings, Inc. the creators of idrink, is a Nano nutrient company that developed the world’s first multivitamin water utilizing nanotechnology. idrink is specifically formulated by a team of doctors and scientists who formulated the Nano Nutrients in idrink so that nutrients are rapidly absorbed and are bioavailable to “go to work.” greenONE is a “green company” utilizing natural plant-based vitamins, with zero taste, zero fillers; and, only produces products that are GMO and BPA free. greenONE Holdings is based out of Las Vegas, NV; Nevada Beverage (Budweiser) is its distributor. For more information visit www.idrinkbeverages.com