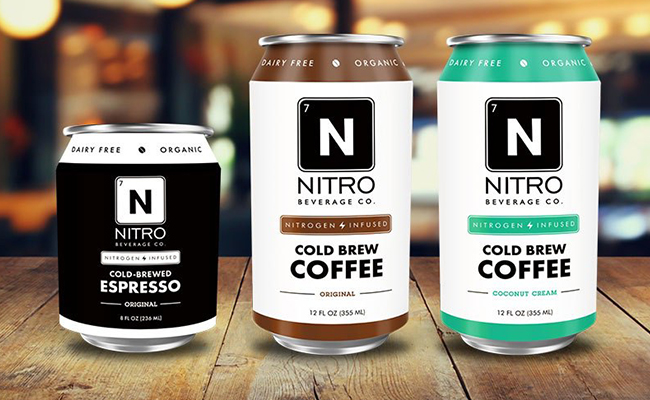 Following its foray into the keg business, Asbury Park, N.J.-based Nitro Beverage Co. will make the leap into cans next month with the release of a three-SKU line of nitrogen-infused organic cold brew coffee.

As its name suggests, Nitro was founded in 2016 around the concept of building a product portfolio of nitrogen-infused beverages, which includes cold brew, kombucha, lemonade and tea. COO Kareem Elhamasy told BevNET that he and his co-founders always had plans to move company into the ready-to-drink (RTD) market, and, after eight months of product development and ongoing upgrades to its production capabilities, it’s ready to start the first production run on April 9.

“We started with kegs just to mess around with different beverages, to see what works and what doesn’t,” he said. “That makes it a lot easier to go into the RTD market.”

Nitro’s canned cold brew line will launch in three dairy-free SKUs: original and coconut cream, packaged in 12 oz. cans, and espresso, which will be in an 8 oz. format. The products are made with organic, Fair Trade certified coffee and will retail for $3.99 each.

Coconut cream is the first of several seasonal flavors added to the RTD line, with toasted almond and pumpkin spice set to follow. Meanwhile, Elhamasy said Nitro’s espresso SKU, which will have nearly double the caffeine of the 12 oz. cold brew, fits well with the recent burst of innovation around the drink.

“We saw there’s so much innovation going on with espresso this year, with the blonde espresso from Starbucks, La Colombe with their cold-pressed espresso,” he said. “We figured we’d take a strong, rich cold brew and the nitrogen effect with that will smoothen it out to make a smooth espresso.”

Elhamasy said Nitro plans to begin rolling out the RTD line to local retailers and into existing keg accounts. The brand is currently on tap at over 50 locations across its home state, as well as in New York and Pennsylvania. For distribution, Nitro has partnered with Lakewood, N.J.-based Seaview Beverage Distributors to service retailers in Ocean, Monmouth and Burlington Counties in east and northeast New Jersey.

Elhamasy cited Seaview’s track record in helping build another Jersey-based brand, Princeton-based Bai, prior to its $1.7 billion acquisition by DPS in 2016. He added that two SKUs, original and espresso, will be available at a 7-Eleven store in Fort Lee, N.J., with the potential to expand into 20 other store locations in the northern New Jersey area.

“We are equally excited to grow it together,” Kareem said. “With all that we are offering it could potentially be bigger than Bai.”

Following the launch of Nitro’s cold brew coffee line, Elhamasy said to expect further innovation in RTD in the near future, including in kombucha.

“To find someone who not only can [package kombucha in cans] but also have the nitro was a little bit ahead of its time,” he said. “But now that more companies are starting to can, I think we’ll be able to do that hopefully within the next year.”