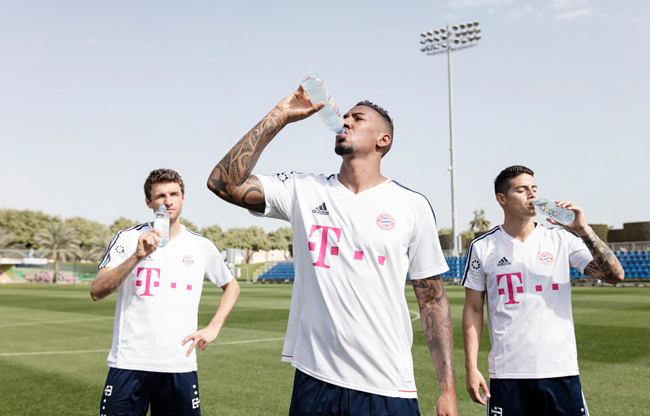 For an established beverage company, a marketing partnership with one of the world’s biggest and most recognized soccer teams would be significant news.

For a self-described “quasi-startup brand” in the business of functional water, it’s a game-changer.

That’s the scenario for Vancouver, Canada-based oxygenated water brand OXiGEN, which in January announced a three-year deal to become the “official functional water and recovery tool” partner for FC Bayern Munich. In teaming with the most successful German soccer club ever and one of the world’s most valuable sports teams — reportedly worth $1.23 billion — the company gained exposure overnight to over 350 million fans worldwide, and was vaulted into a select group of global sponsors that includes Audi, Adidas and Apple Music.

The partnership represents a significant step in advancing OXiGEN’s plans for expanding its global distribution and consumer awareness over the next year, as well as lending credibility to the product’s functional benefits.

“For us to land such a large global deal for effectively a quasi-startup beverage company was a huge coup for us,” said OXiGEN founder and CEO Blair Bentham. The brand, which launched in 2014, is currently sold in the U.S., Mexico and the Middle East, and is set to launch in Japan, China and India over the next 12 months. “OXiGEN is a lifestyle brand, which obviously sport plays a part in, and of course soccer is the world’s sport, so from that perspective it made a huge amount of sense for us.”

The partnership was born through a personal relationship between an OXiGEN shareholder and a FC Bayern executive, who shared the product with the team last summer during the club’s pre-season training in China. After a positive initial response, FC Bayern and OXiGEN began discussing a formal marketing alliance which officially launched during the team’s winter training camp in January in Doha, Qatar.

From a product perspective, the partnership between FC Bayern and OXiGEN brings obvious benefits to each side. In incorporating OXiGEN into the team’s training program, FC Bayern physiotherapists and doctors have another tool, backed by scientific research, that can help players recover faster and improve on-field performance. For OXiGEN, the partnership with of one of European soccer’s elite clubs solidifies the brand’s credentials in the sports realm, one of several areas in which Blair said the company is looking to build relevance.

“OXiGEN is not positioned as a sports beverage, and we are not trying to take on that market,” he said, citing a female consumer-focused marketing partnership with Kathy Ireland Worldwide as an example of the brand’s overall strategy. “From our perspective, having Bayern as a partner on the sports and physical activity side fills massive shoes.” 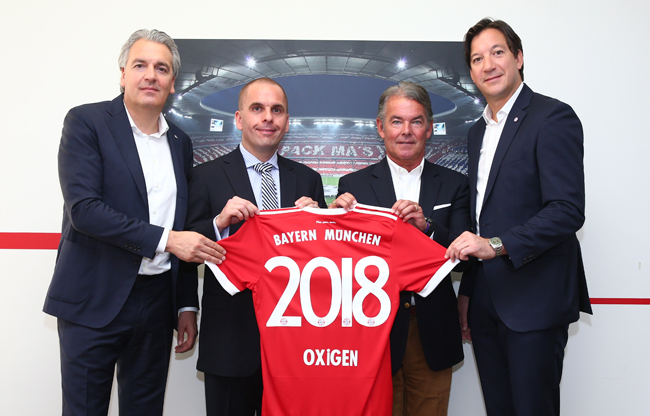 The deal, however, is subject to certain restrictions. FC Bayern already has an official water partner for the German and Central European markets, meaning OXiGEN will not be featured on-site at the team’s home training facilities in German, in the dugout during matches or anywhere in its home stadium, Allianz Arena.

Instead, OXiGEN will be incorporated into club activities, such as first team training sessions and marketing initiatives, outside of FC Bayern’s core market. This could range from product activations to showcasing in-stadium digital signage during international broadcasts of FC Bayern matches.

Rudolf Vidal, the American president of FC Bayern Munich, indicated that there could be an opportunity for OXiGEN to enter the German market at some point in the future, but that the current focus is on finding mutually beneficial international marketing opportunities.

“We are, in the end, a sports club and when it comes to business, what we are going to sell is reach,” he said. “It’s massive with regard to their target, especially when you look at markets like Asia. We have 130 million followers in China, so whenever you do anything there it’s definitely helpful to have a partner like Bayern Munich.”

As a brand partner, OXiGEN will have complete access to FC Bayern’s range of marketing assets, including players, staff and team facilities. Vidal said FC Bayern could potentially participate in product activations for OXiGEN in markets outside of Germany. Along with promoting the affiliation in digital advertising and social media, the FC Bayern logo will be featured on all bottles, as well as point-of-sale assets such as neck hangers and in-store displays. The water brand will also have the ability to bring guests to FC Bayern’s home stadium, Allianz Arena, as they seek to build commercial relationships.

For FC Bayern, the OXiGEN partnership is another platform to grow its own brand. “They distribute this product in markets where we don’t have an office, so that’s a marketing tool for us as well,” said Vidal.

Bentham said that the deal is already having a positive impact on OXiGEN’s growth strategy. He noted that having FC Bayern on board enhances the brand’s credibility in the sports world, particularly with its pending partner in Japan, where the Summer Olympic games will be held in 2020. OXiGEN is also in discussions with distributors in South America, where association with the draw of Bayern’s top stars like Chile’s Arturo Vidal and Colombia’s James Rodriguez could have an impact.

“Because of this partnership, it has allowed us to expedite the timeline of coming to the table as a newer beverage brand with a giant marketing partner on a global stage,” he said, adding that he sees the deal extending beyond the initial three-year contract. “It allows our partners globally to have a big base from a marketing perspective as they roll out the brand in their region.”