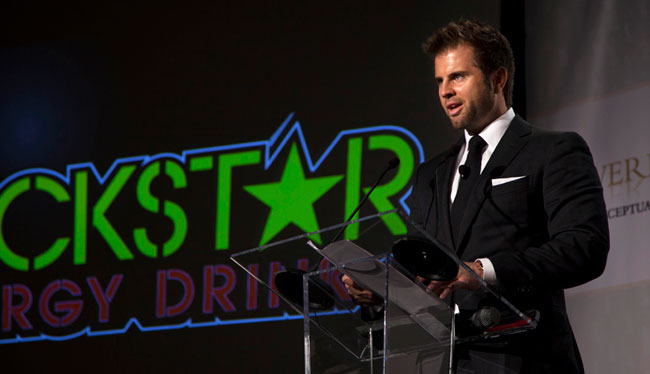 Longtime Rockstar Energy executive vice president of sales and distribution Joey Cannata has announced his departure from the company.

Speaking with BevNET last week, Cannata, who had been with Rockstar for 17 years, explained that he had been contemplating leaving the company for some time, but has no immediate plans for his next career move.

“I just needed a change in my life, that’s what it came down to,” Cannata said. “I didn’t want to be 50 years old and be at the same company for that long of a period. I want to do something else with my life at some point.”

Alongside founder Russ Weiner, Cannata had been an integral part of the small group of staffers who helped build Rockstar from upstart independent to a national brand, with revenues increasing an annual average of 103 percent from 2001 to 2007 to $405 million, according to Forbes. Along with chief rivals Red Bull and Monster Energy, Rockstar helped shape the burgeoning energy drink market during the aughts through a distribution partnership with Coca-Cola Enterprises (CCE) signed in 2005. After the Coca-Cola Company acquired distribution rights for Monster in 2009, Rockstar cancelled its deal with Coke and inked a 10-year distribution partnership with PepsiCo.

While noting the importance of those deals and praising the company’s partners, Cannata reflected on his career at Rockstar and noted his greatest satisfaction was in “proving to a lot of people that the concept of a 16 oz. energy drink that looks like a Guinness can was dead-on.” He recalled early days of building buzz for the brand through off-the-cuff marketing tactics, such as handing out cases of Rockstar to bars and restaurants in Park City, Utah during the Sundance Film Festival, including sneaking product into a Red Bull-sponsored party.

“When you are starting something up, there’s always the excitement of it being new and fresh,” he said. “As companies grow, the management goes to more of keeping things moving along.”

Though he has no imminent career plans, Cannata indicated that his next venture — in beverage or elsewhere — would likely involve a return to his brand-building roots. “What I’m best at is getting a company going and figuring out what needs to get done to get us to that space and get the brand activated,” he said. But besides spending more time working at his family’s wine label, Rocky Hill Vineyards, Cannata says he’s taking a much-needed break from the business.

“What I want to do initially right now is just hit the reset button and take a step back,” he said.

Next-gen water cooler maker Lavit has welcomed former PepsiCo executive Cie Nicholson to the company’s advisory board, according to a press release.

Nicholson is the chief operating officer at Forkcast, a personalized food ordering app. Her previous beverage industry experience includes almost a decade at PepsiCo, starting as director of innovation, food service division in 1997. According to Nicholson’s LinkedIn profile, she left the company in August 2008 after serving as senior vice president and chief marketing officer for nearly three years.

New York-based Lavit, which manufactures a patented, customizable single-serve cold beverage dispenser for office use, was founded in 2011 and is installed in over 1,000 locations across the country. Current brand partners include AriZona Beverages and Juice Press.

“I couldn’t be happier with my involvement with Lavit,” said Nicholson in a press release. “The company is so well positioned to take advantage of the growing trends towards water and better-for-you beverage consumption.

In an email to BevNET, she noted that the drive towards greater personalization and customization of beverages will help fuel growth at Lavit.

“I believe the ability for consumers to craft beverages exactly to their own specifications will drive brand loyalty in ways we may have never seen previously,” Nicholson wrote. “I think that loyalty will be further attached to companies that can deliver their beverage offerings in environmentally efficient ways. Thus, companies with technology to offer personalized beverage experiences that are also eco-friendly at scale will be well positioned going forward.”

Pearson brings a long track record of beverage industry experience to his new role. Before joining Runa, he served as vice president of sales at Boylan Bottling Co. and as regional vice president at Reed’s from 2007 to 2014. Pearson was also a key account manager at PepsiCo from 2001 to 2007, following a nearly four-year stint in the same role at Coca-Cola Enterprises.

“I have known Eddie for a long time and believe Eddie’s his experience managing sales teams, key relationships in the industry, strong understanding of multiple routes to market and extensive experience calling on most channels of distribution is a great fit for Zola to help us achieve our goals,” wrote Zola CEO Chris Cuvelier in an email to BevNET.

In a message posted to the company’s Facebook page on Dec. 17, the company announced Paul Tepperman as its new CEO. The message indicated that the company has “for the first time in a very long time a veteran food & beverage CEO taking over day-to-day management.”

Tepperman takes the helm at Clearly Canadian following a two-year stint as Managing Director at Bacardi Canada. His previous experience includes roles as customer vice president at Mondelez International in Canada and as general manager and head of sales at Kraft Foods Australia.

The Facebook post stated that Tepperman will be working to increase distribution across Canada and the U.S.