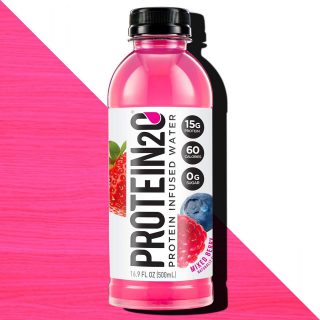 CHICAGO — Protein2o, the nation’s leading low-calorie, low-carb, protein-infused water, is now being distributed to more than 900 Publix stores across the southeast United States.

Beginning in mid-August, Publix will be carrying three flavors (Peach-Mango, Dragonfruit-Blackberry and Kawaiola Coconut) of Protein2o’s new naturally sweetened line of protein waters, which contain 10 grams of whey protein isolate and only 60 calories. The 16.9 oz bottles will be sold in the growing enhanced water aisle of Publix stores across Florida, Georgia, Alabama, South Carolina, Tennessee, North Carolina and Virginia.

“Our momentum is really strong and Publix recognized that,” said Andy Horrow, Protein2o president. “We’re building a committed consumer base thanks to a successful multi-million-dollar marketing investment and the great work by our retail partners who really get behind this brand.

The Chicago-based beverage start-up has had an explosive growth year, landing national distribution at Sam’s Clubs, Walmart, Target and Speedway. Publix, ranked the best supermarket in America, represents a big push south by Protein2o, which already has great supermarket distribution in Safeway-Albertson’s, HyVee, Mariano’s/Pick-n-Save (Kroger), Meijer and Giant Eagle among others.

“Consumers understand the benefits of protein – to help build lean muscle, for exercise recovery and for weight loss,” said Horrow. “Protein2o addresses the demand for protein, but in a delicious, low-calorie water that is a welcome alternative to the common chalky protein shake. Protein2o is a refreshing take on protein.”

Founded in 2013 by former SVP of Merchandising for Walgreens and GNC Bob Kral and his son Robert Kral, a former Johnson and Johnson sales executive, Protein2o is the original and #1 protein water in America (Nielsen). Protein2o comes in nine flavors with 10-15 grams of whey protein isolate and only 60 calories per 16.9 oz. bottle. Protein2o is owned by a group of beverage, finance and retail industry leaders. The company’s chairwoman of the board is Sue Wellington, former Gatorade president. www.drinkprotein20.com.