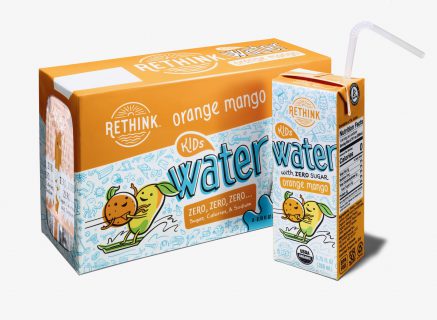 COLUMBIA, Md. — RETHINK Brands, the innovative packaged water company and creators of the sugar-free, flavored water for kids, announces the addition of new flavors to its RETHINK Kids Water lineup, which will launch in tandem with new packaging and branding. Organic Fruit Punch, Organic Strawberry Lemon and Organic Mango will join existing flavors Purified Water, Organic Apple Water and Organic Berry Water, doubling the brand’s range while still promising zero sugar, zero sodium and zero calories. The three new flavors will launch in April and will be available along with existing flavors in over 10,000 stores nationwide, including Walmart, Kroger and Target, with prices ranging from $2.99 – $3.69 for a pack of 8.

In addition to Walmart, Kroger, and Target, RETHINK Kids Water will be sold at other noteworthy banner retailers such as Wegmans, H-E-B, Earth Fare, Roundy’s and Food Lion, and on e-commerce retailers such as Amazon and Jet, reaching consumers nationwide.

RETHINK Brands first aimed to disrupt the bottled water category with its 2016 introduction of RETHINK Water, focused on eliminating the 40 billion plastic bottles that end up in landfills and oceans each year. Last year, realizing there was an underserved market for parents who wanted to give their children a sugar-free drink option, the brand created an entirely new category with the introduction of RETHINK Kids Water. This year, after insatiable demand from customers who want to make smarter and easier choices for their children, RETHINK Kids Water is doubling its flavor offerings and increasing its retail footprint. With juice sales and foot traffic to the supermarket juice aisle in decline, RETHINK Kids Water’s new flavors, and new packaging — colorful, fun, and eye-catching — are in line with the company’s forecasted 2018 growth of 150% and mission to change the way consumers, especially families, think about water.

“When we launched RETHINK Kids Water last year, our goal was to fill a real void in the beverage industry, and we achieved that by creating a sugar-free juice alternative for kids,” said Matt Swanson, co-founder and CEO of RETHINK Brands. “As we continue to listen to our customers and evolve as a brand, introducing new flavors and newly designed packaging, is the next step in that evolution. More and more consumers are choosing water as their drink of choice, and we’re thrilled to be part of that change.”

Packaged in a traditional juice box with a straw, RETHINK Kids Water lineup is familiar to kids and parents, but is anything but the usual kid-friendly drink. Focused on encouraging healthy eating and drink habits among children, RETHINK Kids Water is a Whole 30-approved, tasty alternative to bottled water or sugary juice that parents can trust, pack for lunches, give for after-school snacks and bring for fun day trips.

Founded in 2016, RETHINK Brands is a solution based beverage company focused on optimizing water, the products of our everyday life. We feel positive change comes most quickly when challenging the status quo with simple improvements. In short, by RETHINKing what we have today, we will eliminate the problems of tomorrow. RETHINK Brands has corporate headquarters in Columbia, Maryland, and is available in more than 10,000 stores, including CVS, Wegmans and Target.