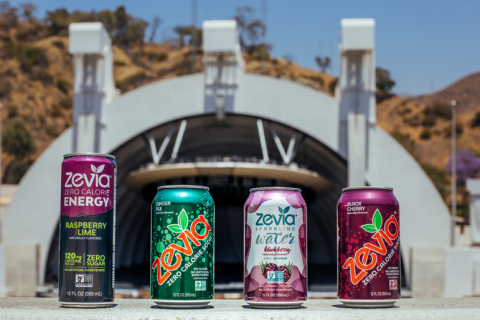 LOS ANGELES – The same venue that has hosted The Beatles, Rod Stewart, The Rolling Stones, and is currently the summer home of the Los Angeles Philharmonic has a new headliner: Zevia. Today, Zevia announced a five-year partnership as the official zero-calorie, naturally sweetened beverage brand of the Hollywood Bowl. The LA-based beverage brand will offer a selection of their sugar-free sodas, energy drinks and sparkling water, starting with the July 4th Fireworks Spectacular concert with The Go-Go’s.

This is the first time the Hollywood Bowl will be carrying a stevia-sweetened, zero-calorie soft drink in its 97 seasons. Zevia will be available at all marketplaces within the venue, allowing attendees to enjoy sugar-free flavors such as Ginger Ale and Black Cherry Soda, Blackberry Sparkling Water and Raspberry Lime Energy. The partnership will include on-site and exit sampling, along with branding throughout the venue.

“It’s an incredible honor to have Zevia beverages featured at the Hollywood Bowl, a venue that’s held so many special memories for Angelenos and visitors,” said Zevia CEO Paddy Spence. “Consumers want food and beverage options that they can feel good about giving to their family and friends, and that extends to a night at a concert or sporting event. Zevia’s zero calorie, zero sugar products are a perfect complement to a night at one of America’s most incredible music venues.”

The brand recently expanded its portfolio of beverages with the announcement of the first organic, zero calorie, naturally sweetened tea line, which will be available in stores and online this October. The Hollywood Bowl’s partnership with Zevia was facilitated by Santa Monica-based sponsorship agency Premier Partnerships.

Zevia is the first beverage brand exclusively focused on naturally sweetened, zero calorie beverages, including Soda, Energy, Sparking Water, Ready-To-Drink Tea and Mixers lines. With formulas that are Non-GMO Project Verified, Vegan, Kosher, color-free and Gluten Free, Zevia is sold at more than 40,000 grocery, natural and specialty food stores in the United States and Canada, including Whole Foods Market, Sprouts Farmers Markets, Safeway, Kroger, Target and Amazon. You can find us at Zevia.com and @Zevia on Twitter/Instagram/Facebook.

About the Los Angeles Philharmonic Association

The Los Angeles Philharmonic Association, under the vibrant leadership of Music Director & Artistic Director Gustavo Dudamel, presents an inspiring array of music from all genres – orchestral, chamber and Baroque music, organ and celebrity recitals, new music, jazz, world music and pop – at two of L.A.’s iconic venues, Walt Disney Concert Hall (www.laphil.com) and the Hollywood Bowl (www.hollywoodbowl.com). The LA Phil’s season extends from September through June at Walt Disney Concert Hall and throughout the summer at the Hollywood Bowl. With the preeminent Los Angeles Philharmonic at the foundation of its offerings, the LA Phil aims to enrich and transform lives through music, with a robust mix of artistic, education and community programs.

About the Hollywood Bowl

One of the largest natural amphitheaters in the world, with a seating capacity of nearly 18,000, the Hollywood Bowl has been the summer home of the Los Angeles Philharmonic since its official opening in 1922 and plays host to the finest artists from all genres of music, offering something for everyone. It remains one of the best deals anywhere in Los Angeles; to this day, $1 buys a seat at the top of the Bowl for many classical and jazz performances. In February 2018, the Hollywood Bowl was named Best Major Outdoor Concert Venue for the 14th year in a row at the 29th AnnualPollstar Awards and was awarded the Top Amphitheater prize at the 2017 Billboard Touring Awards. For millions of music lovers across Southern California, the Hollywood Bowl is synonymous with summer.