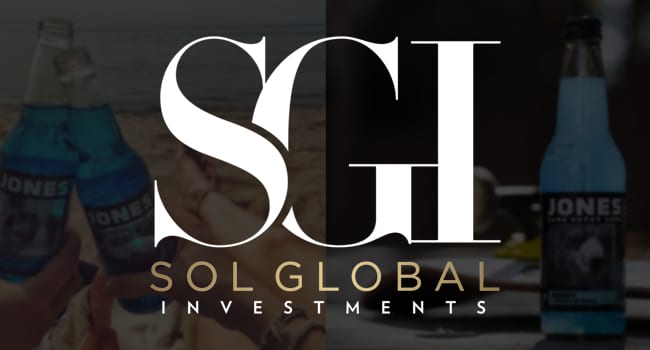 Jones Soda came closer to producing a line of CBD-infused drinks yesterday as Hemp and CBD portfolio company HeavenlyRx Ltd., a subsidiary of SOL Global Investments, announced yesterday it has acquired a 25% stake in the Seattle-based beverage maker.

Under the terms of the agreement, HeavenlyRx paid Jones Soda $0.60 per share for 15 million common shares for a total value of $9 million. The investment also grants HeavenlyRx a warrant to acquire up to 15 million more common shares from Jones at a price of $0.78 (about $11.7 million) within the next 12 months, which could increase its ownership to 39%. HeavenlyRx also has the option to purchase additional stock on the open market which could eventually increase ownership to 51%.

The investment comes four months after SOL Global purchased a 9.8% stake in Jones on the open market. In April, SOL closed a $12 million private placement financing agreement in HeavenlyRx, with the intent that the new subsidiary would acquire a portfolio of CBD and hemp CPG brands in the food and beverage, tincture, oil, balm, and vape categories.

HeavenlyRx will also work with current Jones leadership to develop a new subline of CBD-infused beverages under the Jones brand name.

“We love the brand,” Norman told BevNET. “[Jones] has a long history, it’s iconic, it’s rebellious, and a lot of people know Jones Soda. The equity is very powerful.”

HeavenlyRx will gain two seats on Jones’ board of directors, one of which will go to Norman. Prior to joining HeavenlyRx last month, Norman spent 13 years in various leadership roles at Kellogg, including three years as President of Kellogg North America.

“My role as a board member will be to give [Jones CEO Jennifer Cue] all the support possible,” Norman said. “My background is in CPG, so I’ve spent many years in sales, marketing, and brand building. I think my know-how and experience could come in very handy.”

Cue could not be reached for comment. In a press release, she said she believes that “HeavenlyRx seeking out the Jones brand is a testament to our unique beverages that resonate well with consumers, and we expect their involvement will help accelerate future CBD-infused beverage brand development.”

Jones common stock saw a five-year high in May of $0.86 per share, but had sunk to below 50 cents by the first week of July. As of press time, the stock has climbed by more than 18% to over 60 cents.