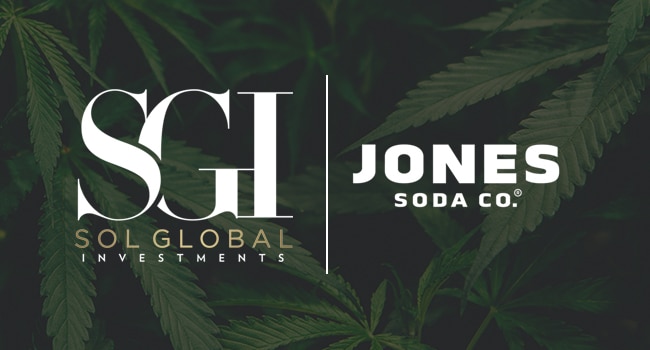 Speaking with BevNET earlier today, SOL CEO and director Brady Cobb said the firm believes Seattle-based Jones is an undervalued company with strong growth potential. Jones’ common stock price was valued at $0.47 per share when SOL made its purchase on March 26, and has been on the rise in the following weeks, trading at $0.70 per share at market close this afternoon. Currently, Cobb said the firm is “just an investor” and plans to have discussions with Jones leadership in order to “get an understanding of what their vision is” and how SOL could “compliment or help” the brand.

The purchase represents a rare investment outside of the cannabis space for SOL Global, which has offices in Florida, Toronto, and London. The company has previously invested in cannabis research and portfolio companies such as ECH Ltd., OG DNA Genetics Inc., and Greenlight Pharmaceuticals Limited.

There are currently no plans for Jones to create cannabis-related products and discussions between the parties have not begun, Cobb said. However, SOL is exploring options for how Jones could work within its broader portfolio, with Cobb adding that the soda maker comes with high brand equity and “a tremendous amount of value that hasn’t been unlocked.”

“You never know where a potential catalyst can come from and I think if you look at what’s happening in the markets that we are focused on, I think that there’s some complimentary things we could do together that could work very well,” Cobb said.

Reached by BevNET earlier this month, Jones CEO Jennifer Cue said she could not comment on the investment or whether it might affect the company’s product innovation. Jones recently added 1,200 Walmart locations nationwide as part of the retailer’s new craft soda set and has added convenience chains include Quick Trip and Circle K stores. The company is also seeking to expand its fountain business in on-premise accounts and Cue hopes to grow the footprint for the company’s Lemoncocco line.

“We’re just generally seeing that buyers are really now very open to having craft sodas in both the convenience channel and grocery,” Cue said. “It’s been an interesting period in seeing the embracement of craft sodas.”

Outside of Jones, SOL remains committed to the cannabis space, including additional plays in food and beverage. This morning, the firm closed a $12 million private placement financing for new subsidiary Heavenly Rx Ltd., a CPG portfolio company which will produce CBD products including oils, tinctures, balms, vapes, snack bars, and beverages. Among the subsidiary’s first product launches will be a CBD alkaline water brand — Blu CBD Water — which will roll out in the Southeast region within the next two-to-three weeks, Cobb said. He added that SOL has recruited several CPG industry veterans to helm Heavenly, which will be partially owned by SOL and also publicly traded with an IPO scheduled in 90 days.

SOL is also continuing to seek out new cannabis investments and has acquired licenses for ventures in California and Florida. According to Cobb, SOL’s primary goal is to establish a stronghold in the cannabis marketplace before broader legalization allows the category to expand nationwide.

“We’re living on airplanes right now, we’re not sleeping a whole heck of a lot, because I see we have a very short window here,” Cobb said. “Our whole team prides itself on being out front and able to identify the brands that can scale across more mainstream platforms. For me it’s not about a sexy dispensary or a cool concept. I want to partner with and invest in operators I know can scale across the U.S. market.”