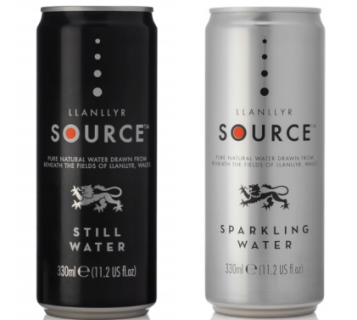 Llanllyr SOURCE, the premium Spring Water and Natural Mixer company, has announced the launch of its still and sparkling water in cans as the brand commits to a plastic free future.

Founded in 1999, the Welsh water and mixer brand has built its reputation amongst the world’s leading restaurateurs and sommeliers for its purity, taste and responsible approach to managing water. It officially stopped producing plastic packaging across its range in June 2019 and anticipates that all plastic will be out of distribution by the end of the year.

Using the same premium still and sparkling Spring Water, the new cans are being launched in a sleek 330ml single serve format.

The look of the new design draws inspiration from the classic SOURCE glass water bottles, with the still water presented in charcoal grey aluminum cans and sparkling in silver aluminum cans. The cans are distributed in recyclable cardboard boxes to ensure no plastic is used in the primary and secondary packaging.

The brand pioneered the world’s first premium water in aluminum cans for UK and US retail in 2009 in response to growing environmental concerns about plastic. Following a trial with retailers, the determination was made that the cans were ahead of their time due to an unfamiliarly by consumers with water products in cans and ultimately the cans were pulled from distribution.

Llanllyr SOURCE founder and environmental enthusiast, Patrick Gee commented: “Ten years ago, in 2009, we recognised that the two biggest issues in the beverage industry were recycling and the misuse of the earth’s natural resources. Given that our water comes from a sustainable source we pioneered water in cans to ensure we had recyclable packaging. We felt we found a way into the convenience market that was consistent with the environmental principles that we have always committed to on our family owned organic farm. However, 10 TRADE PRESS RELEASE NOVEMBER 2019years ago the market was not ready and the cans did not translate into sales so we had to remove them from retail.”

Fast-forward to 2019 and the brand is continuing its investment and committed to packaging solutions and innovation that will minimise its impact on the environment, with the reintroduction of the new modern cans signifying the beginning of exciting things to come.

Patrick Gee continues: “Consumers are now much more familiar with beverages in cans including cold brew coffees, coconut waters and wine. The re-introduction of cans and the removal of plastic bottles from our range is just the beginning of the next chapter for SOURCE. The time for change is now and as a brand we need to be more accountable and responsible. We are preparing for re-launch in 2020 and this will mark a significant stepchange for us which will accelerate our aim to become the category leader for the responsible production and distribution of premium spring water products around the world.”

SOURCE, which is the preferred water brand of some of the world’s leading retailers, Michelin starred restaurants and hotels including The Ritz and EDITION Hotels, has been carbon neutral since 2009 and has been consistently awarded the Green Dragon Award for environmental stewardship, and emphasis on waste management and recycling.

As part of the re-launch in 2020, SOURCE is focused on prioritising its commitment to the environment and will be announcing further initiatives next year.

The cans are available in the UK and US across premium retailers, restaurants and bars. They are sold as single serve items at a suggested retail price of $1.29/99p.

The brand’s water and mixers are also available in 100% recycled and recyclable glass bottles.

SOURCE is an independent premium Spring Water and Natural Mixer company.Since its launch in 1999 SOURCE’s reputation led it to become the preferred water brand of some of the world’s leading Michelin starred restaurants and hotels including Ferran Adrià’s El Bullí, where it was served at the table but also used in the preparation of specific dishes, and The London EDITION Hotel. In 2009 SOURCE pioneered the world’s first premium water in aluminum cans in UK & US grocery stores. In 2016, SOURCE launched a range of premium mixers working with leading mixologists from The London EDITION Hotel.