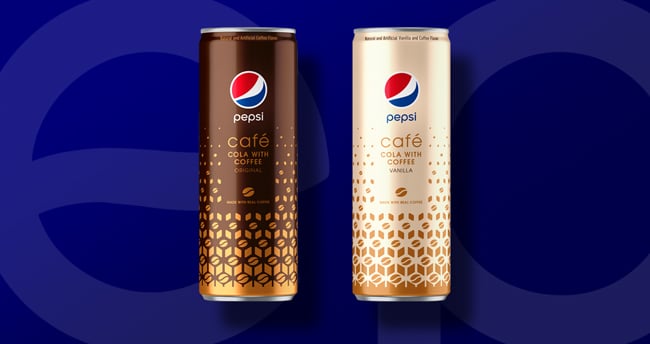 Though not for the first time, PepsiCo is betting that consumers are ready to take their coffee with a splash of soda.

The company today announced the April 2020 launch of Pepsi Café, a blend of Arabica coffee and original Pepsi cola that will arrive at retailers nationwide in Original and Vanilla flavors.

“We know that consumers today are looking for products that meet the needs of energy, indulgence, and refreshment during that afternoon pick-me-up occasion. At Pepsi, we’ve known the potential of blending cola and coffee for years and after striking the perfect balance, we cannot wait to introduce Pepsi Café to the US next year,” said Pepsi VP of marketing Todd Kaplan in a press release. “We are confident that cola fans, iced coffee drinkers and anyone in need of an extra caffeine boost will love the unexpected flavor medley of roasted coffee infused into the refreshing, crisp flavor of Pepsi.”

If this feels like deja vu, you’re not wrong: In 1996, the soda giant tested Pepsi Kona, a coffee flavored version of its flagship soda, in Philadelphia. But despite enlisting singer Tom Jones for a kitschy commercial campaign, the line was discontinued the following year due to poor sales. Other varieties, including Pepsi Cappuccino, have also been introduced in foreign markets.

As is often the case, Pepsi’s new product may soon face competition from a familiar rival. In April, The Coca-Cola Company announced the launch of Coca-Cola Plus Coffee, a blend of coffee and Coke, in more than 25 markets around the world by the end of this year. Like Pepsi, Coca-Cola has attempted several variations on a coffee-based soft drink over several decades, including Coca-Cola Blak in 2006. A U.S. launch for Coca-Cola Plus Coffee has not yet been confirmed.