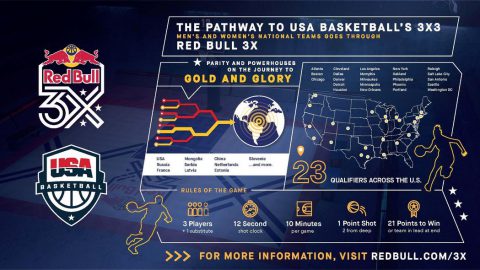 COLORADO SPRINGS, Colo.– USA Basketball has announced a multiyear partnership with Red Bull North America to build an elite pathway for men’s and women’s players who have a goal of competing at the highest levels of 3×3 basketball. The 2020 Summer Olympics in Tokyo will feature eight men’s and eight women’s 3×3 basketball national teams competing for the first time in the new Olympic discipline, with players being identified from the Red Bull USA Basketball 3X Nationals.

As part of the partnership, Red Bull will host more than 20 qualifying tournaments across the country under the newly-created Red Bull 3X series to identify the eight athletes who could potentially represent USA Basketball at the 2020 Olympics. The winning teams at these qualifiers will compete to accumulate enough individual FIBA points with the goal of moving on to the Red Bull USA Basketball 3X Regionals in the Fall of 2019, and then to the Red Bull USA Basketball 3X Nationals in March 2020, which will be used to select the USA men’s and women’s 3×3 national teams.

Additionally, Red Bull Media House, an award-winning media company, will create original storytelling with USA Basketball to shine a light on the 3×3 game, qualifiers and players, and celebrate the journey as the sport makes its debut at the Olympics.

The Red Bull 3X qualifiers, Red Bull USA Basketball 3X Nationals and the 2020 Summer Olympics 3×3 competition will be played on a half court with a 10-minute game clock and 12-second shot clock, where the winner is the first team to 21 points or the team in the lead at the end of the 10-minute regulation.

“USA Basketball has a rich tradition of success on the court, and Red Bull has a legacy in progressing sports and engaging fans, so this partnership is a perfect pairing,” said Jim Tooley, USA Basketball CEO. “Both organizations are synonymous with athletes, groundbreaking events, creative projects and content, and USA Basketball is thrilled to collaborate in this unprecedented partnership to take 3×3 basketball to new heights.”

“Our partnership with USA Basketball furthers our ongoing commitment to basketball and will give wings to the next generation of world-class players,” said Sean Eggert, head of Red Bull Sports in North America. “With 3×3 joining the Olympic movement for the first time in 2020, we are excited to be at the forefront of establishing a pathway to the highest levels of the game, build on our NBA team and athlete partnerships, and energize the sport across the country.”

Chris Mullin, a legend within the USA Basketball family and a member of the famed 1992 “Dream Team,” is an ambassador for the sport of 3×3 and added: “It was an honor to wear USA on my chest and play for my country on a global stage. With 3×3 coming to the Olympics, I want to help grow the sport. I grew up playing 3×3, which is uniquely different than five-on-five. It really appeals to what I love about basketball – fast play, high energy, ball movement and teamwork. This gives so many players a way to keep playing ball and to potentially represent their country.”

Red Bull is now the official energy drink of USA Basketball and will support the USA Basketball Men’s and Women’s National Teams as both look to defend their gold medals from the 2016 Summer Olympics.

Based in Colorado Springs, Colorado, and chaired by retired Gen. Martin Dempsey, USA Basketball is a nonprofit organization and the national governing body for basketball in the United States. As the recognized governing body for basketball in the U.S. by the International Basketball Federation (FIBA) and the United States Olympic Committee (USOC), USA Basketball is responsible for the selection, training and fielding of USA national teams that compete in FIBA-sponsored five-on-five and 3×3 international competitions, as well as for some national competitions and for the development of youth basketball. Connect with USA Basketball at USAB.com and on Facebook (USABasketball and USABYouth), Twitter (@usabasketball, @USABYouth, @USAB3x3, @USABJNT), Instagram (@USABasketball @usab3x3) and YouTube (youtube.com/usabasketball). USA Basketball has conducted 3×3 National Championships in the U18 and open divisions since 2012 and has seen incredible growth in the level of competition over that time. At the international level, USA Basketball has been represented by at least one national team in every FIBA 3×3 World Cup, FIBA 3×3 U18 World Cup and Youth Olympic Games held since 2010.