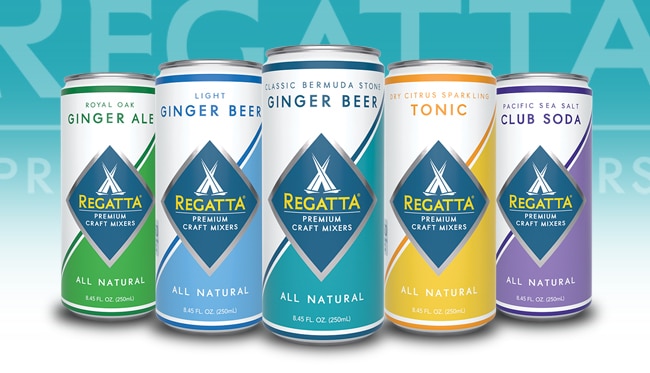 New York-based premium craft mixers maker Regatta is looking to bring an aspirational lifestyle positioning to the category, as it makes the transition from an on-premise focused ginger beer company to one with a broader product portfolio and multi-channel strategy.

Founded in 2006 and acquired by Affinity Beverages LLC in 2016, the company unveiled new branding in March at Natural Products Expo West 2019, showcasing new SKUs and updated packaging designed for brick-and-mortar retail. Sam Zarou, Regatta’s CEO, told BevNET this week he wanted to broaden the scope of Regatta to play in the fast-growing craft mixers space.

Regatta plans to lean into its nautical themed branding; it has adopted the new tagline “Make It Interesting,” Zarou said, noting that Regatta is “an aspirational product” and that the brand will work to reach active lifestyle consumers.

“Go out, interact with nature, enjoy your day and then reward yourself with a cocktail that night,” he said.

After more than two decades in the finance, Zarou purchased Regatta in September 2016. He assembled a management team with CPG expertise in distribution, co-packing, and private equity in order to revise the company strategy and redesign the product portfolio.

Doug Metchick, who has served on Regatta’s advisory board since 2012, was appointed acting CMO. The company also brought on former Phillips Distilling and Brown-Forman executive Brendan Feeley as chief commercial officer.

“The company, from the moment Sam’s group bought into the business, had strong ideas of where to go with the product and we took a calculated 360 degree look around,” Metchick told BevNET. “We really did try to dig into where we thought flavor profiles and ingredients were going and marry that up against where we thought the trends in the industry were going.”

According to Metchick, about 90% of Regatta’s business prior to the acquisition came from on-premise accounts. The revised multi-channel strategy is now also focused on off-premise accounts, including liquor stores, grocery, and the natural channel. For the grocery channel, Regatta has signed with Acosta’s NS Sales division. The new products are currently rolling out, and the brand has secured placement in Central Market and Jewel Osco stores.

“I’ve been in and around the business since 2006,” Metchick said. “The founder and previous owner [Stanley Rottell], who ran the business with excellence, was at a place in his career where it had become known for a long time that the brand needed an injection of energy. What’s happening now had been in concept and discussion for a long time, but we needed that buying group to come in to bring this enthusiasm and energy and resources to it. Without a doubt there’s been several chapters in Regatta’s life but this one is the most exciting.”