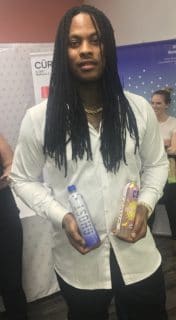 LOS ANGELES— Ghost Beverage, Inc. announced rapper-entertainer Waka Flocka has invested for an undisclosed amount. In addition to funding, Waka will be joining the Advisory Board to aid in building the brand and involvement. Waka’s investment initially made as a gift for his wife Tammy Rivera, is also one of his first power moves in becoming a mogul, following in the footsteps of Sean Combs (P. Diddy), Master P, Jay-Z and 50 Cent, among others. Spending some time away from the industry, Waka has set his sights on full-time entrepreneurialism while juggling family life. With a number of business ventures and holdings, Ghost Beverage will complement his current portfolio by expanding in to new sectors including food, beverage, cosmetics and more.

Waka spoke on his new involvement. “I used to go in the store as a kid and pick up a bottle of soda or water and wonder ‘who made this?’ Now today, I will be bringing that same sense of amazement to millions of kids, as they pick up a bottle of our product.”

With the passing of the Farm Bill earlier this year, Ghost will be launching its next level infusion beverages such as CBD Pink Lemonade, CBD Water, MLK WTR and more. With interest from numerous local, regional and national retailers, Ghost has a springboard quite unlike other brands in the space.

CEO and founder Ryan Carter spoke of the exciting news. “Having a business savvy influencer like Waka involved will bring a lot of opportunities to Ghost with our involvements in not only the food and beverage sector, but our other developments in music, film, events, and technology.”

Ghost Beverage is a wellness brand producing tasty, natural and refreshing functional beverages that are enriched with the right amount of vitamins and other functional ingredients to allow the consumer to overcome the day-to-day challenges of a busy work life, both from physical and cognitive perspectives. Our aim is to help our consumers embrace life with performance and happiness: make every day better, easier and more productive by changing the way people think and drink.