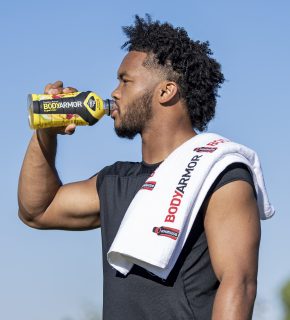 “BODYARMOR is one of the most exciting and competitive brands out there today so I couldn’t be more thrilled to join the team,” said Murray. “I’m always looking to improve my game – and hydration plays a major role in that.  BODYARMOR keeps me hydrated better than anything else out there and I’m excited to join an incredible team of athletes who are determined to grow this brand.”

As part of the partnership, Murray will be featured in national advertising campaigns, retail activations and in digital and social media activations. At 23-years-old, Kyler Murray is one of the brightest young stars in football; he won the prestigious award for the nation’s top NCAA football player in 2018 en-route to being the first overall player selected in the 2019 Draft.

“Kyler Murray is one of the most electrifying, young athletes in today’s game,” said Michael Fedele, VP of Marketing at BODYARMOR. “Given his talent and how much the brand has grown, we’re excited to add a player of his caliber to our already impressive roster and continue showing fans everywhere that today’s top athletes are choosing BODYARMOR.”

Murray, who is currently in his second year as a pro with Arizona and won last year’s Offensive Rookie of the Year Award, joins the BODYARMOR team at a pivotal time for the brand as its growth continues to accelerate and challenge the market leaders within the category. Now the #2 sports drink sold in convenience stores nationwide, BODYARMOR has incredible momentum at retail and is on track for nearly $1billion in retail sales by the end of 2020.

BODYARMOR is a premium sports drink with potassium-packed electrolytes, antioxidants and coconut water and is made with no artificial flavors, sweeteners and no colors from artificial sources. Consumer demand for an premium sports drink has made BODYARMOR the number three sports drink in the U.S. and it has been the hydration option of choice for many professional athletes and millions of high school and college athletes since its launch in 2011.

BODYARMOR is a premium, sports drink that provides superior hydration. It is packed with electrolytes, coconut water and antioxidants and is low in sodium and high in potassium. Created in 2011 by Mike Repole, BODYARMOR contains natural flavors and sweeteners and no colors from artificial sources. In 2017, BODYARMOR launched BODYARMOR LYTE, which has all the same nutrients as BODYARMOR Sports Drink but has no sugar added and only 20 calories per bottle; and BODYARMOR SportWater, a premium sport water created for those with an active lifestyle with a performance pH 9+ and electrolytes for sport. In August 2018, The Coca-Cola Company purchased a minority stake in BODYARMOR, making them the second largest shareholder behind Repole.